An amazing Dominican digital artist named Albert Pierrea who is living in St. Thomas has created a comic universe based around the african diaspora living in the Caribbean.

This comic universe he has created includes the stories of Super Dominica as well as the Caribbean Justice League. Each story and character includes the culture, history and geography of the Caribbean and celebrates the diversity of skin colors, hair textures and physical features of the people living on the islands.

We at WatchTheYard.com came across a list of the characters and were happy to see the amount of powerful black women shown in this action-packed universe. If you are interested in leaning more about the universe check out the artist’s Facebook page and website.

Click on the arrows below to see some of the characters and their bios! Share this with someone from the Caribbean and make their day!

(Pierra is not finished illustrating the entire universe but has stated online that every island will be represented.) 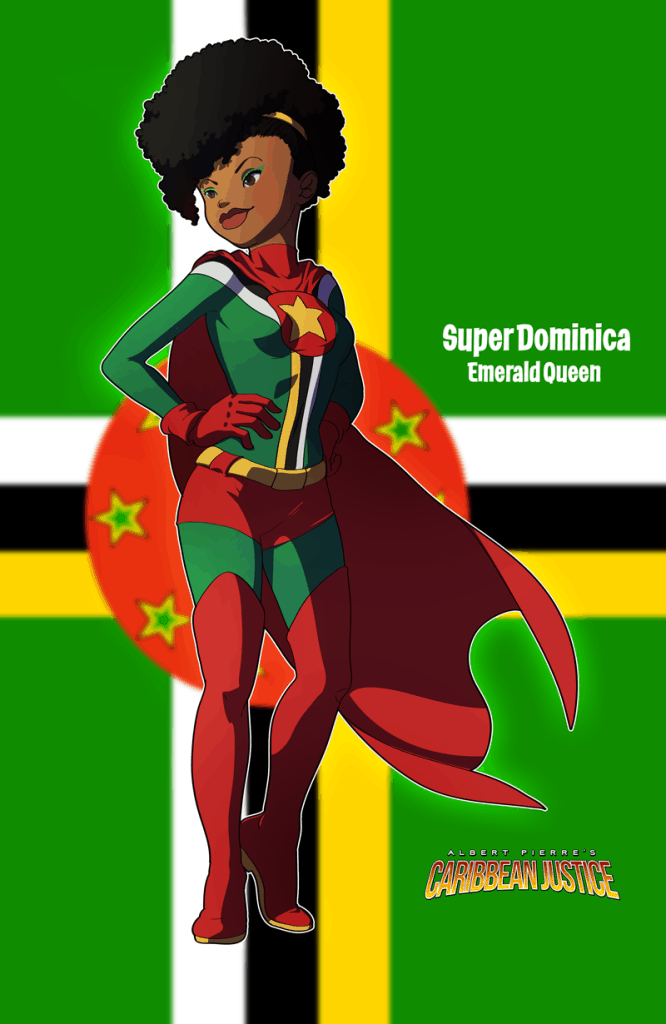 One of the most mysterious members of the Caribbean Justice Alliance. She is said to reside in the forests of Dominica. She is different from the Kalinago Super Dominica in many ways. Her strength resonates with the trees, vegetation and forestry. Kalinago Super Dominica can communicate with animals. This one has a direct link to plants. The members of CJA are sometimes confused as to whether she is very confident or just plain insane. Like Scarlet (Tobago) this flavor of Super Dominica doesn’t seem to be afraid of anything. She talks a lot when she fights and would often succeed with annoying the enemy and even members of her crew with smart talk. They have never seen her alter ego/ normal state. They’ve also never really seen her angry. Yurumei (St. Vincent) believes that the Emerald Queen is hiding a lot of her power. A lot of her attacks are speed-based but it is still Yurumei still has a hunch that her power would increase should she ever get angry. She is a big fan of natural hair and would rather roll with Solar Flare(Antigua) also a natural hair fanatic. Afro Super Dominica is one of those girls who is not afraid of frogs. When you are a forest girl that’s the least of your worries. She has giant frog as a pet will sometimes appear in times of desperation. She can fly and focus nature energy and at time combine powers with Kalinago Super Dominica for more effective attacks. Yurumei believes that the Legendary Captain Dominica may have more info on Afro Super Dominica’s origins. She plans to find out more from him.

Click on the arrows below to see the rest of the characters.