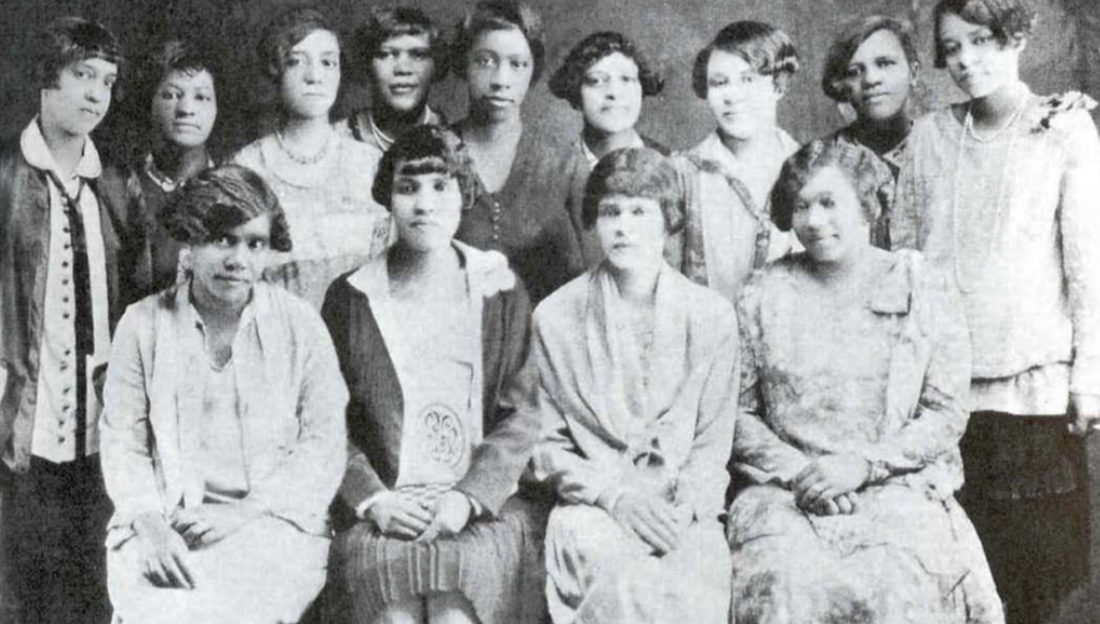 This article is the second part of a two-article series highlighting Black Greek life in the Midwest. The first article can be found here.

In the years following the end of the First World War, African Americans saw several changes in the landscape of higher education. The most prominent was the dramatic increase in the number of Black college graduates. According to sociologist Charles S. Johnson between 1921 and 1929, the number of degrees awarded to African Americans increased from 767 to 2,141 — representing a 179% increase over nine years.1

The increased enrollment of Black college students reflected the strengthening of Black public education in the South. Historian Lester C. Lamon states, “by 1920 Black public education in the South had far advanced” and “buildings numbered in the thousands and state support had been assured,” although unequally distributed.2 By 1920, the majority of Black college graduates were overwhelmingly located in the South. With better public schools, Black institutions of higher learning (now known as HBCUs) could immerse themselves in college coursework and discontinue their emphasis on high school curriculum. For example, in 1920, Hampton Institute in Virginia moved away from granting diplomas to awarding B.S./B.A. degrees — reflecting their new status as a post-secondary institution.3

However, with the terrain of Black higher education moving to the South, the Midwest remained a site of vitality, especially for Black Greek Letter organizations. In November 1922, seven school teachers previously enrolled at Butler University in Indianapolis and the State Normal School in Terre-Haute, Indiana, founded Sigma Gamma Rho sorority. Sigma Gamma Rho was started amidst tense racial hostility in Indianapolis– just a few miles away from the sorority’s birthplace on the campus of Butler University was the Ku Klux Klan’s Grand Wizard’s residence, illustrating the resilience of the sorority’s founders.

Sigma Gamma Rho’s founders desired to create a network of teachers working to improve the social conditions in the Black community. A write-up on the sorority appearing in the prominent Pittsburgh Courier declared in 1923, that the sorority is for those “above high school grade, who are striving to become teachers.” At Wilberforce University, Sigma Gamma Rho’s Kappa chapter had over twenty members — within one year of the chapter’s chartering. An overwhelming majority of its members were enrolled in the Normal Department, pursuing teacher’s certification.

Thousands of African Americans began migrating to Chicago after World War I, contributing to the city’s new character. By the 1930s, Chicago emerged as a center of Black social, cultural, and political life. Although New York City was also considered the epicenter of Black culture, Chicago too had a burgeoning renaissance. There was a sizable Black artistic and literary community and a pioneering set of Black politicians, which included the first Black Congressman Oscar De Priest, his successor Arthur W. Mitchell (Phi Beta Sigma), and the first city’s municipal judge Albert B. George (Alpha Phi Alpha). Chicago was also home to prominent Black institutions, churches, fraternal lodges, and a hospital. By the mid-twentieth century, Chicago had been affectionately known as “the Black Metropolis.”

The Adams family was a part of a wave of Black professionals relocating to Chicago during the Great Migration. Numa P.G. Adams, a native of Virginia, and his wife Osceola, a native of Georgia, moved to Chicago in 1919 with their son Charles. The family decided to move so Numa could pursue a medical degree at Rush Medical School, at the time an affiliate of the University of Chicago. Numa, a graduate of Howard University, was a part of a generation of Black physicians that pursued medical degrees or applied for residencies in midwestern and northeastern cities. These institutions were more likely to admit Black candidates than their southern counterparts.

Numa was a prior Executive Treasurer of Alpha Phi Alpha and most likely remained involved in the fraternity through Alpha’s Chicago alumni chapter– Xi Lambda. Osceola was a founder of Delta Sigma Theta and chartered the sorority’s Chicago city-wide chapter, Lambda,  1921. She even served as Lambda chapter’s first President from 1921 to 1923. Following her stint as chapter president, Osceola served as National Treasurer for Delta.

Chicago was home to Crane Junior College — a prominent junior college that received the label the “people’s college” because it provided subsidized education for its students. In September 1911, the Crane Technical High School opened its doors in Chicago. By 1916 Crane offered “two years of college work free of charge” to residents of Chicago. And by 1929, an estimated 4,000 students were enrolled at Crane — making it the largest junior college in the country.

D9 organizations were exclusively chartered at four-year colleges, prompting Black students at junior colleges to establish their own local sororities and fraternities. For example, during the fall semester of 1926, “a group of girls received a charter from the Student Council” to establish the Sigma Lambda Sigma sorority at Crane Community College. During their first program year, the sorority hosted “two luncheons” and gave “numerous card parties.” The sorority’s colors were blue and white.

The same semester “a group of twelve young men petitioned the Student Council” to establish the Beta Phi Omega fraternity. The fraternity boosted having the most members of any other fraternity at Crane. The installation of officers held in April 1931 attracted more than 200 guests. The prominent Chicago defense attorney Euclid L. Taylor installed the fraternity’s officers, revealing this group’s significance among Chicago’s Black professional circles.

Outside of Chicago, Black college students at midwestern colleges during the 1930s and 1940s broke several barriers — allowing them to secure coveted positions and titles on-campus. For example, for the 1934-1935 academic school year, the Iota Psi chapter of Omega Psi Phi fraternity at the Ohio State University earned the highest GPA out of all Greek Letter Organizations on OSU’s campus.

Four years later, Dorothea Mae Williams, a native of Philadelphia and English major at the Ohio State University, was elected “Miss Homecoming.” Williams competed against three other students but still won “by a handsome margin.” Williams, a member of the Epsilon chapter of Delta Sigma Theta, also excelled academically at OSU. In addition, she held the distinction of being the only Black member elected to the National Honorary Greek fraternity — Delta Phi Alpha.

Roy C. Darlington, a member of Phi Beta Sigma and native of Massillon, Ohio, maintained an extremely high-grade point average during his tenure in the College of Pharmacy at OSU. During his junior year, Darlington was elected to membership in the Phi Rho Alpha honorary pharmacy fraternity. In 1943, Roy Darlington was the first African American to receive an M.S. degree from the College of Pharmacy at OSU. In 1947 he made national headlines when he became the first African American to graduate with a Ph.D. in pharmaceutical sciences.

Currently, there are three D9 presidents that were either initiated or currently reside in the Midwest. Dr. Willis Lonzer, the 36th General President of Alpha Phi Alpha, resides in Chicago and is affiliated with the fraternity’s Xi Lambda chapter. Danette Reed, the 31st International President of Alpha Kappa Alpha, resides in Dallas but was initiated into AKA at Northwestern University in 1976. Reuben A. Shelton, the 34th Grand Polemarch of Kappa Alpha Psi, was initiated at Mu chapter at the University of Kansas. He currently resides in St. Louis. The Midwest of today, like that of the past, continues to thrive and remains the home region or region of initiation for scores of lauded leadership within the D9.

About the Author: Marquis Taylor is a third-year history Ph.D. student at Northwestern University. His work specializes in late 19th and early 20th century African American history. In the spring of 2018, he was initiated into Alpha Phi Alpha’s Beta Chapter seated at Howard University.