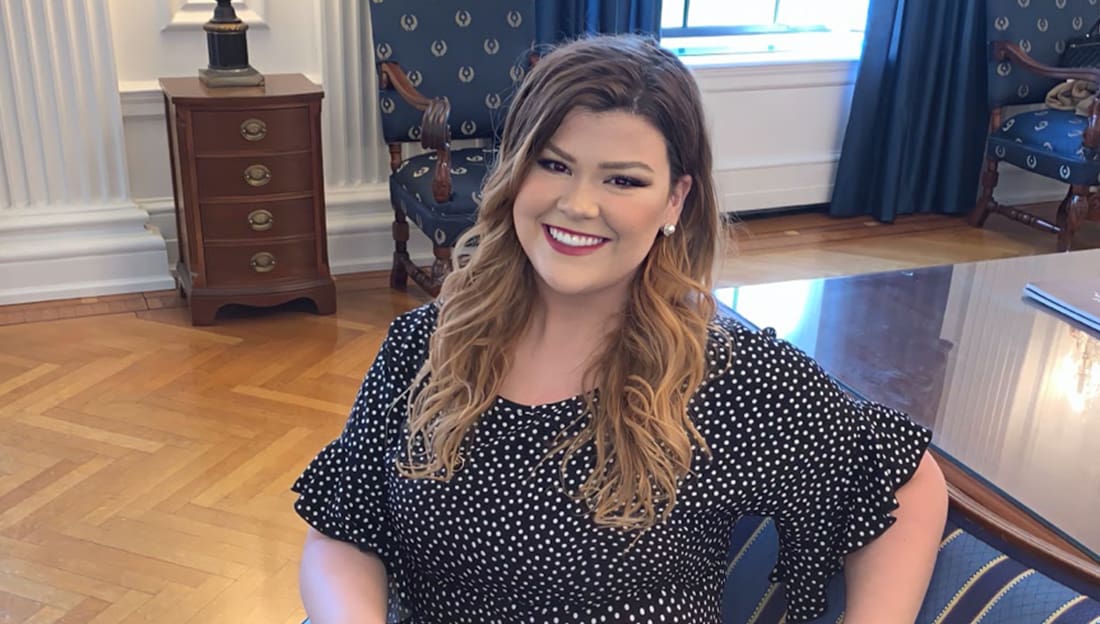 In an effort to highlight the people who are leading universities across the nation, we at Watch The Yard reached out to the HBCU West Virginia State University and did an interview with Colleen Miller the Student Government Association president.

The position of SGA president of a is a highly respected role and there is a special pride that one takes. Miller, who is majoring in International Business and International Studies, is a current Senior.

We interviewed Miller, and talked to her about her position, goals, future and what it means to hold this type of leadership position in 2020.

The biggest thing that I have learned as an SGA President, is communicate with your constituents, and to never forget why you took this job in the first place. For me, an important part of becoming SGA President was to make myself easily available for students who needed to talk, rant, whatever- I would be there. I would go to the sporting events, campus events, and even to the cafe, and make a point of speaking to students about what they would like to see happen, what they need, and what they want. In this role as SGA President, my main focus, and my only focus, was to serve my constituents-the students of West Virginia State University from the very beginning. Days that I would feel emotionally drained, I would always take a walk around campus and just take a few minutes to remember that.

What made you decide to attend West Virginia State University for undergrad?

West Virginia State University has been a big part of my family for a long time. My grandmother attended WVSU, my Dad graduated from WVSU, and my brother also attended WVSU. Growing up attending State basketball and football games created so many special memories for me, and choosing to attend WVSU was an easy decision. I love this school and everything it meant to my grandmother as well as my Dad. I am so proud to carry on their legacy as a graduate as West Virginia State University.

How has West Virginia State University molded you into the person you are today?

West Virginia State University has truly changed my life. It has molded me into the person I am today in so many different ways. My freshman year, I never really considered myself a leader, not even a follower necessarily, I just didn’t participate. I was fairly depressed my first year in college because of personal issues and up until my sophomore year, I was just unhappy in my life.

August of my sophomore year, I had reached my highest weight of over 300 pounds, and had begun to lose interest in classes. In September, I found out that I had been accepted into the Disney College Program for the following Spring, with the help of several of my professors and my Adviser. Once being accepted, my life began to change very fast, I began to get involved on campus and became the sophomore class senator, and began losing weight. By the time I left for my internship in January, I had already lost a total of over 60 pounds.

I continued this journey throughout my internship, and when I returned the following August, I was a completely different person. I had grown so much intellectually, socially, and emotionally. I met so many different people from across the world, and being exposed to so many different cultures humbled me greatly. My work ethic had improved drastically upon coming back to WVSU, and I was so excited to get involved.

I interviewed to become the SGA Chief of Staff that December and started a month or so later, and continued that job up until I ran for Student Body President in April.

Since becoming Student Body President, I have learned so much about myself and about how to be a great leader. I have been tested emotionally and physically and have still always put the needs of WVSU students first. It has been the absolute honor of a lifetime to serve in this role, and I have taken every single interaction with every student to heart, and I appreciate every moment I have had on the beautiful campus of WVSU. The opportunities I have had at WVSU have changed my life significantly, and I will forever be grateful for the ability to attend such an outstanding university.

This past year, my administration has worked very hard on the initiatives we set to accomplish during out campaigning process. As of October, we had accomplished all of them. Our plan included: restructuring our Freshmen Experience class to include more University History, using surveys to gauge student interest, creating a Freshmen SGA Internship, dedicating the TVs in the cafe and Student Union for campus events and activities, forming a homecoming committee.

During the campaign process, my Vice President running mate and I wanted to help create a designated student section for each sports arena, as well as creating areas for students to tailgate before games. We were able to successfully create an area in the football stadium and basketball arena for the student section. We were able to get over 150 custom student section tee shirts donated to pass out to students during the January 26th basketball game against our rival. With the help of our University President, we were able to designate the lot beside our baseball stadium, for exclusive student tailgating for football games, as well as getting proper facilities for bathrooms and trashcans donated. With the creation of a student section, our community has certainly gotten more involved at the sporting events. We have increased attendance as well increased the sales of the concession stands.

Outside of campaign promises, we have also worked to increase opportunities for students to get involved on campus and in the community. We have hosted a blood drive, created a grad student senator position, as well as hosted several events for Black History month. Before COVID-19, SGA was also planning to help host a Graduate School Fair, another Blood Drive, a student athlete appreciation day, and a “State Choice” Awards Night. These events would have been excellent to help our students and community, but moving forward we will just continue to become more creative with new initiatives to improve our school and community.

Thankfully, we had concluded our campaign period, and voting period before our spring break, so all that was left to do was to release the results. Since releasing the results, our Administration has done several Zoom meetings to train the new administration and ensure a smooth transition.

Leadership is a powerful word to me, and I think that it can mean a lot of different things. Being able to recognize the best qualities in a person and to give them the opportunity to use their talents, is an important facet of being a great leader. Surrounding yourself with like-minded people whose strengths complement your weaknesses is the best way to create an efficient, well-rounded, and powerful team.

With the current situation we are in, and schools across America having to go online, this is a perfect time for SGA and different Universities to get creative with ways to represent themselves online. Our school has begun working on creating online New Student Orientations, as well as virtual walk-through tours of the campus. Having a strong presence on social media also helps to reach new audiences as well.

Why do you think Watch The Yard is important to college culture?

I think that having different outlets, such as Watch The Yard, is important to HBCUs. In order to preserve the history of HBCU’s and cultivate the culture within those colleges, students must be able to access information on those schools.

I find Watch The Yard an incredible resource for current students, and hopeful students alike, in that they are able to see how different schools celebrate their HBCU culture. Having such a large news and media website recognize the importance of black college culture and black fraternities/sororities, empowers the next generation of leaders across the United States.

After graduation, I plan on attending University of Florida to attain my Master’s degree in International Business.

We at Watch The Yard would like to thank Colleen Miller speaking to us about her work as the SGA president of West Virginia State University.