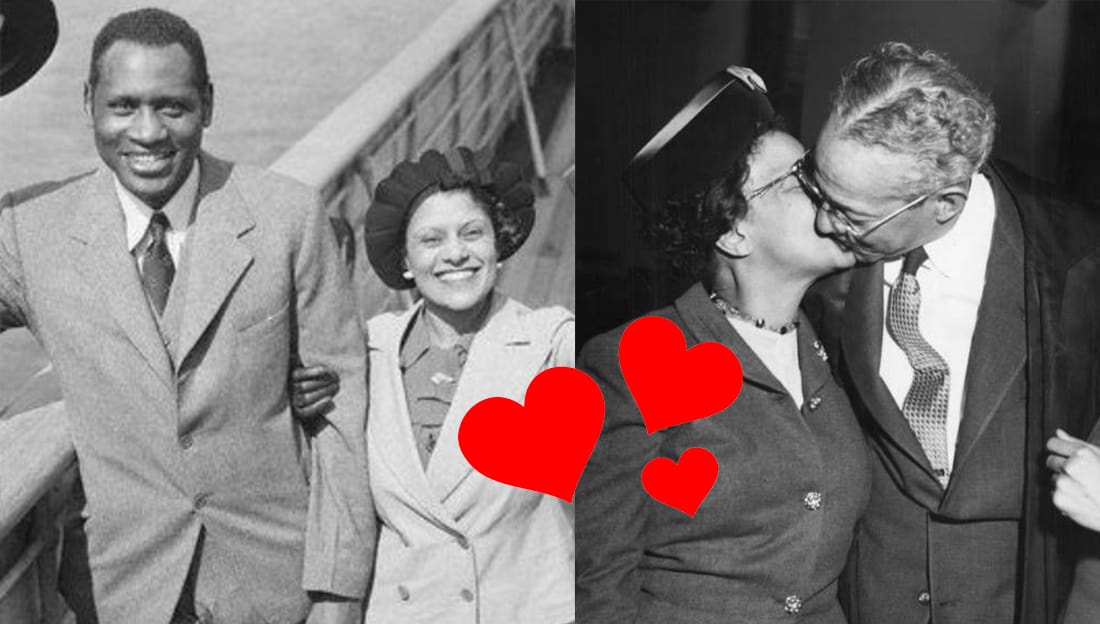 Beautiful Black fraternity and sorority couples have existed over 100 years so let’s celebrate their love.

We’ve compiled a list of some of the prominent D9 couples from the Harlem Renaissance era. These brothers and sisters loved each other and did it all while making an impact on their community.

Eslanda Goode and Paul Robeson were married in August of 1921. This popular couple spent a majority of their professional career traveling internationally, performing in shows, and writing and speaking extensively about pan-african struggles. Goode was initiated into Alpha Beta now the New York graduate chapter of Delta Sigma Theta in 1921 and Robeson was initiated into Nu Chapter of Alpha Phi Alpha at Lincoln University.

James Edward Scott served as the 10th Grand Polemarch of Kappa Alpha Psi. In 1940, he was a member of the “Committees for Participation of Negroes in National Defense”– an advocacy group started to create more employment opportunities for African Americans in the War efforts during the on-set of World War II. Bobbie Beatrix Scott served as Alpha Kappa Alpha’s 5th Supreme Basileus from 1927-1929. During her tenure she increased the number of Foreign Fellowships the sorority awarded.

Roy W. Tibbs, founder of the Howard University Glee Club, married world renowned opera singer Lillian Evanti in October of 1918. Tibbs was trained at Fisk University, the Oberlin Conservatory of Music, and did additional coursework in Paris. Evanti sang alongside the likes of Marian Anderson, in front of international audiences in South America and France, and before First Lady Roosevelt. The couple’s Washington, D.C. home was designated a National Landmark.  Both Tibbs and Evanti were extended Honorary Membership into Phi Beta Sigma and Zeta Phi Beta Sorority, respectively.

Julia Washington Bond, a 1929 graduate of Fisk University, worked as a librarian. Her husband, Horace Mann Bond served as the first President of Fort-Valley State University in Georgia and Lincoln University of Pennsylvania. The couple had two children, the late civil rights activist Julian Bond and Jane Bond Moore. Horace was a member of Kappa Alpha Psi and Julia was a member of Delta Sigma Theta.

Dr. Allison Davis was a gifted scholar who’s ground-breaking research on race, class, and education contributed to the creation of Federal Head Start programs throughout the country. His wife Elizabeth played an instrumental role in Allison’s research, serving as his research assistant and most trusted advisor. Allison was a member of Omega Psi Phi; Elizabeth was a member of Delta Sigma Theta— she chartered Delta’s New Orleans graduate chapter in 1936.

Mary Church Terrell, a leading suffragette of the 20th century, was inducted into Delta Sigma Theta as an Honorary member in the spring of 1913. Two year later she authored the Sorority’s Oath at the request of Alpha Chapter Delta Sigma Theta.

The Miller’s were a prominent Brooklyn couple. Both Anna and Alexander were educated at the City College of New York, she studied art and he studied physical education. Anna, a member of Alpha Kappa Alpha, taught in New York City public schools. Alexander, a member of Omega Psi Phi, a public school teacher, instructor at the YMCA, and a leader within the Brooklyn Branch of the N.A.A.C.P

Sadie T.M. Alexander (left) and Raymond Pace Alexander (right) were a Philadelphia legal power-couple who wed in 1923. Sadie was the first African American woman to graduate from the University of Pennsylvania Law School and the first African American woman admitted into the Pennsylvania Bar. Raymond, a Harvard trained attorney, served as judge on the Philadelphia Court of Common Pleas. Sadie T.M. Alexander served as the first National President of Delta Sigma Theta from 1919 to 1923. Raymond Pace Alexander served Alpha Phi Alpha as First Vice President from 1922 to 1924.

Maudelle Brown Bousfield was elected 6th Supreme Basileus in St. Louis at the sorority’s 12th Boule. She focused on the reclamation of inactive members.

Midian O. Bousfield, a member of Kappa Alpha Psi, had an impressive record of achievement in his professional career. He was the first African American colonel within the Army’s Medical Corp and Chicago Public School Board.