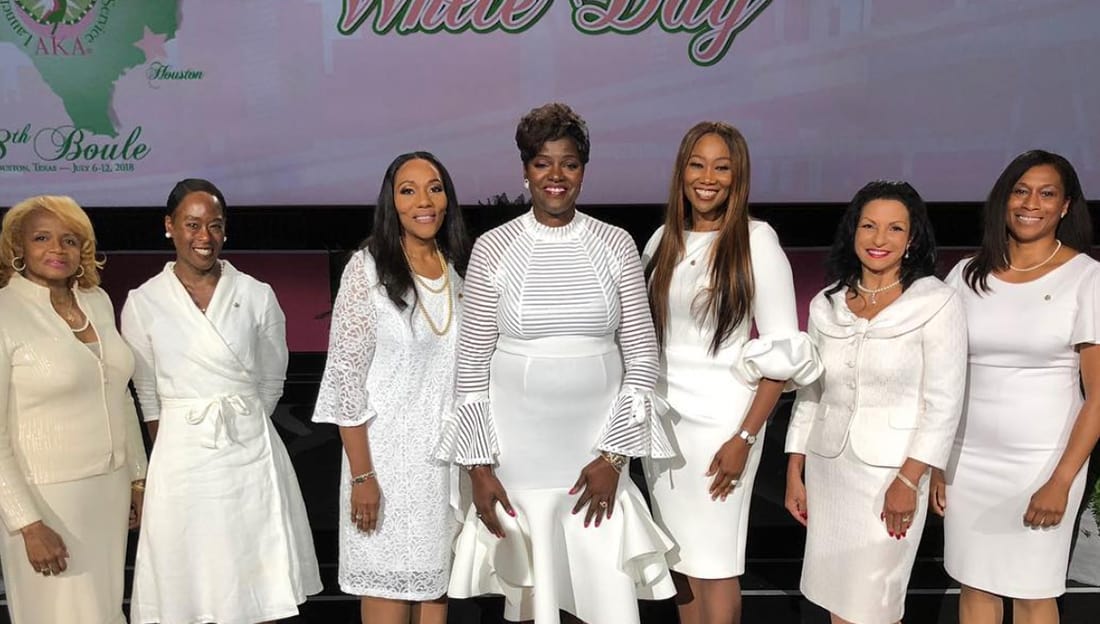 International President Dorothy Buckhanan Wilson, L.H.D. led the induction ceremony at the Sorority’s biennial conference in Houston. She noted that the Sorority, the oldest organization founded by black college-educated women, bestows honorary membership upon women with high ethical standards who have achieved international recognition for their outstanding contributions.

“Each of this year’s inductees have demonstrated remarkable strength and perseverance to achieve her goals and have a positive impact on the world,” she said.” Most importantly, these women have done so with a commitment to serving others, a hallmark of Alpha Kappa Alpha.”

Ms. Yolanda Adams is a five-time Grammy award-winning artist whose music heals, encourages and inspires. She has carried the torch for contemporary gospel and inspirational music through her 13 glorious albums. The Houston native and former teacher is filled with the spirit and blessed with one of the most powerful voices in the industry. Her pioneering blend of modern gospel, R&B and a touch of jazz continues to inspire her fans and transform the musical landscape. Ms. Adams is also the host of “The Yolanda Adams Morning Show” a fun, clean alternative morning show for people of faith.

Ms. Teta V. Banks is the National Chairman of the United Nations Association of the United States of America (UNA-USA). Born in Nigeria, she is the first person of African descent to hold this position in the organization’s 70-year history. Ms. Banks leads the National Council that develops, recommends and implements programs and advocacy initiatives to address human rights issues such as human trafficking, poverty, education, environmental justice, gender equality, global health, injustice, racism and sexism. She is also a faculty member at Prairie View A&M University. Prior to joining UNA-USA, Ms. Banks served as Executive Director of the King Association for Nonviolence, in conjunction with the King Center.

Dr. Jeanette J. Epps was selected in July 2009 as a member of the 20th NASA astronaut class. The New York native was a NASA Fellow during graduate school and authored several journal and conference articles describing her research. Dr. Epps worked for Ford Motor Company where she received both a provisional patent and a U.S. patent for her research. She later joined the Central Intelligence Agency (CIA) for seven years, working as a Technical Intelligence Officer before becoming an astronaut. She currently serves in the ISS Operations Branch working on issues in support of space station crews.

Mrs. Chantél D. Harris is a human rights activist and the great-great granddaughter of Alpha Kappa Alpha Founder, Ethel Hedgeman Lyle. Mrs. Harris’ commitment to helping others started at a young age. Through her church she served the homeless and worked with the Circle of L.O.V.E (Let’s Overcome Violence Everywhere) program that was started by her grandmother and member of Alpha Kappa Alpha, Muriel “Puff” LyleSmith. Mrs. Harris continues to advocate for women and children in her community. She is currently working to eliminate hostile work environments and workplace bullying.

Ms. Margo Lee Shetterly is the author of the book “Hidden Figures: The American Dream and the Untold Story of the Black Women Mathematicians Who Helped Win the Space Race.” Shetterly is also the founder of The Human Computer Project, an endeavor that is recovering the names and accomplishments of all of the women who worked as computers, mathematicians, scientists and engineers at the National Advisory Committee for Aeronautics (NACA) and its successor NASA from the 1930s through the 1980s. In 2014, Ms. Shetterly received the Alfred P. Sloan Foundation Fellow and was a Virginia Foundation for the Humanities grantee. She is a native of Hampton, Va., where she knew many of the women behind the history in Hidden Figures.

Alpha Kappa Alpha Sorority, Incorporated (AKA) is an international service organization that was founded at Howard University in Washington, D.C. in 1908. It is the oldest Greek letter organization established by African-American college-educated women. Alpha Kappa Alpha is comprised of nearly 300,000 members in 1,024 graduate and undergraduate chapters in the United States, Liberia, the Bahamas, the U.S. Virgin Islands, Germany, South Korea, Bermuda, Japan, Canada, South Africa and the Middle East. For more information on Alpha Kappa Alpha Sorority and its programs, visit AKA1908.com.

Did You Know These 15 Trailblazers Are Non-Honorary Members Of Alpha Kappa Alpha?