Thursday January 28th, 2016 marks the 30th anniversary of the Challenger space shuttle exploding in 1986 just 73 seconds after taking off over Cape Canaveral for its tenth mission. Many who were alive during this time may remember watching the tragedy on live television and the sadness that covered the nation after, but many do not know that among the seven killed was a member of Omega Psi Phi Fraternity Inc., Dr. Ronald McNair.

McNair was born and raised in Lake City, SC. As a young child he was fascinated by space exploration and learning. His search for knowledge was so great that in 1959, he refused to leave the segregated Lake City Public Library because they would not allow him to check out books. The police and his mother were called and he was eventually allowed to borrow the books and now that library is named after him. The following cartoon for children was made about his encounter as a child with segregation.

In 1978, he was selected as one of thirty-five applicants from a pool of ten thousand for the NASA astronaut program. He flew on STS-41-B aboard Challenger from 3–11 February 1984, as a mission specialist becoming the second African American to fly in space (The first African-American in space, Guy Bluford, just so happens to be a member a separate black fraternity, Kappa Alpha Psi Fraternity).

McNair was a great example of an Omega Man, not only was he mentally strong, he was also physically strong, earning a black belt in karate and writing extensively about martial arts. “A study he co-wrote about the physics of karate kicks inspired another man who shared McNair’s unconventional passions: Neil deGrasse Tyson,” New York Daily News states. “An astronaut who was also a black belt in karate served as a kind of affirmation that an athletic hobby need not interfere with academic pursuits,” Neil deGrasse Tyson once said about him.

Dr. McNair was selected for a NASA flight, which launched on 28 January 1986, and was killed when Challenger disintegrated just nine miles above the Atlantic Ocean under a minute after liftoff.

While he is no longer with us, his legacy lives on. McNair has a crater on the moon, a buildings at MIT and North Carolina A&T and over 23 K-12 schools named after him. Along with this, the U.S. Department of Education offers the TRIO Ronald E. McNair Post-Baccalaureate Achievement Program for students with low income, first generation students, and/or underrepresented students in graduate education for doctorate education.

Share this article with your network on social media as we collectively remember this amazing man of Omega Psi Phi today; Dr. Ronald McNair. 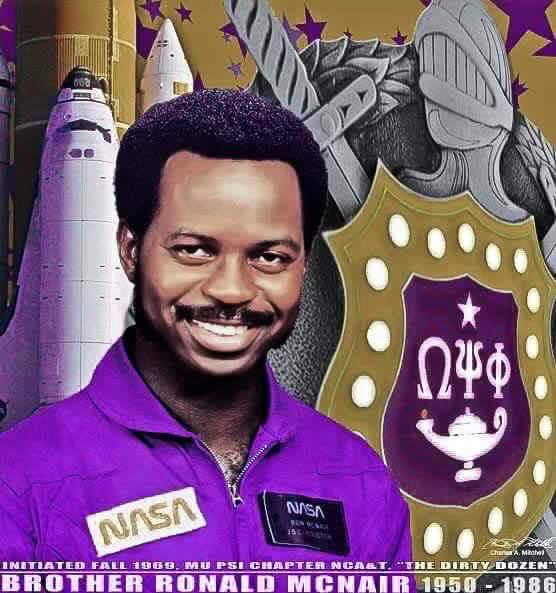 Click on the arrows below to see more pictures of McNair including the one of him playing saxophone on a spaceship!