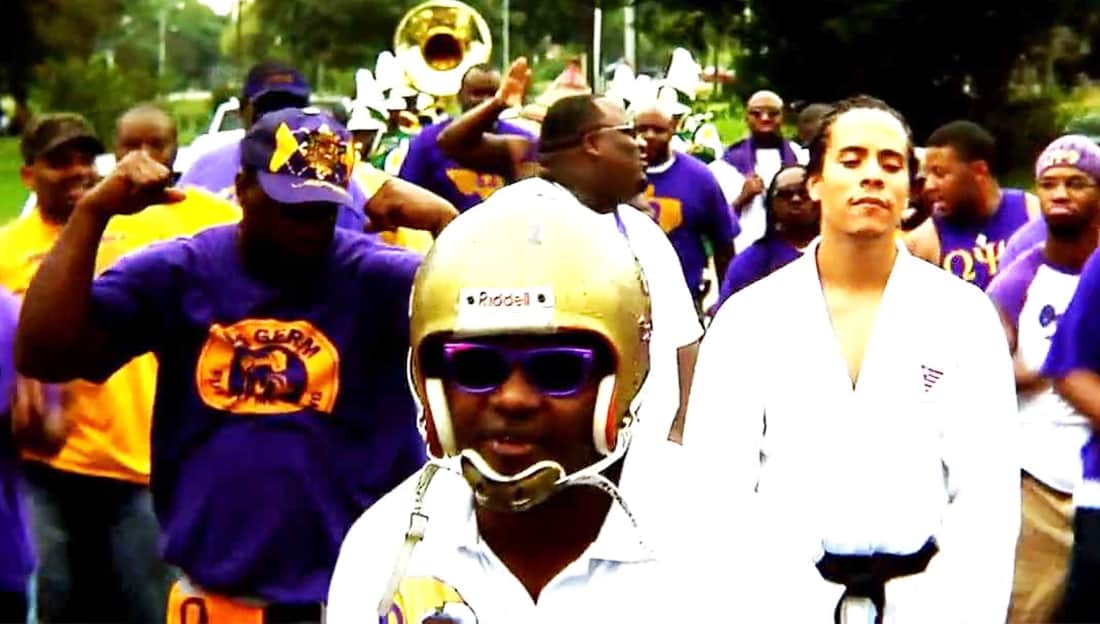 In 2006, Pinc Gator released, ‘I’m A Que’, a song that is arguably one of the best songs written by a member of a D9 org that is dedicated to their org in the last 20 years. The song, ‘I’m a Que’, was an instant hit on yards across the nation and can still be heard at step shows, yard shows and homecomings nationwide.

In a move to document the ever-developing history of Black fraternity and sorority culture, we Watch The Yard reached out to Pinc Gator to talk to him about the song, its success, his collaboration with Shaq on the remix and how making the song 12 years ago changed his life.

What made you want to come up with the song?

Somebody had written the obituary of Omega Psi Phi and when I read it, I was shook.  I had just crossed and from the recent literature I was immediately self motivated to leave my mark in our Fraternity.  Considering I am a recording artist it only made sense to do that through song. In 2005ish the song came to mind late one night while cow tipping and listening to N.O.R.E.’s  I’m A G.  I did not record it until 2006.  I told my producers @BeanzNKornbread if they could put the funk to it we could make history.  I let them hear my rough version.  They immediately went outside and got their equipment and created the funk on the spot.  After 33 minutes of creating, we came to the conclusion history had just been made.  That was our first time working together.  They have been my Ride Or Die producers and friends for 12 years.  They have never turned their backs on me.

How has making the song changed your life?

The creation of the song itself has allowed me to obtain and maintain a global platform.  With that being said it has allowed me to reach people and connect with people from all walks of life.  I can’t lie, its dope as hell knowing your song is played at most NPHC functions globally 24/7 and the Milfs and Cougars like it too.  It has contributed to me being able to mentor youth all across the world.  It took a while for me to realize that although the financial success hasn’t arrived yet,  the ability for me to help uplift our people has been from my platform has been the bigger picture.  With that alone I am spiritually wealthy. The song itself has allowed also to travel all over the world performing and speaking life into our youth.

The music video, solidified it as an iconic song in the early days of YouTube. What is the story behind the music video?

Music itself and the nature of promotions and marketing has totally changed since 2006.  One thing that has remained the same is music videos.  People still want to see music videos.  I had performed at a hole in the wall one night, and a guy named John Hale (Bleedthrough Productions) heard my song.  He doesn’t even listen to rap but was enthusiastic about shooting a video for this song.  We pretty much shot the video on the fly but understanding the weight of its potential. The only thing planned in the video was the elderly lady, the kid, the marching band and the 3rd Ward Mansion Frat house.  Everything in between was on the go.  Everybody present fe;t history being made.  Along with many people, a good friend Quiana Freels was very instrumental in making this happen also.  I did not know much about youtube during these times.  She schooled me. John Hale brought the music video to life and I am forever thankful.

What is the story behind Shaq getting on the remix?

Shaq was renting a car from the car rental place I was working at at the time. I asked him had he heard “I’m A Que”, and he hadn’t at the time.  As I was walking him to his tiny Tahoe he was renting I ran to my car to give him a cd. (Artists, always stay ready).  I never told him I was Pinc Gator. I just told him to listen to that guy.  As he drives off, my co-worker called me an idiot for not telling Shaq that its my song and Im an artist. I told my co-worker that the Universe will return the love.

Two days later my Frat brother Kendrick Smith @actorKendrickSmith called me at 2:43AM saying Shaq heard the song and wants to record.  The next day at 7:55pm, Shaq was at my studio recording his verse.

Forever thankful to KD. He wrote it on the spot (yea I had him change a few lines).  He could’ve told me to shut up, but the QueDom was brewing too strong. I was gonna just keep my old verses and he told me to stop bullsh****ng and drop a new verse its a remix.  The new verse on that track is a freestyle on the spot from Shaq pulling rank on me lol. Although we never officially released the song (cough, cough stares at Shaq lolol) this was definitely a highlight in my music career. Ill always thank Shaq. Two years later George “P-Funk” Clinton came through and we did the Centennial Remix.

What are you working on today?

Since “I’m A Que” initially, I have released 8+ projects, (Tidal, iTunes, Spotify, Bootleg Man) and a slew of fight songs for schools and teams such as Sam Houston State, Baylor, UT (Austin) Alabama, LSU, Raiders, NY Giants, and the Houston Texans. I have recorded with Kevin McCall, George Clinton, Killa Kyleon, Chalie Boy, Lil Keke, Mordecai, LexZyne Productions, Hefe Wine just to name a few.  My song “Greek Love” (video also shot by John Hale)  made it to a stepping documentary that aired on ESPN. Nation of Bruhz video (shot by Brandon Wiggins) was debuted in the biggest pawn shop in the world.  My latest project  I released is Welcome To Gatorville produced by Beanz N Kornbread featuring artists @_EJRAPS and @MiaStokesTha1. Definitely a timeless project,  something for my freedom fighters, green lighters, and Club one nighters.   I am currently still on the chitlin circuit and still writing and recording and mentoring as usual. Im leaning toward music placement/scores for commercials, tv, and movies.  If you’re the plug hit me up.  I also own a custom apparel company @PincGatorGear.