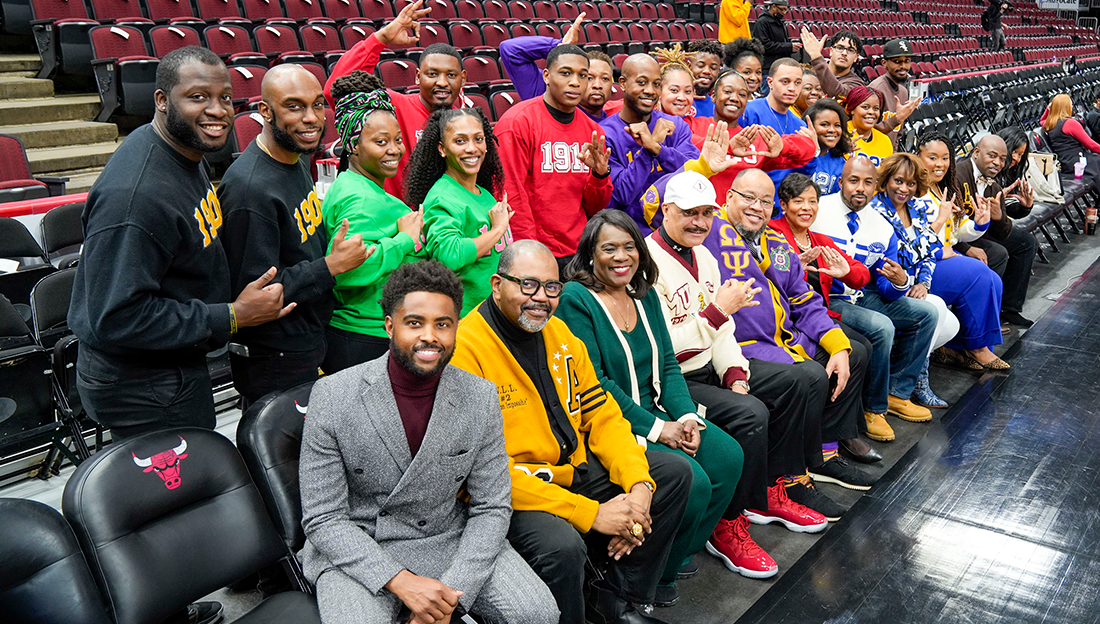 This season the Chicago Bulls centered their Black History Month efforts on honoring the Black community through a celebration of Black joy and paid homage to the National Pan-Hellenic Council (NPHC).

On February 7th, the Bulls celebrated Black History Month during their home game against the Phoenix Suns at the United Center. This special Black History Month game presented by Crown Royal celebrated and honored the rich heritage of Black excellence and achievements through performance and featured Black joy captured across Chicago.

“I know that getting 6 of the 9 NPHC Presidents, national and regional leaders from other organizations and the President of the National NPHC organization in one room on a Monday was lightning in a bottle,” Derrick L. Christian II, the Director of Marketing and Brand Innovation for the United Center and a Fall 2007 initiate of Kappa Alpha Psi told Watch The Yard.

“I’m extremely grateful for the collaboration with the Chicago Bulls that made it happen at the United Center. Chicago was uniquely qualified (in the sports industry, in NPHC presence and in personal connections) to make this happen and it serves as a template for how we can champion NPHC on any stage. I’m proud of the impact that we made that day and I’m more proud of the impact that we made in ways that I can’t even imagine and will never know.”

The Bulls sold special tickets to D9 members who came to the game and topped it off by giving the NPHC leadership in attendance their own custom Bulls jerseys with their names and respective organization’s founding years on the back.

“The Chicago Bulls have been doing an amazing job celebrating Black History Month with their focus on Black Joy and the Bulls Entertainment Network is the best in the industry,” Christian stated. “When they approached me again about involving NPHC in the halftime show that we originally collaborated on in 2020, I knew I wanted to take it to a historic level. I always imagined the presidents and national leaders of NPHC organizations highlighted at the game and I knew I was uniquely qualified to make this happen, in vision, in connection, and in activation this year. Not only did I want it to happen, but because everything aligned to show me that I had the absolute means to get it done at the United Center, then it would’ve been my fault if it didn’t happen. I couldn’t live with that.”

The event was a complete success and audience members and performers we spoke to loved the D9 representation featured throughout the game. We at Watch The Yard are excited to see what the Bulls come up with for next year to take this to the next level.