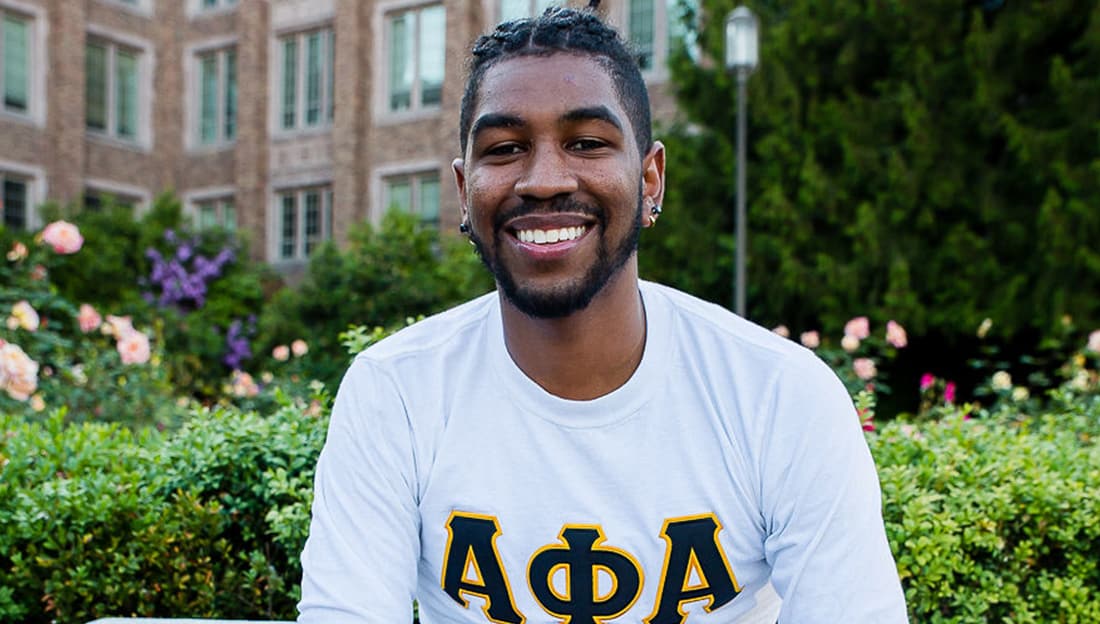 In an effort to highlight the young leaders who are leading undergraduate chapters across the nation, we at Watch The Yard reached out to the brothers of Alpha Phi Alpha Fraternity Inc.’s Alpha Xi Chapter at the University of Washington and did an interview with D’andre Garcia-Stubbs the president of the chapter.

The position of president of an undergraduate chapter of a Black fraternity is a highly respected role and there is a special pride that one takes. 21-year-old Garcia-Stubbs has used the position to gain new leadership experience, improve the lives of other students on campus and help the community around him.

We interviewed the education major and talked about his position, goals, future and what it means to hold a leadership on campus in the digital age.

Being a Chapter President means more than a title to add to my resume. It comes with a lot of responsibilities and privileges. Currently, I am the only Brother in my chapter. The responsibility as Chapter President becomes greater for me because I do not have undergraduate brothers to delegate tasks to. I am focused on spreading the name of Alpha on campus through various events/programs I host on campus. All while trying to grow my chapter. I also serve as NPHC Vice President for the University of Washington in addition to serving as Assistant District Director for the Great Northwest District. While serving as Chapter President I have learned that it is okay to ask for assistance or guidance and although I am a solo Brother on the yard I do not have to do it all alone because I have the support from my alumni chapters in the area. 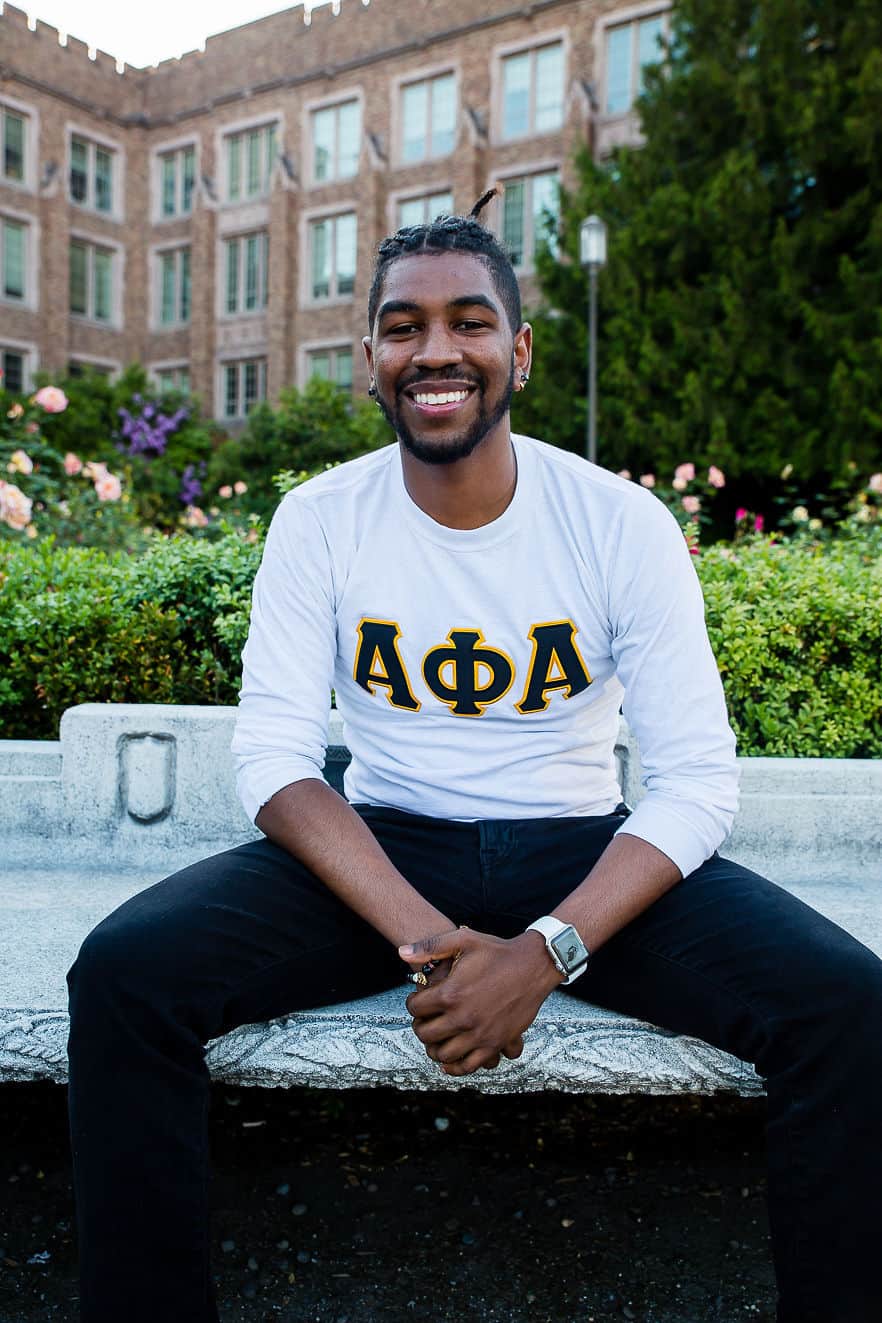 What made you decide to attend the University of Washington for undergrad?

When initially applying to attend universities I was unsure if higher education was right for me. Although I did not know what I wanted to study I have always been told growing up that education was the key. After receiving my acceptance letters it came down to two schools, one close to my hometown about 30 minutes away, and the University of Washington (UW). I at first did not want to attend the UW because of how large of an institute it was, but at the end of the day, I knew that the UW had many more resources and opportunities to offer me being a large research institution located in a major city. With the UW not only being a highly ranked university in the state but in the country, as well as the world, I did not want to pass up this opportunity to attend and I also knew if I did not like it, it would be much easier to transfer to a smaller school.

It has been a while since my chapter has hosted a Miss Black & Gold Pageant on my campus, so bringing that back to my campus is one of the larger initiatives my chapter is implementing this academic school year. This will improve the campus/surrounding community because it is a community event where our beautiful Queens can showcase their talents, passions, all while allowing my chapter to reward one special Queen with a scholarship who will then have the opportunity to compete at our Regional Convention. Bringing back the Miss Black & Gold Pageant also allows those not a part of Black Greekdom to participate and be a part of a great culture. Since Spring 18 the University of Washington went from having two NPHC organizations on campus to having 6 NPHC organizations on campus present day. Overall, this pageant will continue to bring awareness to both historically Black fraternities and sororities on campus.

Shortly after I accepted my admittance letter to attend the University of Washington, I received an email from the Brotherhood Initiative (BI) Program whose mission is to “empower undergraduate males of color to thrive on campus and graduate prepared for a lifetime of leadership, service, and success.”Coming from a town where I was about 1 of 3 Black students in my entire school and about 1 of 6 in the entire school district I did not grow up around a lot of Black role models. Therefore attending a Predominantly White Institute (PWI) I knew I needed to find a community of color so I applied to be a part of the Brotherhood Initiative Program. After crossing paths with the advisor for the BI at a stroll competition, I later found out that not only him, but the lead professor for the BI were both members of Alpha Phi Alpha Fraternity Inc. Moreover, NPHC organizations were just coming back to campus and at the moment we only had Phi Beta Sigma Fraternity and Alpha Kappa Alpha Sorority Inc. on the yard at the moment. However, after doing my research and connecting with members I knew Alpha was the right organization for me and decided to reactive the Alpha Xi Chapter of Alpha Phi Alpha Fraternity Incorporated! I crossed March 17, 2018, at 6:06 PM by way of the Alpha Xi Chapter seated at the University of Washington.

In today’s society, the digital world is one of the fastest and most efficient ways to provide information to the world. I believe undergraduate chapters need to remember to not only represent themselves in a positive light but, also their chapter and organization. Attending a PWI where the D9 has recently come back to the yard in addition to being in the western region, not many students are aware of historically Black Greek Life. The digital world allows chapters to showcase themselves on Instagram, Facebook, & Twitter, it also allows me personally to show students Black Greek Life across the nation. Chapters who represent themselves well in the digital world are able to show family members, school staff, and community members the things they have been up to. It is a great way to highlight individual members’ accomplishments whether it is an internship, scholarship, game statistics, or new officer positions for the upcoming academic year. 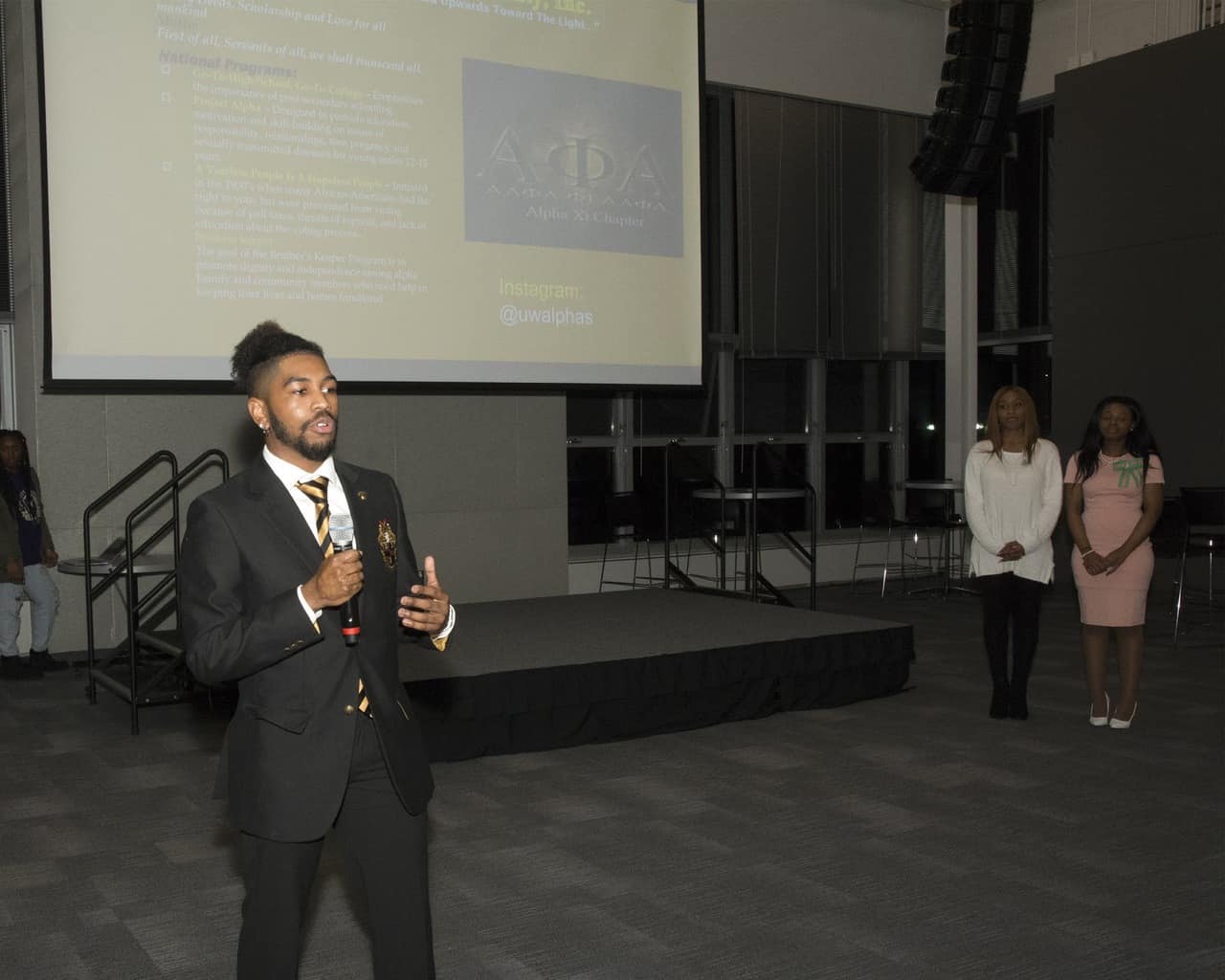 Leadership goes beyond the scope of authority and recognition. Leadership to me means developing individuals around me and helping others reach their full potential. It is not always about telling others what to do, but rather about standing alongside them leading the charge and not seeing those I am leading as any lesser than me. Leadership is about recognizing when to lead, but also when you need to be a follower. As a leader in whatever sector I am being a leader, my responsibility is to equip others with the necessary tools and strategies to not only move forward the success of that organization or group, but also the lives of the individuals I am leading.

Watch the Yard is important to Black greekdom because it offers a platform to showcase the Divine 9 in a positive light. Whether that is highlighting individual members, chapters, or NPHC as a council at specific institutions across the world. From stepping/strolling, to greek unity photos, and community events/programs both on and off-campus. Watch the Yard provides a positive platform to show the today’s society the various great things that are taking place across the world. Moreover, they do not only showcase Black greek life present, but it archives its past while shedding light on its future. 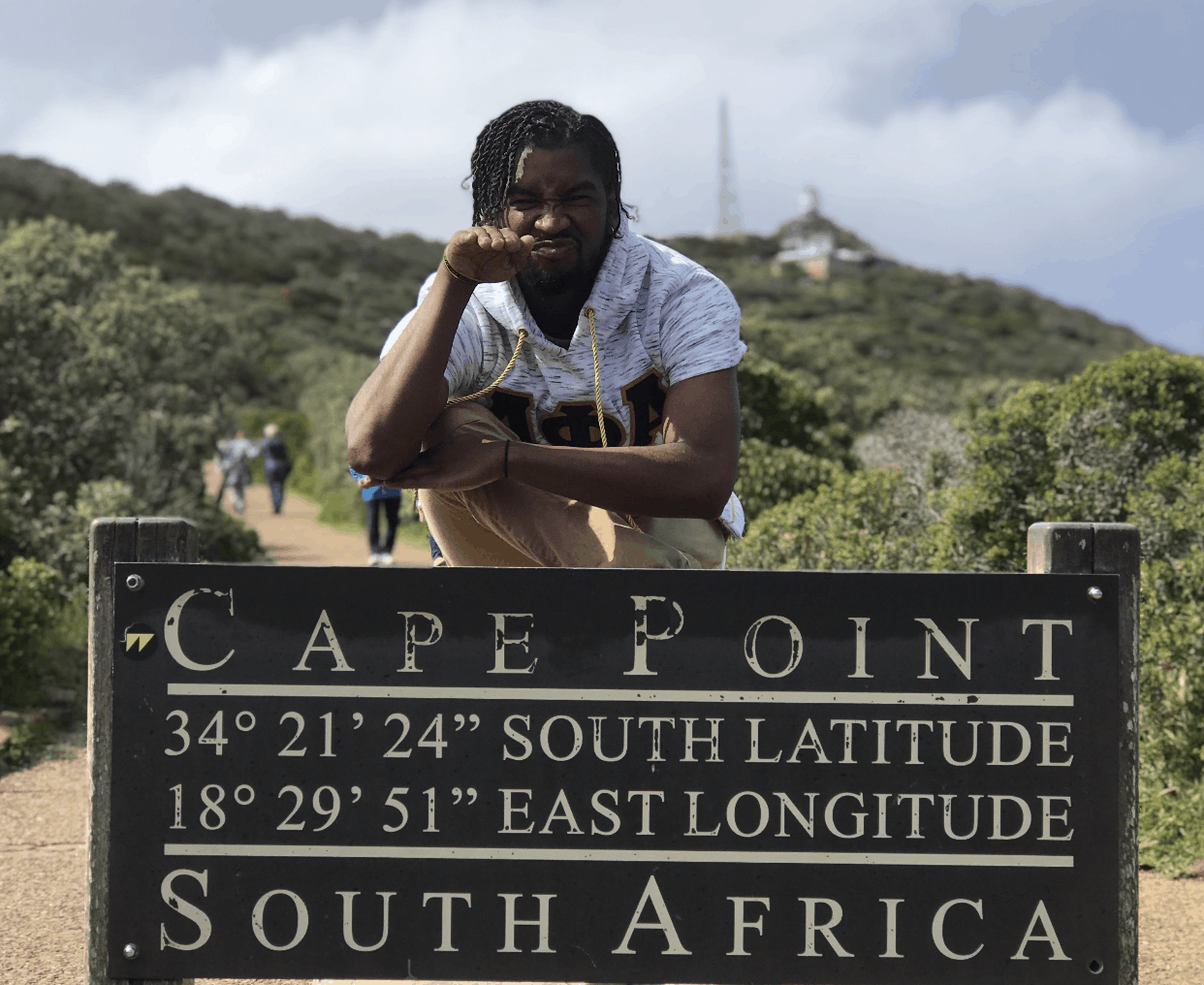 Since crossing the burning sands in Spring 18 I have learned a lot about what brotherhood is and what it means to me. Brotherhood to me means having each other back through the good in the bad. It means having someone I can call no matter the time of day, to lean on during times of tribulation, as well as, time of rejoicing. Brotherhood also means to hold one another accountable for our actions and ensuring we are taking positive steps to become the best version of ourselves. No words can truly encapsulate what brotherhood means to me nor how Alpha Phi Alpha Fraternity Inc. has provided a brotherhood to me.

I am currently an Education, Communities, and Organization (ECO) major. This major emphasized the concept that learning happens across settings outside of your typical classroom. I was drawn to this major because it will help me develop a strong foundation on equity, human development, learning theory, and community-based research and organizational dynamics. My post-baccalaureate plans are to attend graduate school and get a masters in higher education and/or leadership. I desire to pursue a master’s degree because I am passionate about working in higher education such as in the role of an advisor or professor. I am interested in partaking in research that focuses on addressing disparities faced by underrepresented minority students. I would like to continue to develop the skills and gain the knowledge necessary to address issues such as educational diversity and inequity. I have had strong mentorships from people of color and specifically men of color at the UW, which has fueled my drive to one day be that person for another student. Nelson Mandela once said, “Education is the most powerful weapon which you can be used to change the world.” I hope that by showing interest in the students I work with I can motivate and support students of color to pursue their dreams and ambitions. Repeatedly, I have been told by educators, peers, and community members that I would not make it. However, today I am in a position to be a voice for those who will and have experienced what I did. That in itself lights a fire beneath me to keep growing, learning, and striving to be boundless.

We at Watch The Yard would like to commend D’andre Garcia-Stubbs for his work as the president of Alpha Xi Chapter which has a long legacy that spans back to 1939.