You already know we love throwback RnB and we also love proposal videos! So when we came across this video of a young brother proposing to his future wife by remaking Guy’s 1990 RnB hit “Let’s Chill” we were ecstatic.

For the proposal, Trevon Davis teamed up with his Kappa Alpha Psi line brothers Montra Scott, Rayvon Washington, Tolan Jackson and Nightfall Motion Pictures to surprise his bride-to-be with a video that will blow you away.

Treyvon and his line brothers are Spring 2013 initiates of the Zeta Psi Chapter of Kappa Alpha Psi Fraternity, Inc. at Lamar University.

Both the bride-to-be, Franchelle Hill, and Trevon were born and raised in Houston and are graduates of Lamar University in Beaumont, Texas who met in 6th grade at Cobb Elementary School. 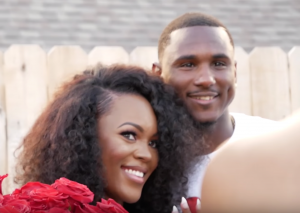 She is a head track coach for Stafford High School and English teacher and he is a probation officer for Harris County Juvenile Probation Department.

“I grew up listening to old school music and I knew that let’s chill by guy symbolized somebody ready to settle down and spend the rest of their life with someone!” Trevon told Watch The Yard in an interview.

“It took about one month to shoot the video. I had to make it perfect for her. Every detail counted. I would imagine her reaction to something and that would encourage me to give more thought to this project!”

“My initial reaction was just absolute shock and humor because I honestly could not believe that it was done, but once the day was over and I got to rewatch the video I was overcome with emotions. He really put a lot of time and energy to make this project and just validated how lucky of a woman I am to have a man that loves and cares so much about little details,” Franchelle told Watch The Yard.

When we asked about Trevon’s line brothers who took part in the video, he said that as soon as he asked them to help out they were on-board with it,

“We’ve been tight since before we crossed and when I asked them to do it, they all laughed thinking I’m over the top!” he said. “But they would pretty much do anything for me so their next question was, ‘When we shooting Nupe?’ They even took the time to learn the song and I appreciate my brothers for helping me put all this together!”

Watch the original video by Guy below!

You did a good job Tre. Set that bar high for these other fellas out here young brother!