American civil rights attorney, the first woman to be appointed to the United States Commission on Civil Rights, and the 14th National President of Delta Sigma Theta Sorority, Inc,. Frankie Muse Freeman, Esquire passed away at 101-years-old yesterday on the eve of her sorority’s 105th anniversary.

The statement about Freeman’s passing, was posted publicly on the sorority’s national website. 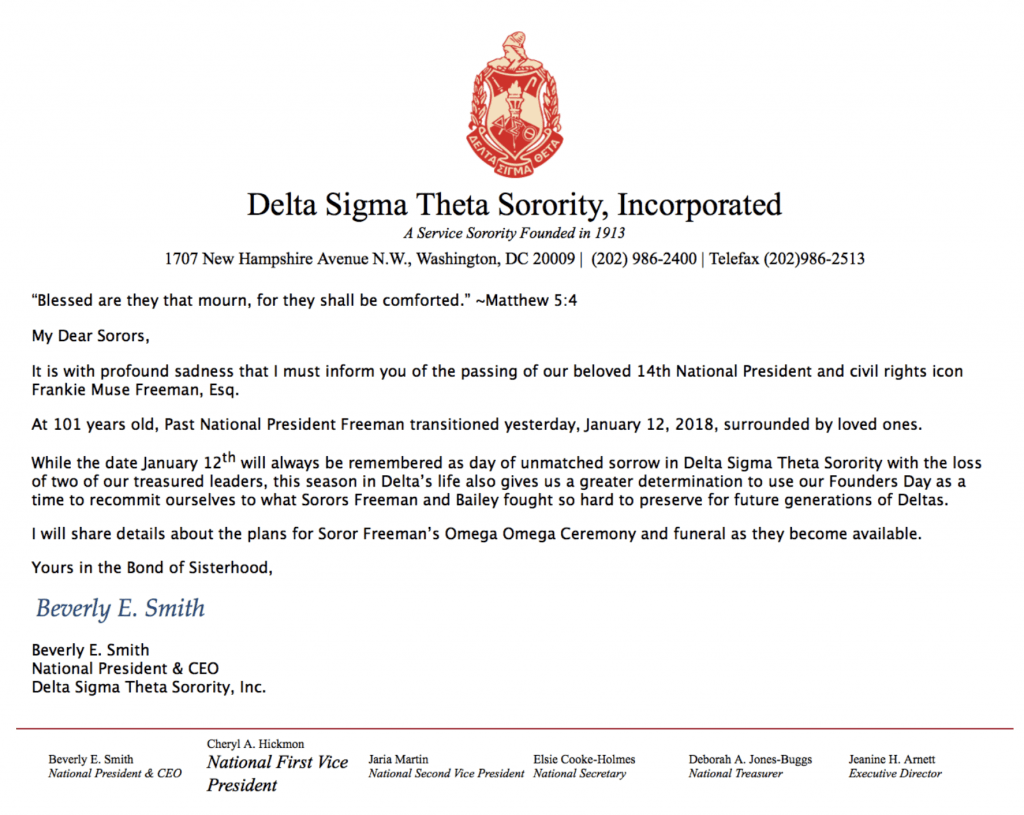 The sorority also released a statement stating that their 17th National President, Mona Humphries Bailey who passed away the same day. Out of respect for the individual achievements and lives of both women, we at Watch The Yard have made the decision to write two seperate articles. For the article about Mona Humphries Bailey click here.

Freeman, who was born just 4 years after the sorority was founded was a famous civil rights icon.

In 1954, she made history by winning the “Davis et. al. v. the St. Louis Housing Authority,” case that ended the legal racial discrimination in St. Louis public housing.

She was also very involved with the United Way, serving as a board member, and was part of the leadership of the Girl Scouts.

Take a look at this interview that the St. Louis Alumni Chapter of Delta Sigma Theta Sorority, Inc. did with her about her life and amazing legacy.

After hearing of her passing, as well as the other announcement of the passing of the sorority’s 17th national president the same day, droves of people in the Black fraternity and sorority community to to social media to reach out and express their condolences and honor her life.

Here are a few of their posts:

It is with great sadness that we share the passing of our 14th National President Frankie Muse Freeman. She was a formidable woman who championed the rights of our community. Our thoughts and prayers are with her family and the sisters of Delta Sigma Theta Sorority, Inc. pic.twitter.com/egXUP0nWv3

Honoring two Delta Sigma Theta giants who have fallen, but are not forgetten: 14th National President, Attorney Frankie Muse Freeman and 17th National President, Mona Humphries Bailey. Their contributions to the American fabric are noteworthy with impact that is far reaching. pic.twitter.com/u4tsUPzfZw

Well done, good and faithful servant. We thank you for your life of service. May we carry the torch high and light the path for others to follow. pic.twitter.com/wkTs4nucDh

We ask that you keep Freeman’s family, friends and sorority sisters in your thoughts. We also ask that you leave your condolences and memories of her so that her family can see how much she meant to all of us.