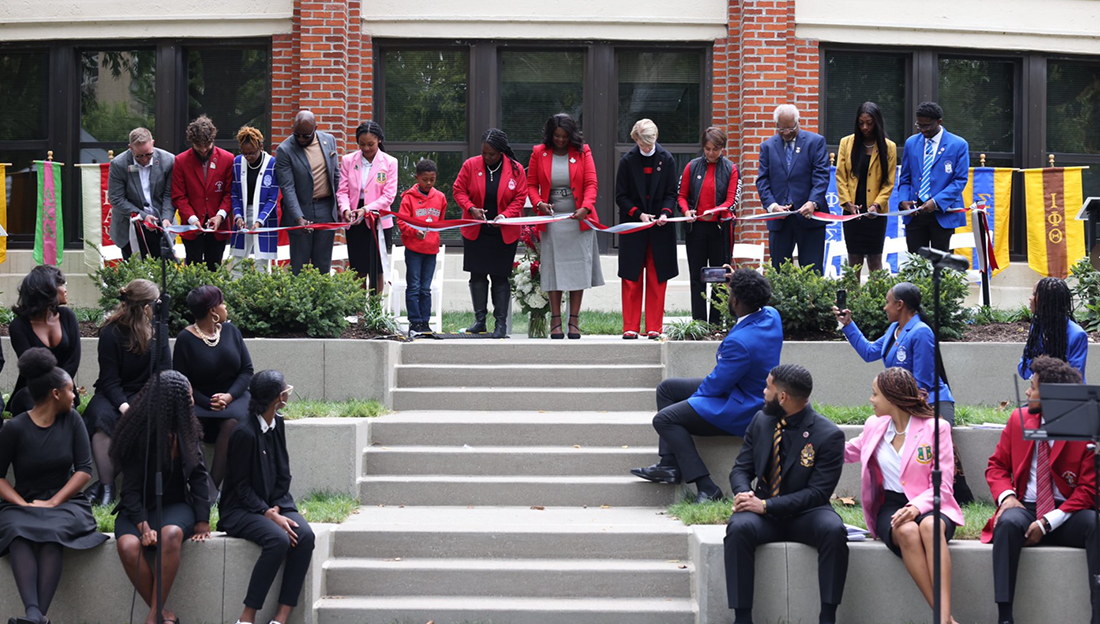 The NPHC Plaza was dedicated on October 1st and is located on the South Oval of Ohio State’s Columbus campus near the historic Frank W. Hale Jr. Black Cultural Center, 154 W. 12th Ave.

“The NPHC Plaza is a central space for Black students to explore their sense of self and community and serves as a physical display of Ohio State’s commitment to every Buckeye while honoring Black history, heritage and tradition,” Ohio State News quotes Melissa Shivers, Ohio State’s senior vice president for student life and a member of Alpha Kappa Alpha Sorority Inc, stating.

“These organizations served as a community builder – in particular, for students of color,” she followed. “Over the years, institutions have said, ‘We want to make sure that there is representation of the organizations that have made such a difference,’ not just here at Ohio State, but nationally and internationally, through our service to scholarship, sisterhood and brotherhood – that’s who we are.”

“Today we are dedicating a plaza to those nine historically Black Greek-letter organizations so that students who are currently here, the alumni who are working toward having this cemented history at Ohio State, and then to think about the students of the future,” Melissa Shivers stated. “When they come to tour Ohio State and they walk by and they say, ‘What is that? What does that even mean?’ we have an incredible story to tell. And my hope is that this plaza represents a sense of belonging that didn’t always exist at institutions of higher education.”

Ohio State University’s President Kristina M. Johnson, who was in attendance, took to Twitter to share the event.

Check out the coverage that Ohio State News did of the dedication event:

We at Watch The Yard would like to congratulate the students, alumni and administrators who came together to make this plaza happen. It is hard work to plan and execute building a monument for Black students on campuses of predominantly white universities but this community was able to make it happen. Hopefully other large universities will see the work that Ohio State University has done and follow in their footsteps to build more spaces recognizing the past, present and future of Black communities on their campuses.