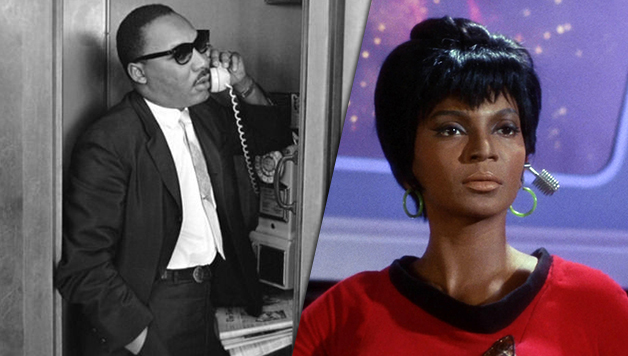 Did you know that Martin Luther King Jr. was a big Star Trek fan and that in the 1960s he personally convinced Nichelle Nichols, the African-American actress who played Lieutenant Uhura to not leave the show because of what her role meant to Black Americans.

Nichols played Uhura on the original Star Trek and was revolutionary because she portrayed the first black female character who wasn’t a stereotype on television. After finishing the first season of the show, she was getting so many offers from the theater world that she decided to quit the show because she wanted to follow her dream of being a famous Broadway singer. She went to the series’ creator, Gene Roddenberry, on Friday and gave him her resignation letter he took it but told her to think about it and not make her final decision until the next Monday.

“On Saturday night, I went to an NAACP fundraiser, I believe it was, in Beverly Hills,” Nichols told NPR in 2011. “And one of the promoters came over to me and said, Ms. Nichols, there’s someone who would like to meet you. He says he is your greatest fan.

And I’m thinking a Trekker, you know. And I turn, and before I could get up, I looked across the way and there was the face of Dr. Martin Luther King smiling at me and walking toward me. And he started laughing. By the time he reached me, he said, yes, Ms. Nichols, I am your greatest fan. I am that Trekkie.”

Dr. King then changed her whole perspective on quitting:

“‘Nichelle, whether you like it or not, you have become a symbol,” she said he told her during a Reddit Ask Me Anything interview earlier this year. “If you leave, they can replace you with a blonde haired white girl, and it will be like you were never there. What you’ve accomplished, for all of us, will only be real if you stay.’ That got me thinking about how it would look for fans of color around the country if they saw me leave. I saw that this was bigger than just me.”

Nichols went back to Gene Roddenberry on Monday and told him she wanted to stay and the rest is history. And that is the story of how Alpha Phi Alpha’s Martin Luther King Jr. saved the first fictional black character in outer space.

Share with a Star Trek fan and make their day!