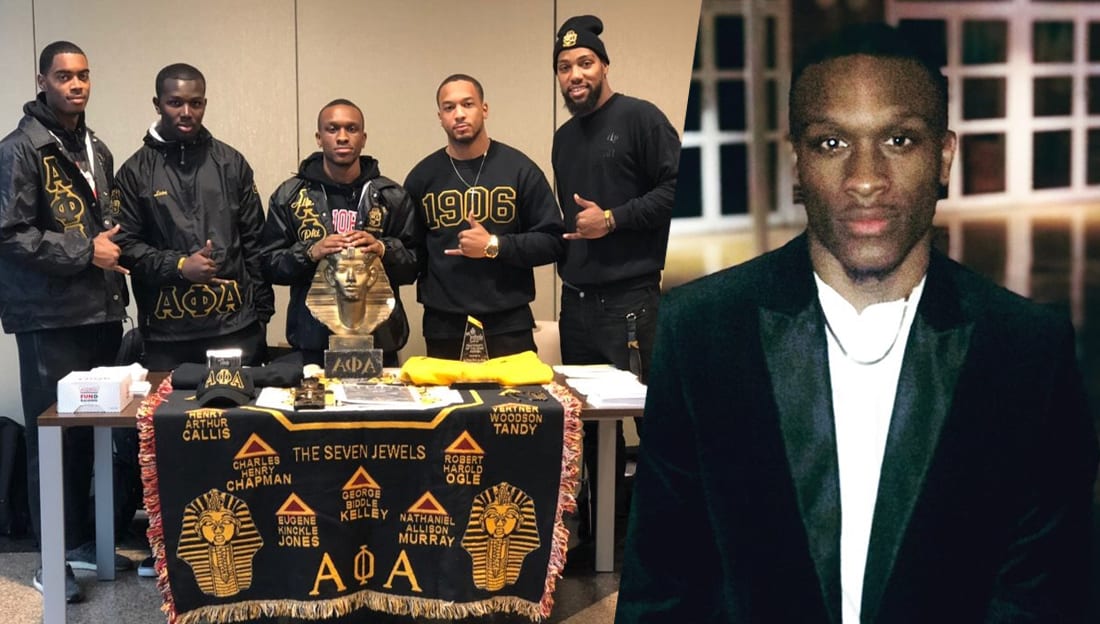 In an effort to highlight the young leaders who are leading undergraduate chapters across the nation, we at Watch The Yard reached out to the brothers of Alpha Phi Alpha Fraternity Inc.’s Theta Epsilon Chapter at St. John’s University and did an interview with Todd Davison the president of the chapter.

The position of president of an undergraduate chapter of a Black fraternity is a highly respected role and there is a special pride that one takes. 21-year-old Todd Davison has used the position to gain new leadership experience, improve the lives of other students on campus and help the community around him.

We interviewed the Psychology major and talked about his position, goals, future and what it means to hold a leadership position on campus in the digital age.

What does it mean to be a chapter president to you?
Being the president of the Theta Epsilon Chapter of Alpha Phi Alpha Fraternity, Inc. is a tremendous honor. It’s not an easy task being president and there are many times where it seems the work and responsibility will never get easier, but my chapter and my prophytes have made such a strong system of support for me that being president is well worth it. Through this role I’ve learned a lot about myself in terms of conducting business, working with others, and making the tough decisions. I’ve been able to connect with Alphas from all over and visit states and places that I never thought I’d find myself in.

What made you decide to attend St. John’s University for undergrad?
I had attended one of the best high schools in the country while in Massachusetts. Boston College High School is very similar to St. John’s University in terms of its ties to Catholicism. Even though I am not Catholic, many of their ideals align with what I believe as a Christian. I decided to attend St. John’s University due to its diversity. Since the school is located in Queens, NY, the most diverse place in the entire world, you get to appreciate and experience many different cultures. The campus, much like the burrough is a microcosm of how the world is in reality: filled with many different people with many different perspectives of life. In learning about other people and their cultures, I have learned about my place in the world and what I can do to make others understand my culture as an African American man, and i love that. No two people are the same, so everything that I learn, only enhances me and everything that I teach only enhances others. I will admit that a big reason as to why I decided to travel from Brockton, Massachusetts to New York for school was because of the lights and glamour that New York has depicted through movies and television, but the to watch New York on television and to live in New York are two very different experiences.

What specific initiatives is your chapter heading up this year and how do you think they will improve the campus/surrounding community?
With our Alpha Week having taken place on campus December 3rd-7th, my chapter made sure to use our platform to push forth programs dedicated to mental health. To start of our week, we had an open discussion with the campus in an event called Keep Ya Head Up where we spoke about a variety of mental illnesses and the resources that our campus offers as well as facilities outside of campus that will help. We had another program that connects music to your mental state and how it can affect your thinking, actions and emotions. For the spring semester, in 2019 we have teamed up with New York City Department of Health and Mental Hygiene’s Sisters and Brothers Thrive initiative and a few other organizations on campus to host a Mental Health First Aide Training Day on campus. It is a school-supported event in which people will gain more formal training on mental health and encourage them to seek help or be the help for people going through difficulty. Mental health and awareness in our communities- more importantly, the black community needs to constantly discussed and we’ve noticed how much opportunity there is to make a generation of leaders that are aware of this and utilize it to the best of their abilities. In order to progress we must face issues that plague our neighborhoods and families first and foremost.

What made you want to pledge Alpha Phi Alpha?
Growing up, I had known of the Greek organizations and how much importance they held in the black community. For me, there were so many historical figures that I looked up and that I emulated were all Alpha men. I didn’t know until doing my research that men such as Rev. Dr. Martin Luther King, Jr., Jesse Owens,W.E.B Du Bois, Thurgood Marshall, and Frederick Douglass were members. These are men that have changed the course of history- that have made their mark on the world, but simply were doing what they did for the love of all mankind. I want to be written into history books as a game changer and as someone who did more for others than for himself. There are many men who are great, who have been written in the history books as people that have done good- not all great men are Alphas, but ALL Alphas are great men. 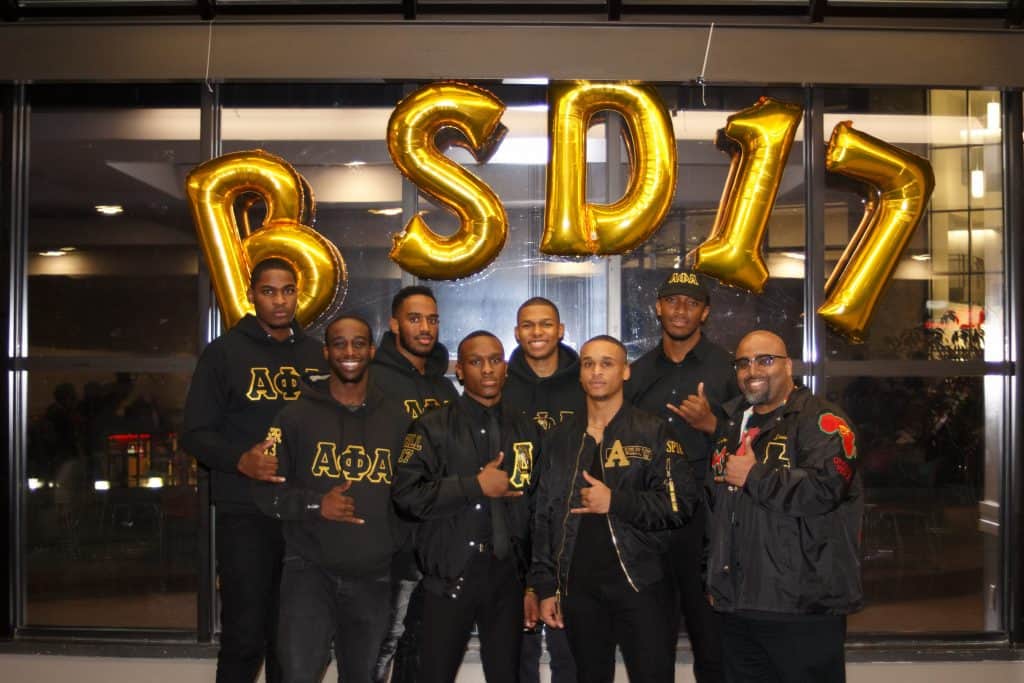 What is it about your specific chapter that makes it so unique?
The Theta Epsilon Chapter was founded on Friday May 5th, 1972 on the campus of Adelphi University in Garden City, NY and was later recharted on the campus of St. John’s University in Queens, NY on Friday November 5th, 1999 where it is still seated today. The Theta Epsilon Chapter is the Queens Metropolitan chapter and we encompass Queens College and York College in addition to St. John’s University. My chapter, also known as the Mother Chapter, is the first chapter of our fraternity to be founded on Long Island so my chapter has set an example and continues a standard for how our beloved fraternity aims to impact the community. 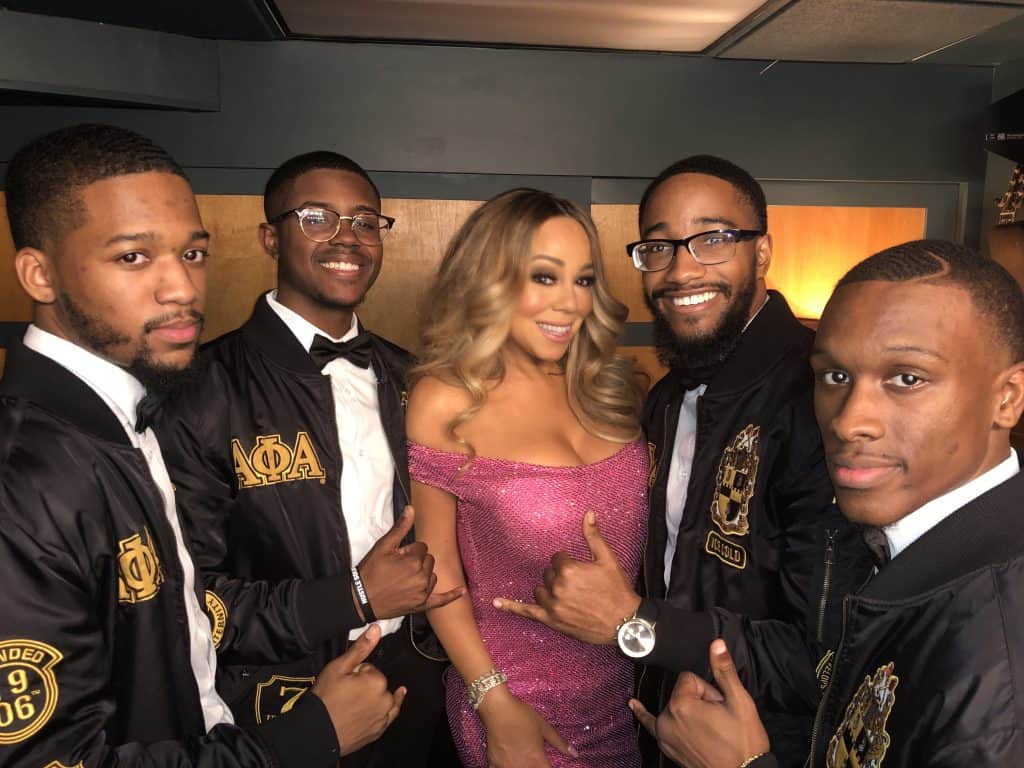 We now live in a digital world, what do you think undergraduate chapters across all orgs need to do to represent themselves online in 2019?
Utilizing every bit of social media and the features of each social media platform. Since people consume so much information in a day and at such a fast rate, Instagram is one of biggest resources we’ve utilized. When it comes to promoting events or getting school community involvement through asking questions on the Instagram story and walking up to people and engaging in actual conversation, you tend to receive a lot of feedback and interaction. You can make even the most serious of topics fun and interactive where people can still learn.

What does leadership mean to you?
Leadership to me means, being able to be wrong many times and yet still having people willing to follow you because they trust you. There hasn’t been one leader throughout history that has succeed in everything that they’ve done. The common thread with them all is that people believed in them and that kept them going. Being a leader also means you have the courage to move forward when others don’t necessarily want to continue on. As one of my favorite poems says, “The test of a man is the fight that he makes, the grit that he daily shows; The way he stands upon his feet and takes life’s numerous bumps and blows.” The character of a leader is determined and defined by the way they rebound daily just as much as the success they have. Lastly, my favorite quality about a leader is their humility. Being humble, learning when to let someone else shine and take over is one of the greatest assets a leader can have. For the sake of the group, a leader must always remain humble, but confident in themselves. 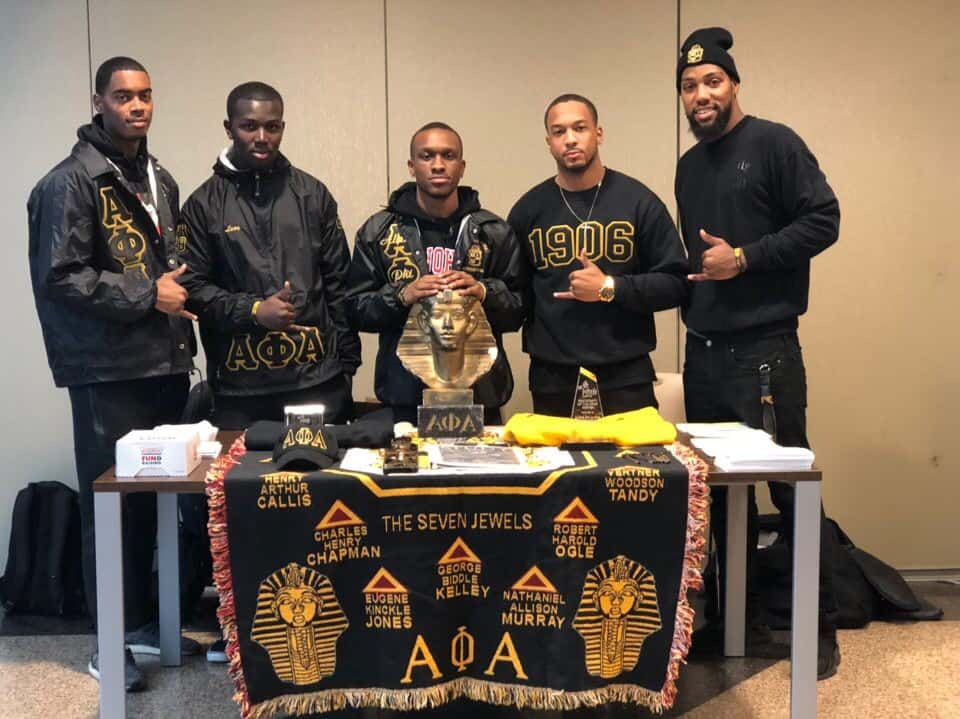 Why do you think Watch The Yard is important to Black greekdom?
Watch The Yard is extremely important because not only does it highlight the history and the most notable members of each organization, but it also highlights the incredible achievements of people all over the country and it gives those who are not members a look into Black greekdom. I’ve personally learned a lot from Watch The Yard in terms of what I want in an organization. People may have been raised in a family that is predominately one organization so their view can be influenced by that, but when it comes to Watch The Yard all organizations are given their equal time to shine. It is the place you want to go to get information that is equally objective and subjective.

What does brotherhood mean to you?
Brotherhood means to me an endless amount of support from and for others. When one person is down, the entire brotherhood comes to their rescue. It’s something that you sign up for not looking to receive anything from others but to give and help others. As Black men in this world, it is very hard to open up to one another and be vulnerable around each other. There’s always a sense of putting on a facade or wall of protection in front of men you don’t know. When you join a brotherhood, that wall of protection no longer exists, and if it stays it makes it so much harder to enjoy the brotherhood. One person can’t help another person unless they know who that person is, but once you open up, you start to see how beautiful each individual is. 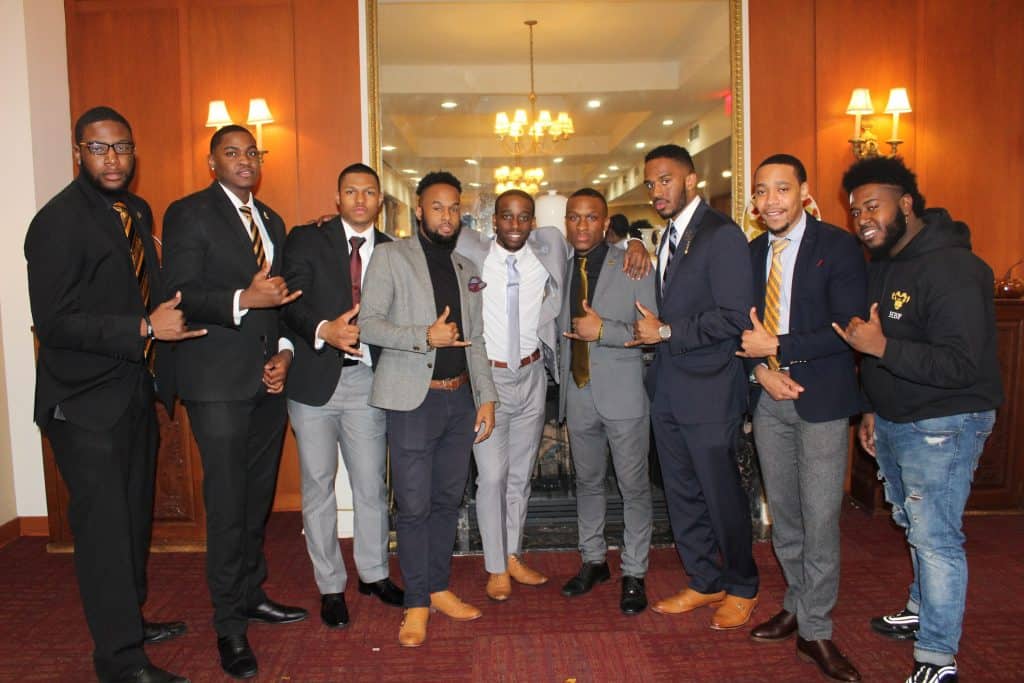 What do you plan on doing after graduation?
I plan to work with children. My ultimate goal is to become a child psychologist for Black children in our communities, but in working towards my doctorate degree, I would like to be a teacher and earn my masters degree in psychology. The lack of representation in the psychology field for Black people, and the issue of mental health has become motivation for me to achieve this goal. As someone who battles depression and anxiety on a daily basis, I want to make sure I do what I can for children to not have to feel what I’ve felt or learn of ways to cope and beat depression and anxiety every day. By the grace of God, I will not fail! 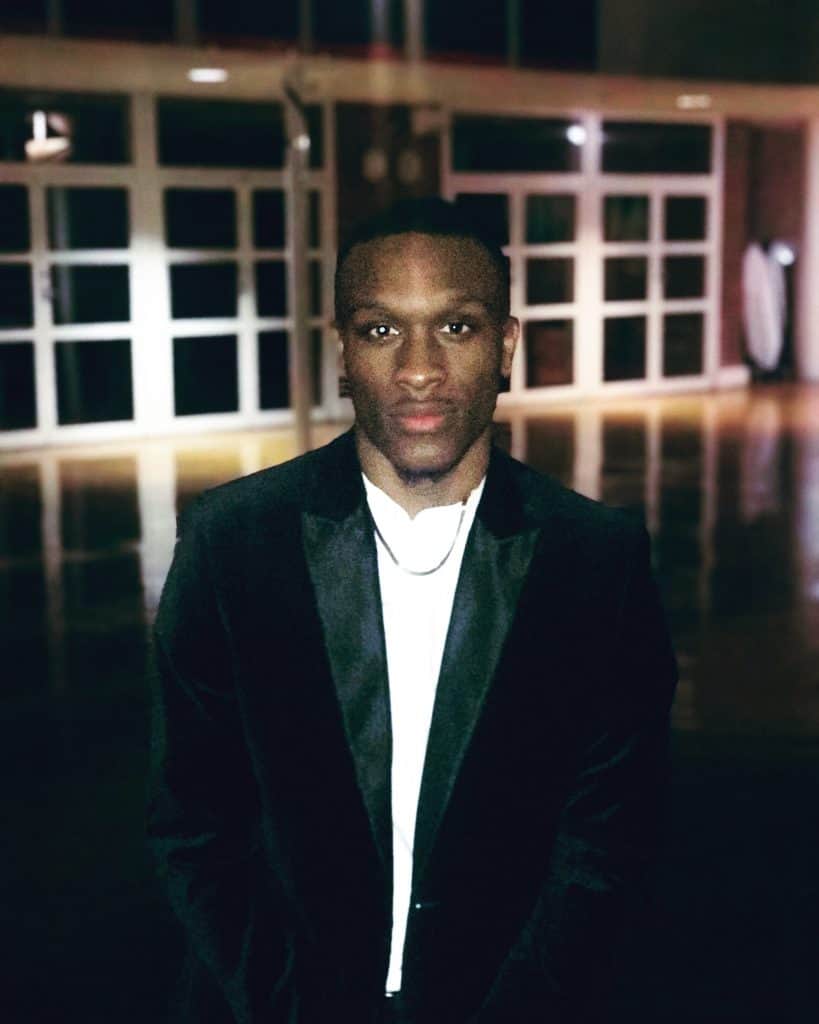 We at Watch The Yard would like to commend Todd Davison for his work as the president of Theta Epsilon Chapter which has a long legacy that spans back to 1972.