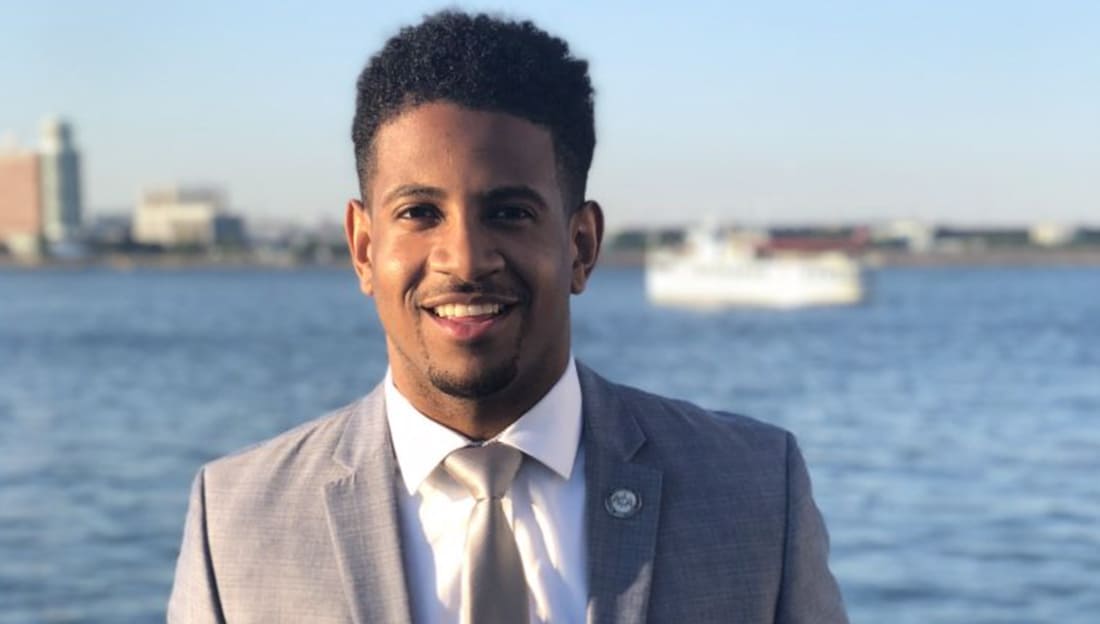 In an effort to highlight the young leaders who are leading undergraduate chapters across the nation, we at Watch The Yard reached out to the brothers of Alpha Phi Alpha Fraternity Inc.’s Epsilon Chapter at the University of Michigan and did an interview with D’Andre Simpson the president of the chapter.

The position of president of an undergraduate chapter of a Black fraternity is a highly respected role and there is a special pride that one takes. 21-year-old D’Andre Simpson has used the position to gain new leadership experience, improve the lives of other students on campus and help the community around him.

We interviewed the Organizational Studies major, Business minor and talked about his position, goals, future and what it means to hold a leadership position on campus in the digital age.

What does it mean to be a chapter president to you?
I have had the opportunity to lead and guide my chapter as a two time President in the 2017-2018 and 2018-2019 academic school years as both a neophyte and a prophyte. Being the President of such a prestigious chapter at an elite university has had its challenges, however I have learned so much from the position because of the men around me and will never regret serving my terms. Throughout my Presidency, I have learned that being a Chapter President means one must have the ability to wear numerous hats and play various roles within the chapter. As the leader of my chapter, I am a confidant to my brothers, an enforcer of rules, a decision-maker, and a representing voice for the entire chapter. 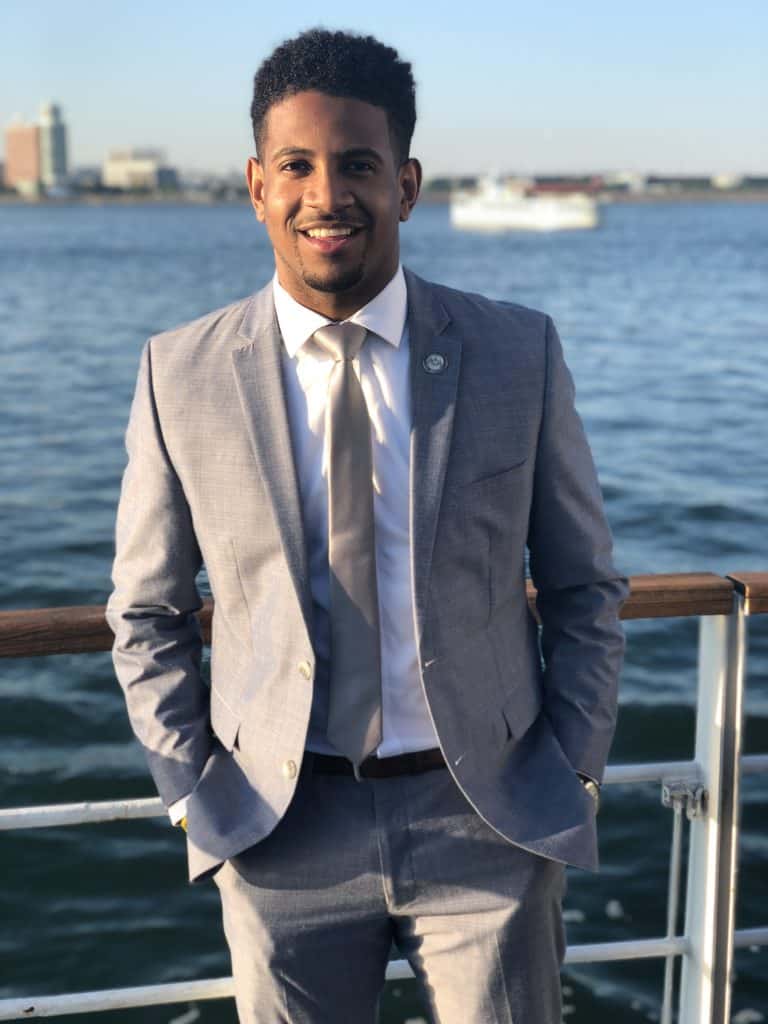 What made you decide to attend the University of Michigan for undergrad?
The University of Michigan is one of the top public universities in the country and possesses the world’s leaders and best. I believe it is essential that I surround myself with people on the same mission as me as I strive to be a reinvigorating force within my community by being the change I want to see. The students at U of M are also motivated individuals who want to be change makers within their respective communities. Being surrounded by these type of individuals will allow me to learn and collaborate with them in order to achieve my goals of impacting the world.

What specific initiatives is your chapter heading up this year and how do you think they will improve the campus/surrounding community?
My chapter, the Epsilon Chapter is spearheading numerous initiatives in this upcoming year, which include a plethora of campus wide programming, national programming, and community service outreach across the state of Michigan. Some of the staple programs coming up in the next year are our Tribute to Dr. Martin Luther King, Women’s Appreciation Weekend, which include our Salute to African American Women, Women’s Spa Day, and Train Like An Alpha Competition. Our key programs for the Fall 2019 semester include our Diag Charity Stroll Off, Miss Black & Gold Scholarship Pageant, and the Annual Epsilon Chapter Founder’s Day Step Show Presentation.
Our chapter programs are essential to the community as they provide cultural awareness to the various communities at the University of Michigan, as well as serve as platforms to highlight and showcase the African American students on Michigan’s campus. Furthermore, our community service events allow Epsilon brothers to act as mentors to young black men in high schools across Michigan, participate in different Food banks to package food for underprivileged families, as well as raise money for various projects such as the Flint Water Drive. As the leader of my chapter, I push my brothers to continuously remain servants of all.

What made you want to pledge Alpha Phi Alpha?
I believe there were numerous factors that led to my decision of pledging Alpha Phi Alpha at Michigan. In high school, I was in the Detroit Alpha Esquire Mentorship Program under the Gamma Lambda Chapter of Alpha Phi Alpha. Being around these intelligent and motivated brothers at Gamma Lambda prompted my interests in the brotherhood of Alpha Phi Alpha. Throughout high school, I took notice of how these men conducted themselves within the community, the way they treated each other and women with the utmost respect, and lastly how they immersed themselves in the community to act as servants for all. I knew once I entered college, I wanted to be a part of something bigger than myself and join an everlasting brotherhood that acted as leaders for the individuals around them. I am thankful that my mother who is a SPR ‘89 initiate of Alpha Kappa Alpha Sorority Incorporated placed me into the program, which allowed me to gain early exposure on what Alpha Phi Alpha stood for. 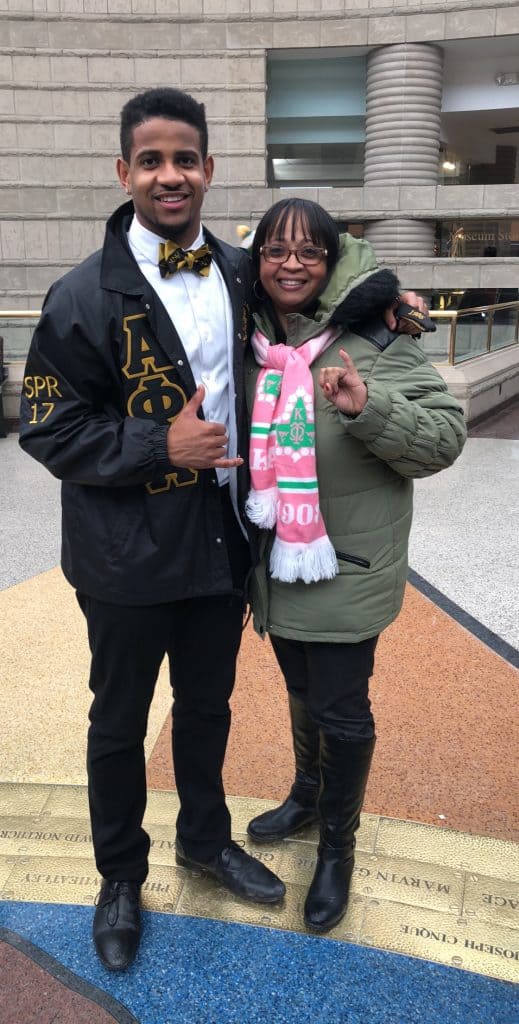 What is it about your specific chapter that makes it so unique?
The Epsilon Chapter is unique in so many ways in which I greatly appreciate. Since its inception in 1909, the chapter has had a long rich history on both a local and national level across the country. Epsilon serves as the oldest black organization on the University of Michigan’s Campus and the Mother of the Midwest for Alpha Phi Alpha as well as other Greek organizations considering the fact that the chapter was the first black Greek organization founded in the Midwestern Region. Furthermore, during Epsilon’s earliest years, Epsilon brothers helped charter other Alpha Phi Alpha chapters in the state and region. The chapter also has prominent members such as W.E.B Dubois, Civil Rights activist, Willis Ward, first black All American football player and player at Michigan, and Brett J. Hart, current Executive Vice President of United Airlines. These are just a few of the prominent members that Epsilon has and the chapter continues to cross leaders as current chapters brothers hold more than 20 leadership positions on Michigan’s campus. The chapter will be celebrating its long rich chapter history on April 10th, 2019, marking its 110th year anniversary.

We now live in a digital world, what do you think undergraduate chapters across all orgs need to do to represent themselves online in 2019?
Considering the fact that social media plays a major role in this generation, undergraduate chapters need to utilize platforms such as Instagram and Twitter to highlight their chapter programming, community service initiatives, chapter member highlights, and history of their chapters. Greek organizations across the country are able to take note and recognize the works of other organizations because of their intentional use of social media. Lastly, organizations are able to build a public brand/image for their chapter by using these platforms, which has an extensive reach.

What does leadership mean to you?
Everyday I reiterate, “To whom much is given, much is expected.” This is my mantra and as a leader in both my fraternity and community, it reminds me that I must meet and exceed the expectations placed upon me by the individuals I am leading. Leadership has so many meanings, however I believe it is the ability that one has to influence the people around them to obtain common goals and make impactful changes in the community. As the President of Epsilon, the Vice Speaker of the University of Michigan’s Central Student Government, and Vice President of the Black Business Undergraduate Society, I have individuals depending on me to make the best decisions and lead the organizations to success. Although I possess these leadership positions, I constantly remind myself that I do not need a leadership title in order to be a changing force within my community. 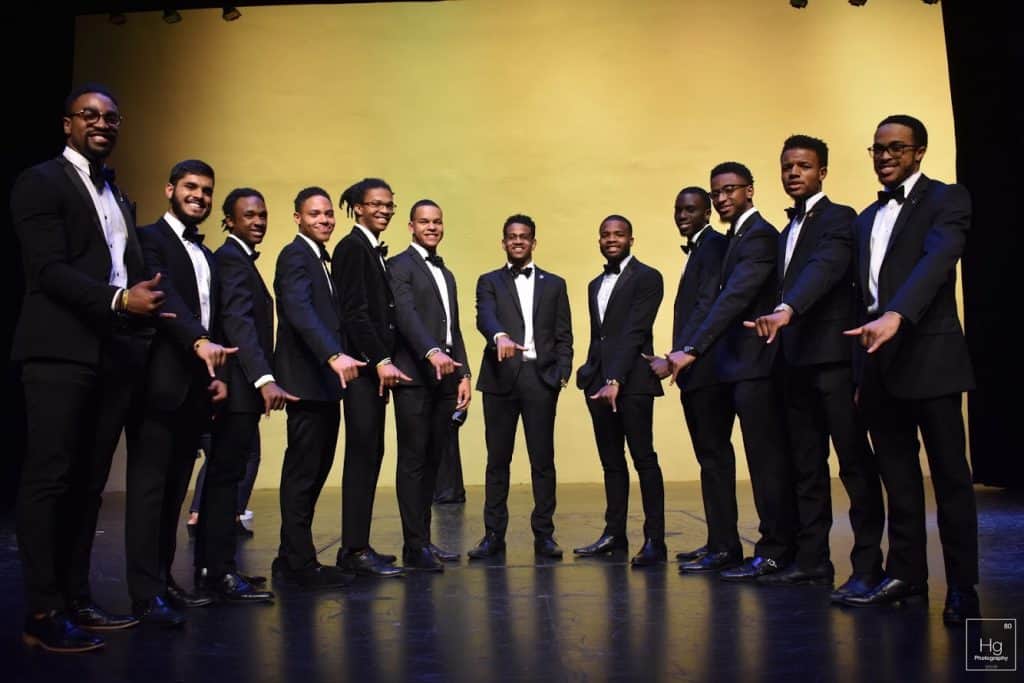 Why do you think Watch The Yard is important to Black greekdom?
Watch The Yard is an integral platform for Black greekdom because it highlights and showcases the long rich history that Black greekdom possesses. Whether we realize it or not- Black greekdom is entrenched in African American history, especially in the rise of our black people in a country that was not originally built for us. Without platforms like Watch the Yard, Black Greek culture and its history might be dismissed. Furthermore, the exceptional work that D9 organizations do across the world will not be showcased, nor recognized if it were not for Watch the Yard.

What does brotherhood mean to you?
Brotherhood is a distinct, intangible, and private bond that exists amongst the brothers in my chapter and my fraternity on a national level. Since pledging Epsilon, I have gained brothers who I can depend on for anything whether it is advice, emotional/financial support, a good laugh, a prayer, or a chapter task. I know some of these men will be the uncles of my future children, the best men in my wedding, and will forever be my brothers. 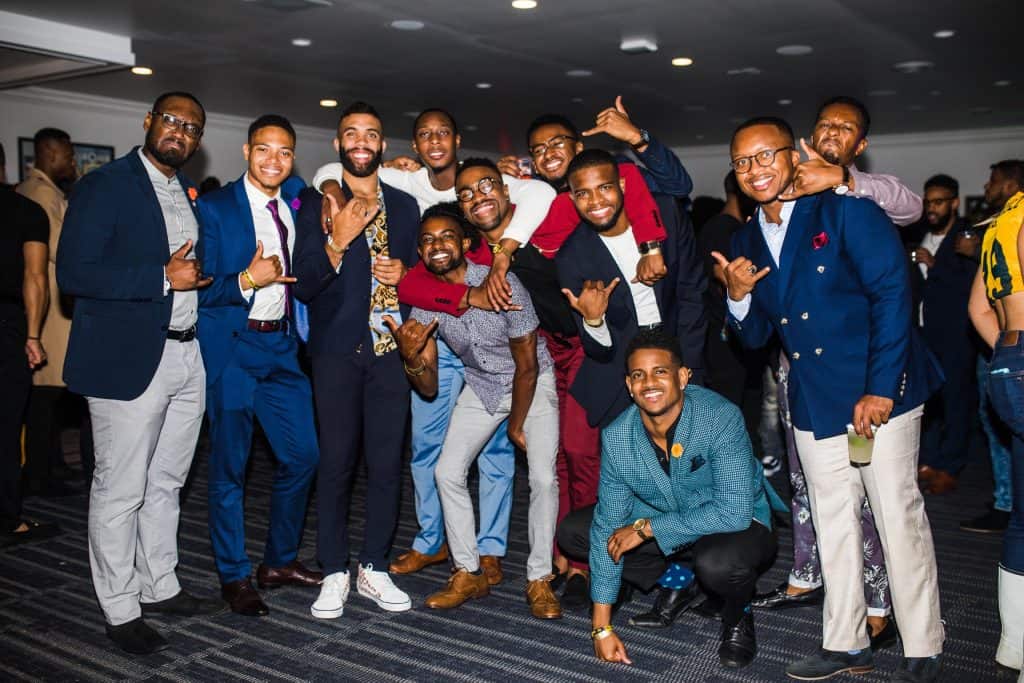 What do you plan on doing after graduation?
Once I graduate from the University of Michigan, I will be moving to Chicago where I will serve as a Human Capital Consultant for one of the top consulting firms in the world. As a Human Capital Consultant, I will provide organizations and companies across the country with advice on how they can improve their organizational culture and performance, which will ultimately allow them to have better impacts on their target communities. After gaining years of experience working with clientele, I aim to transition into the philanthropic sector where I will pioneer my own non-profit organization that will focus on the empowerment of young black males in the Detroit community. I believe it is imperative to give back and invest in black youth as I navigate and obtain successes throughout my career. 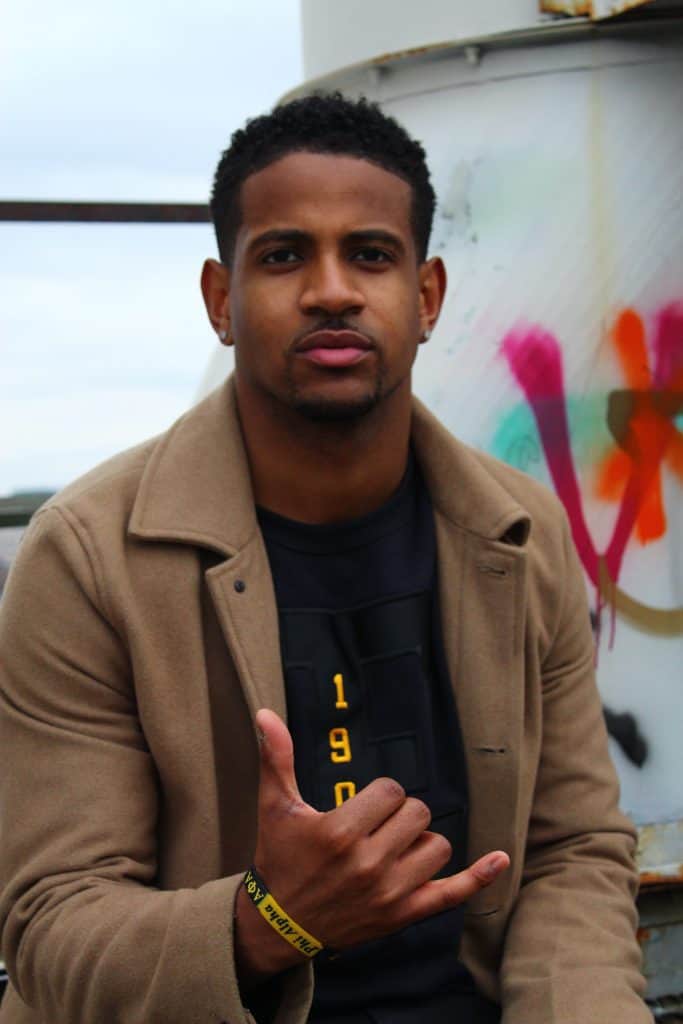 We at Watch The Yard would like to commend D’Andre Simpson for his work as the president of Epsilon Chapter which has a long legacy that spans back to 1909.