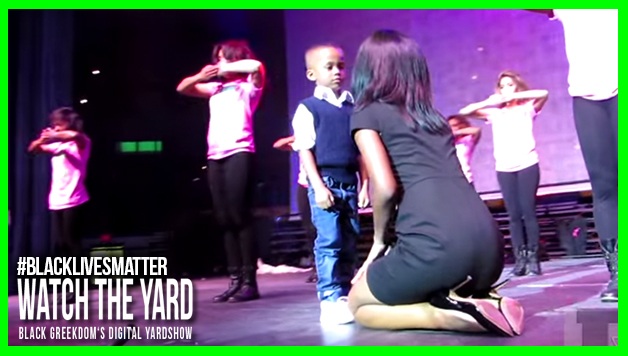 The women of Alpha Kappa Alpha at Southern University have used their platform of stepping to produce arguably the most moving step show in the history of stepping.

Instead of simply representing their chapter on stage at their school’s recent Spring Fest Greek Show, the women of the Beta Psi Chapter of Alpha Kappa Alpha used their stepping skills to make a statement about the current state of Blacks in America and the #BlackLivesMatter movement.

During their show, they paid tribute to Black men who have fallen victim to police brutality and the unjust system of racism in the United States. They open by paying homage to Mike Brown by performing a step in hoodies, then move to a poem where a sister proclaims “I’m tired of our Black brothers being killed over some nonsense,” closing with “This Is A Serious Matter!” The steppers then do an “I can’t breath” step, referencing Eric Garner who was slain by police officers in broad daylight on camera last year.

The most moving part of the show is the end where a woman brings her Black son on stage and expresses her love for him, telling him his worth and explaining to him how much she wants him to hold on to his dreams. At this point in the show, you can almost feel the passion and the hurt the audience is feeling.

We at WatchTheYard.com would like to personally commend the women of the Beta Psi Chapter of Alpha Kappa Alpha at Southern University. As the authority on stepping and Black Greek culture, we do not say the following statement lightly.

This is probably the best step show we have ever seen.

Not only are the steps flawlessly performed and the energy of the performers emanates from the stage, the show takes the focus off Alpha Kappa Alpha and addresses REAL problems that our culture is facing and displays them with a passion that anybody, Black or white can understand. The shows proves that we as greeks can use our platforms and our talents to make statements and promote social justice.

This show truly displays what Black Greekdom should be all about.

We would like to ask you to share this post with as many people as possible as we truly believe that it is a perfect display of how stepping can be used to promote social justice and the greater good of the communities that we as greeks represent.