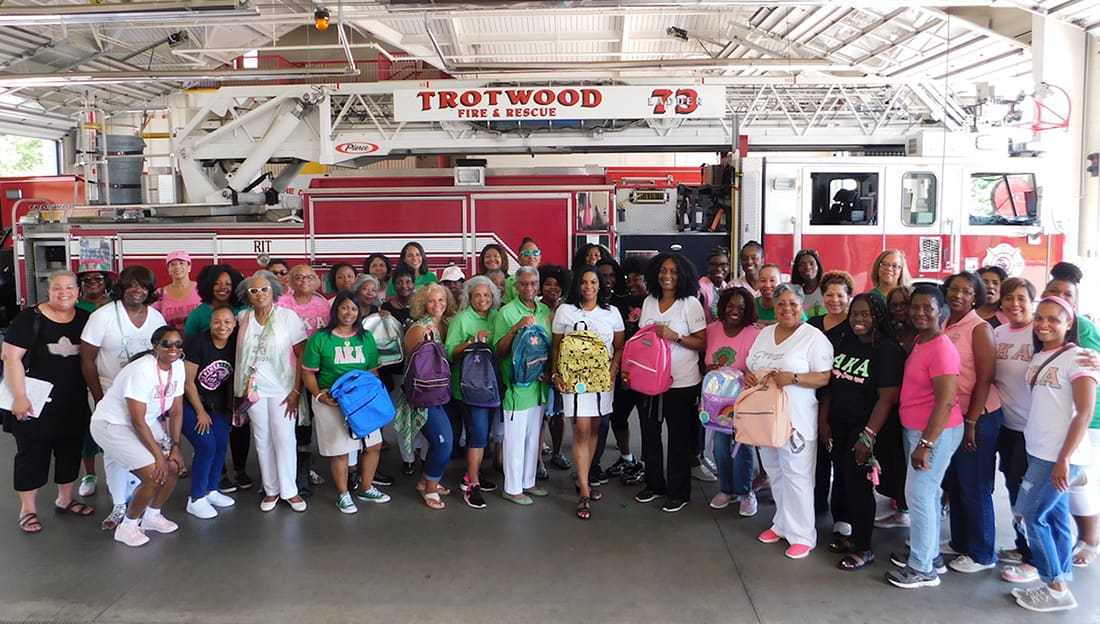 Alpha Kappa Alpha sorors from the sorority’s Great Lakes Region have rallied to help make sure school children near Dayton, Ohio have what they need for the upcoming school year after many of them lost everything during tornadoes in May.

According to a press release sent to Watch The Yard, sorority members from five states in the Great Lakes Region came together to donate more than 900 backpacks filled with school supplies and other needed items to students in the Trotwood-Madison City School District many of whom who were affected by heavy destruction when multiple tornadoes ripped through their neighborhoods earlier this year.

The donations were a part of the Great Lakes Region’s first ever “Make a Difference Day… After the Storm” held on Sunday, July 28 and was in response to a backpacks and school supplies donation drive by Dayton radio station 92.1 FM WROU.

“We’re here to make a difference and we’re doing it by being on the ground, working hard and by giving back.” Alpha Kappa Alpha Great Lakes Regional Director Carrie J. Clark stated.

“Our Sorority is founded on service, giving back, and service to all mankind. So, this is what we do. This is our mantra. This is who we are,” Clark said. “So to be able to be a part of something that is bigger than all of us, to be able to help those young kids in the middle schools who are in need of school supplies, it’s touching.”

Faith Daniels, Program Director for 92.1 WROU, said, the backpack donation “is the most incredible outpouring of love for the city of Trotwood and the children of Trotwood and the Greater Dayton area.’” She said she was grateful to Alpha Kappa Alpha Sorority because the Sorority, “came through in a way that I had asked God to do because the donations were looking a little slim.”

The Great Lakes Region of Alpha Kappa Alpha Sorority, Inc. is comprised of Ohio, Michigan, Western New York, Western Pennsylvania and West Virginia. Each of the Dayton-area graduate chapters: Rho Omega in Wilberforce, Beta Eta Omega in Dayton and Tau Lambda Omega in Trotwood had members who were directly impacted by the storm.

The sorority and Great Lakes Region also donated over $10,000 to families in need.