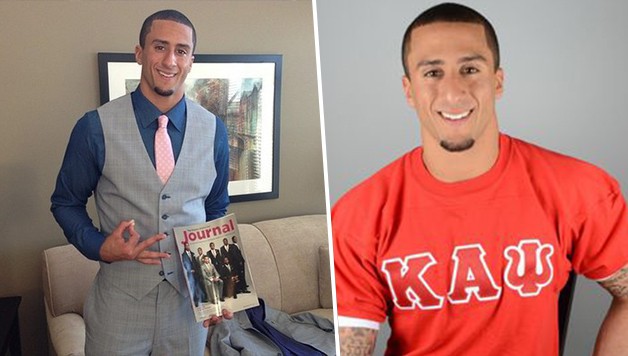 This opinion piece was written for WatchTheYard.com by Demar F. Lewis IV on 9/12/16

When I first saw the news breaking about Colin Kaepernick over the weekend, I was shocked to see the array of posts that people were “liking” and “sharing” across social media. Some were overwhelmingly positive, highlighting his bravery to speak out on a pressing social issue that many people are denying even exists. Others were not. Black people and people of color have also taken to social media to slander Kaepernick for being “unpatriotic”, “irreverent”, “ungrateful, “a shitty quarterback”, etc., and suggesting that he should leave the United States if he is unhappy here. Given the severity of this situation, it is important for us to convene as an NPHC community to discuss the implications for the work that we do.

To be perfectly clear: I support Colin Kaepernick’s decision to sit down during the national anthem. I haven’t sung the anthem or placed my hand over my heart in reverence to the flag for over a year now.

Like Colin, I am appalled at the way that the United States consistently chooses to allow for Black people and communities of color to suffer at the hands of police officers and other institutional forces that have yet to be held accountable. As a NUPE, the tenets and values of Kappa Alpha Psi Fraternity, Inc. are an integral part of my life’s work. I am driven to ACHIEVE in my endeavors by fighting to rectify issues of socioeconomic injustice, and I leverage the education and privileges that I have been afforded in society to bring voice to issues that otherwise might go unnoticed. For these reasons, it is easy for me to stand by my fraternity brother and to appreciate the steps he is taking to bring public consciousness to the issue of police brutality and—implicitly—racial inequality.

Right now it is important that we stand together as a collective NPHC to provide our unequivocal support of Colin Kaepernick. We all know that our communities are struggling and that the racial and political climate in America needs to change. While this small action—publicly voicing our support for Kaepernick—may not fully align with our personal politics, we have a duty to protect the legacy, identity, and future of our illustrious organizations. Our founders’ and elders have made sacrifices like these throughout history, so the least we can do is to fight to protect the integrity of one of our own in his time of need.

Additionally, it is important for us as a Greek community to also celebrate Colin Kaepernick for the positive things that he has demonstrated to us over the last week and over the course of his six year career:

1. He is able to speak about social issues in an intelligent, sophisticated manner

One of the things that pleasantly surprised me about Kaepernick’s public demonstration is the level of consciousness that he brought to the questions he was asked in his post-game interview with the press. Not only was Colin clearly able to articulate his position and the motivations that inspired him to act, but he was also able to avoid the traps members of the press tried to set for him. Though he calls out the systemic oppression of Black people and people of color in the United States, he never points the finger at any individual group directly (i.e., white people)—his critique is systemic, which puts the burden on society as a collective to respond. Absolutely brilliant.

2. He is living out the objectives of Kappa Alpha Psi Fraternity, Inc.

Brother Kaepernick is a man of culture, patriotism, and honor that is an outstanding representative of our fraternity and Black Greekdom. He is a renowned quarterback in the National Football League that is among the best in the sport at his position. After Sunday games, Brother Kaepernick is one of the players who regularly participates in prayer with his teammates and opponents. Given the stance he took in protesting the national anthem, it is clear that he is astute to the social problems affecting communities that he represents and is concerned with the social and moral welfare of all citizens and residents of America. Brother Kaepernick graduated from the University of Nevada-Reno in the fall of 2010 with a bachelor’s degree in business management, so he is not just another athlete without a degree on the football field—he values education and the aims and purposes of colleges and universities. Finally, Brother Kaepernick realizes that he has a responsibility to help inspire people to take action and fight for accountability to better serve the needs of marginalized people in America. This is not a task that he can accomplish alone, nor is he trying to, but Colin does recognize that the way people experience “freedom, liberty, and justice for all” in this country is not equitable. 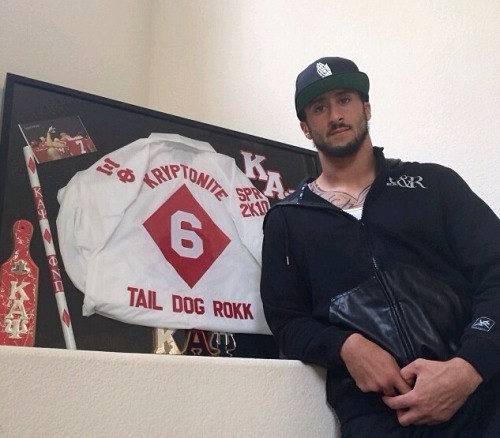 3. He is among a select group of (Black) athletes taking an active stance on police brutality, following in the footsteps of notable athlete-activists

Black athletes are not the only people stepping up to defend the constitutional rights of Black people and communities of color. The Minnesota Lynx made national headlines when the entire team was almost fined for wearing black shirts that honored the murders of Philando Castile, Walter Sterling, and the Dallas Police Department while sporting the slogans “Change Starts With US: Justice & Accountability” on the front and “Black Lives Matter” on the back. Likewise, Dwayne Wade, LeBron James, Carmelo Anthony, Chris Paul, and Stephen Curry used some of their airtime at the ESPY’s to bring attention to the issues of police brutality and gun violence that are plaguing American communities.

These athletes all follow in a tradition of social activism that is anything but foreign to the field of sports. Celebrities like Muhammad Ali and Jim Brown were heavily involved with advocating for civil rights and the constitutional rights of African-Americans, as was tennis legend Arthur Ashe. Ashe was a man of Kappa Alpha Psi Fraternity, Inc. that dedicated his life to fighting for racial justice in the U.S. and South Africa, in addition to starting several initiatives (e.g., the Arthur Ashe Institute for Urban Health in Brooklyn, NY) to address health disparities in the Black community. Pulling from an ESPN Classic article honoring the legacy of Brother Ashe, he had the following to say about his calling to social activism outside of sports: “I know I could never forgive myself if I elected to live without human purpose…without trying to help the poor and unfortunate, without recognizing that perhaps the purest joy in life comes with trying to help others.” 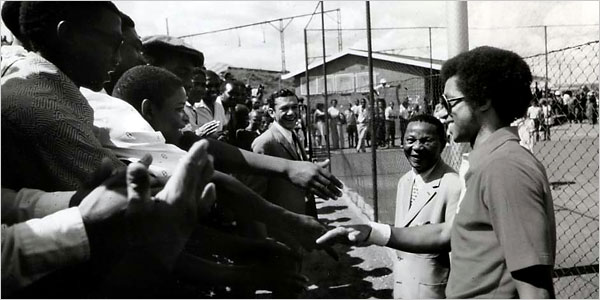 In his post-game interview, Kaepernick made a comment about his calling to social activism that is quite reminiscent of Ashe’s calling above. While it is not constructive to compare the two men athletically, it is telling that both men demonstrate a clear understanding that they are called to leverage their gifts and talents to serve others and advocate for equity in society. “This stand wasn’t for me. This stand wasn’t because I feel like I’m being put down in any kind of way. This is because I’m seeing things happen to people that don’t have a voice, people that don’t have a platform to talk and have their voices heard, and affect change. So I’m in the position where I can do that, and I’m going to do that for people that can’t…I can’t look in the mirror and see people dying on the street that should have the same opportunities that I’ve had. And say ‘You know what? I can live with myself.’ Because I can’t if I just watch…”

4. He is honest about the dichotomous relationship between his racial and national identities

The way Kaepernick describes his struggle to associate with America while Black people and communities of color are being marginalized is reminiscent of W.E.B Du Bois’ concept of “double consciousness”. Double consciousness is the notion that acknowledging an individual’s Black identity might lead them to reject their identity as American—given the nation’s history with slavery or current treatment of marginalized groups, for example—while acknowledging an individual’s American identity might lead them to disassociate with Blackness (given the nation’s historical enforcement of racial stratification & Black inferiority). Likewise, he echoes many of the sentiments articulated previously by Ta-Nehisi Coates in Between the World and Me regarding how the unjust subjugation of communities of color to police brutality and socioeconomic discrimination have led him to question the promises of the American Dream.

One consistent critique that has been levied at Colin Kaepernick is that he is “unpatriotic” for not having acknowledged the flag or the anthem. Someone else who faced a similar critique for voicing critical views of American society is James Baldwin. Baldwin, however, rationalized his criticisms with the famous saying that, “I love America more than any other country in this world, and, exactly for this reason, I insist on the right to criticize her perpetually.” Clearly, then, it is possible that some people are critical of American society out of a patriotic love for the ideals that it strives to live up to. In his post-game interview, Kaepernick never says that he doesn’t like America or that he wants to fully reject his identity as an American citizen. Rather, he contextualizes that his frustrations with America’s inability to deliver on its promises of “freedom, liberty, and justice for all” for all people have led him to protest the national anthem until further notice. Thus, we cannot accept that Kaepernick’s actions are “unpatriotic” when they actually stem from a deep patriotic love for American ideals. Even veterans and current soldiers are recognizing this with the hashtag #VeteransForKaepernick that has started going viral.

5. He is committed to the struggle for the long haul

“When there’s significant change and I feel like that flag represents what it’s supposed to represent, this country is representing people the way that it’s supposed to, I’ll stand…This is something that has to be said, it has to be brought to the forefront of everyone’s attention, and when that’s done, I think people can realize what the situation is and then really affect change.”

Keep on achieving, NUPE. We’ve got your back.