The sorority took to social media to make the announcement and highlight their new Grand Basileus. 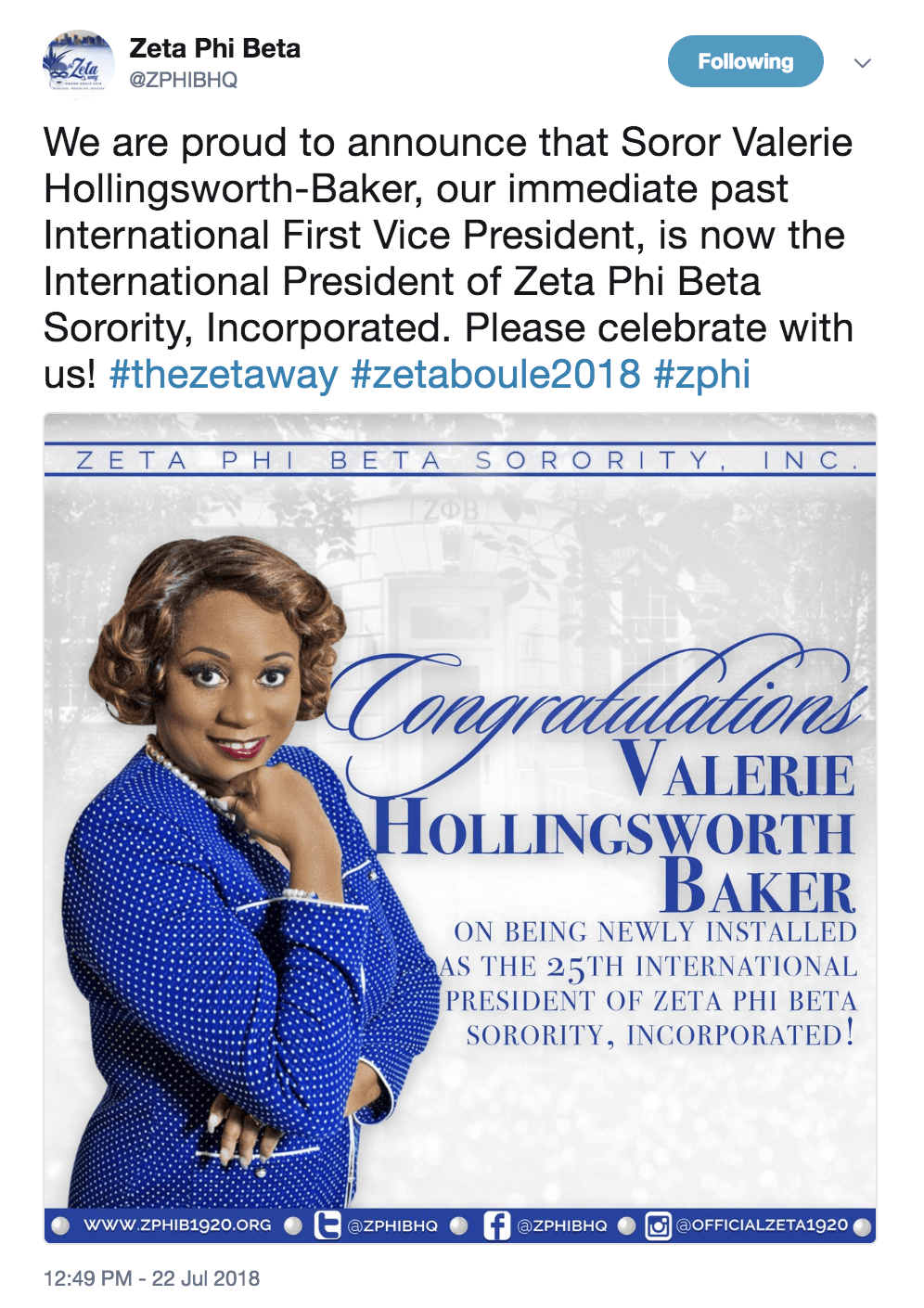 Hollingsworth-Baker also to to social media to thank her sorors for giver her their votes.

Hollingsworth-Baker is taking the role over from Mary Breaux Wright who was elected as the 24th International President of the sorority in July of 2012.

Born in Brooklyn, New York, Hollingsworth-Baker graduated from York Institute as Class Valedictorian at the age of 14. An excellent student, she graduated at the young age of 18 with a Bachelor of Arts degree majoring in Child Psychology and a minor in theater and drama from Fordham University, Lincoln Center campus.

In 1989, she started her career at New York Life Insurance Company in New York City. She would go on to hold multiple senior level and managerial roles before being promoted to her current position as Director of the Inforce Systems Division.

“As Chief Administrator for one of the major subsystems for the entire company nationwide, her responsibilities entail managing multi-million-dollar projects and programs, training personnel, overseeing new product development, as well as serving as the Project Manager for a portion of the testing division,” her campaign site states.

Hollingsworth-Baker was initiated into the sorority through its Delta Mu Zeta Chapter in the spring of 1982. She has held numerous positions on the local, state, regional, and national levels.

“In July of 1996, Valerie was appointed to the position of Atlantic Regional Director and served for four years in this capacity. As such, she served as a member of the National Executive Board and Chairperson of the Personnel Committee for the organization. In the year 2000, she was elected Chairman of the National Executive Board at the Sorority’s National Leadership Conference in Philadelphia, Pennsylvania. She worked directly with the International President, Dr. Barbara West Carpenter, in overseeing the fiscal management of the Sorority, as well as handling a variety of administrative duties. She was re-elected for this position at the National Leadership Conference in July of 2002 in New Orleans. In 2004, she was appointed by the International President, Barbara C. Moore, as a member of the original ZOL Committee (Zeta Organizational Leadership Program). She was appointed to the position of National Director of Strategic Planning in July 2012 and continues to serve in this position.”

She has served as volunteer coordinator with the March of Dimes for 18 years, as well as the Volunteer Coordinator for the United Way at her job for 10 years. She also volunteers her time with the Red Cross, UNCF and New York Cares, is a member of the NAACP and the Vice President of Hancock T & T Block Association.

According to her campaign website, Hollingsworth-Baker met Zeta Phi Beta Founder Fannie Pettie Watts in 1982 while participating in the membership process.

They became friends and remained close until she passed away in 1995. Her bio states that Founder Watts always told her, “Be the best you can be, do the best that you can, give the best of yourself, and you will go far.”

She ran her campaign on a platform of revolutionizing Zeta through high touch connectivity and n overhaul of their technological infrastructure to provide the connectivity to augment areas such as National HQ Transformation, Communications, PR/Marketing, E-Learning Platform and National Conventions.

We at Watch The Yard would like to congratulate Hollingsworth-Baker on her new position and are excited to see how she builds on the already rich legacy of the sorority.