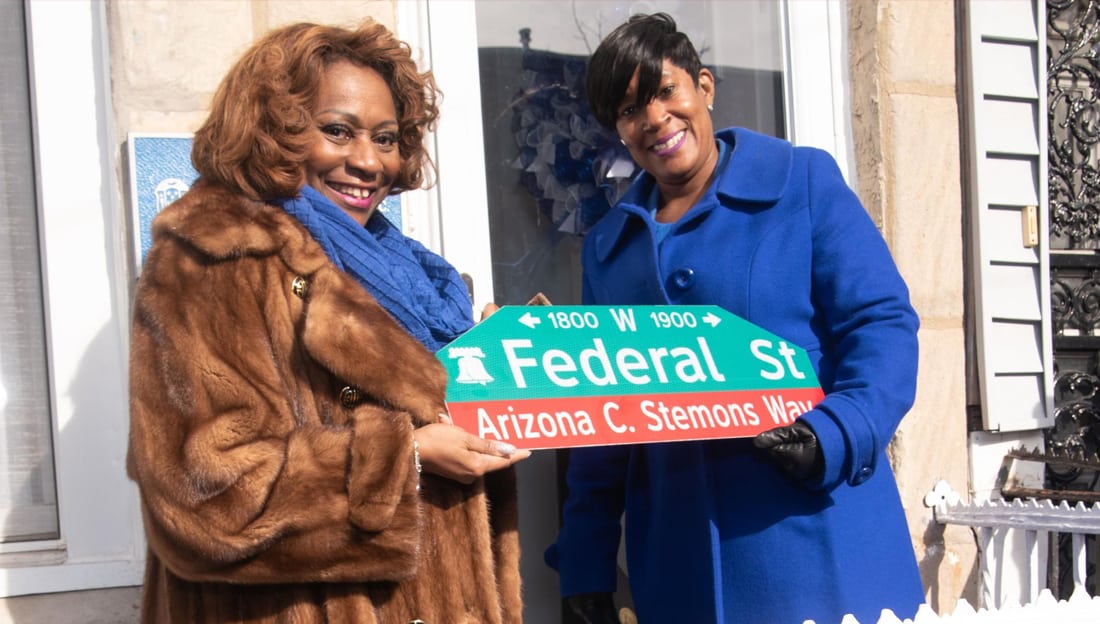 NOVEMBER 23, 2019 – PHILADELPHIA – Councilman Kenyatta Johnson (District 2) along with state and local political and sorority leaders unveiled the new street sign for the 1900 block of Federal Street on Saturday, Nov. 23, 2019, during a public ceremony from 10 a.m. to 2 p.m.

The co-naming was part of the chapter’s 75th Anniversary Weekend which included a Gala on Friday night, and Worship and Prematurity Awareness program Sunday, Nov. 24.

“This area of South Philadelphia is changing. We’re experiencing something called gentrification,” Johnson said during his remarks. “What makes this street renaming very fitting for the next generation of young people that grow up here in South Philadelphia, while it’s changing, they will look up to this sign and know the history of a great person that contributed not only to the City of Philadelphia, not only to the State of Pennsylvania, but our country.”

“Young people from all over the city, can walk down the street and be able to look up at a name, it will be a name, particularly for our young sisters, of a woman who looked like them. It will be a name of a person who believed in them,” Harris said.

Stemons, Zeta Phi Beta Sorority, Incorporated’s organizing founder, first president and President Emerita, lived in service to Philadelphia’s most vulnerable citizens for decades as a social worker for the Department of Public Welfare. She organized the chartering of dozens of chapters of Zeta across the country, including the Philadelphia Graduate Chapter. She lived at 1915 Federal Street for 52 years until her death in 1980. The chapter currently owns and maintains the property.

Philadelphia Graduate Chapter President Dana M. Moore used the occasion to thank and honor the local residents. “This would not have been possible if it were not for the residents, our neighbors of this beautiful block, the 1900 block of Federal Street,” Moore said.

This information is from a press release issued by Stephanie L. Arnold from the Beta Delta Zeta Chapter of Zeta Phi Beta.