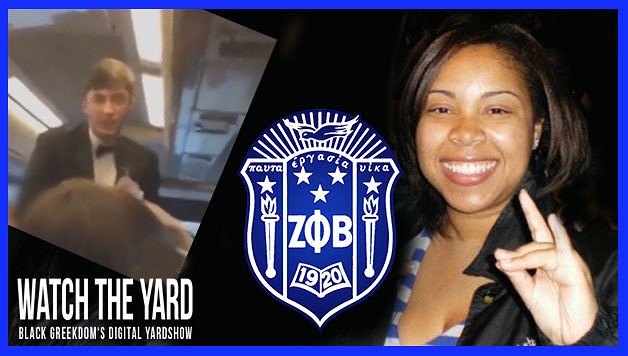 Sigma Alpha Epsilon, the fraternity that made national headlines after a video was leaked of members chanting “There will never be a nigger in SAE” on a bus earlier this year has made a major move. They have created the first ever Director of Diversity and Inclusion position in the nation and a hired a Black woman to fill the position.

Ashlee Canty, a doctoral candidate and Zeta Phi Beta sister, was appointed by the fraternity as part of its plan to root out racist behavior among members and pledges. We at WatchTheYard.com were able to catch up with Ashley for an exclusive interview about the position, her thoughts on the whole situation and her plans to fix diversity problems within the fraternity.

So Ashley, you have been chosen by SAE to be their Director of Diversity and Inclusion. Tell us a little bit about how you came across this position.

Going into the 2014-2015 academic year, I knew that I would be searching for a new position and wanted a position that would provide me the opportunity to do programs and curriculum development but also challenge me and give me more responsibility. I also wanted a position where I would be to grow personally and professionally, and have supervisors and staff to support that growth. I saw this position announced via a news story that I saw online and decided to call Blaine Ayer’s SAE’s Executive Director to learn more about the position, how it would be supported, and what the expectations were about this position. After that conversation with him and discussing it with a few mentors, I decided to apply since I saw this as a great professional and personal opportunity.

SAE has been seen by outsiders as fostering a culture of racism. Being their Director of Diversity seems like a daunting task. What made you say “I’m ready to take this on”?

I decided to go into Student Affairs because I had an amazing undergraduate experience as a Sorority Woman and Leader. I believe that Fraternities and Sororities have the greatest opportunities to create change on their campuses and in their communities. I believe in the experience that they provide and also know what my own experience has done for me. I have mentors and friends that also push and support me, and when I told them about this position they fully supported me and my desire to do this type of work with SAE. I wanted to continue to work with Fraternities and Sororities and I wanted to make a change. My doctoral research is addressing the experience of Sorority women as they work through challenges faced when confronted by Racial and Gender Microaggressions at Predominantly White Institutions, so I am very passionate about issues around inclusion, diversity, and social justice. This position came at a time when I was looking for something to address the work that I want to do and the passion that I have to do it.

Your appointment is part of SAE’s four-point plan to combat numerous allegations of racism that emerged after members at its University of Oklahoma chapter were caught singing a racist chant in March. What are the other three points?

The four point plan is as follows:

As a Black person and a woman, what do you think will be your greatest asset when approaching your task of “enhancing diversity”?

My experience in working with Fraternities and Sororities on college campuses will be a significant asset because of the background I currently have in addressing these issues on a college campus. The excitement around this position is also a great asset to me and my ability to do the work that I am here to do.  Although I am not a member of the organization, the men of SAE have been very welcoming since my arrival, not just the staff in the office but undergraduate members and alumni.  I think the challenge of not being a member will mean that I have to be intentional about building relationships with the alumni, undergraduates, and volunteers. Overall, the fraternity membership is very excited about this position and about the work that SAE is doing in the area of Diversity and Inclusion.

Increasing diversity within the ranks is a great move by SAE but how do they plan on getting minority students to join now that they have such a controversial image with this group.

One are that I work with through this position will be to assist chapter members, alumni, and advisors to create a more inclusive environment, and that includes many more areas than just race. It is important to think of diversity in other areas of race, so that we can begin to appreciate the lived experiences of our complete identities. So it’s not just about getting more “minorities” to join but to create opportunities for dialogue around difference, to create safe spaces for all members and all of those that choose to join. I also have the opportunity to work with the marketing of the fraternity and helping to make improvements on the perception of SAE to prospective members, families, and non-members of the fraternity.

Now that you have an insider’s perspective, what do you believe are the benefits for a minority student to join SAE?

After years of working with Fraternities and Sororities on college campuses, I believe that all Fraternities and Sororities provide benefits to members. I think that for minority members you need to make sure whatever organization you join is a good fit and to make sure that the values of the organization are congruent with your own personal values. The true idea of membership, in particular for SAE, is not about do they fit a perceived stereotype, but can this young man live up to the values and the creed of the fraternity.

What do you have planned for the upcoming year in terms of diversity programming within the fraternity?

Currently I am working on a Diversity and Inclusion program for the SAE Leadership School. I will also be working on curriculum and materials for the New Member program, Advisor Training, as well as examining data to see what the needs of the members are in terms of education and support. Diversity and Inclusion programs won’t just be stand alone program, but that will be included in several aspects of Fraternity programming and messaging.

You are a woman of the historically Black, Zeta Phi Beta Sorority, Inc., where and when did you cross?

What skills and experiences between life in Black greekdom do you plan to bring over to traditional fraternity and sorority life.

What I take from my own experience is the ability to build bridges. I was fortunate enough to have advisors that encouraged working across and within councils. That can help me to assist students in learning how to build those relationships on their campus. Through my own experiences attending PWIs I am very well aware of the challenges of creating a diverse environment and techniques that can be used to create a safe space for members and to be supportive of those who are feeling unsafe because of a portion of their own identity. My work as a Fraternity/Sorority Advisor significantly informs the work that I’ll do with SAE. As a Fraternity and Sorority Advisor I worked to help students learn more about one another but also have difficult conversations around diversity, inclusion, and sexual assault education and prevention, which are all things that I will be working with here at SAE.

As the first greek diversity director in the country and a member of the Divine 9, do you see any room for improvement in Black greekdom?

I think the obvious answer is hazing. Our new member procedures have changed drastically over the past ten years, and it seems that with each change it’s not solving the issue of hazing with out our Organizations.  Black greek organizations were built upon the notion that we are here to uplift and support members of our community that needed a safe space. A space where they felt supported in college and a space that helped them to find opportunities and build relationships. Hazing is a direct contradiction of that. The same people we’re supposed to uplift are the same ones we’re causing physical and emotional pain.

I also believe that Alumni Support is also an area for improvement. We have many good alumni that provide great support but we also have some that are stuck on the mindset of “tradition” what worked for a chapter 5 or 10 years ago, might not work and alumni should be there to encourage and support chapters in thinking outside of the box and trying new things in order to ensure that they continue to grow, development, and then return as alumni who can provide the same support.