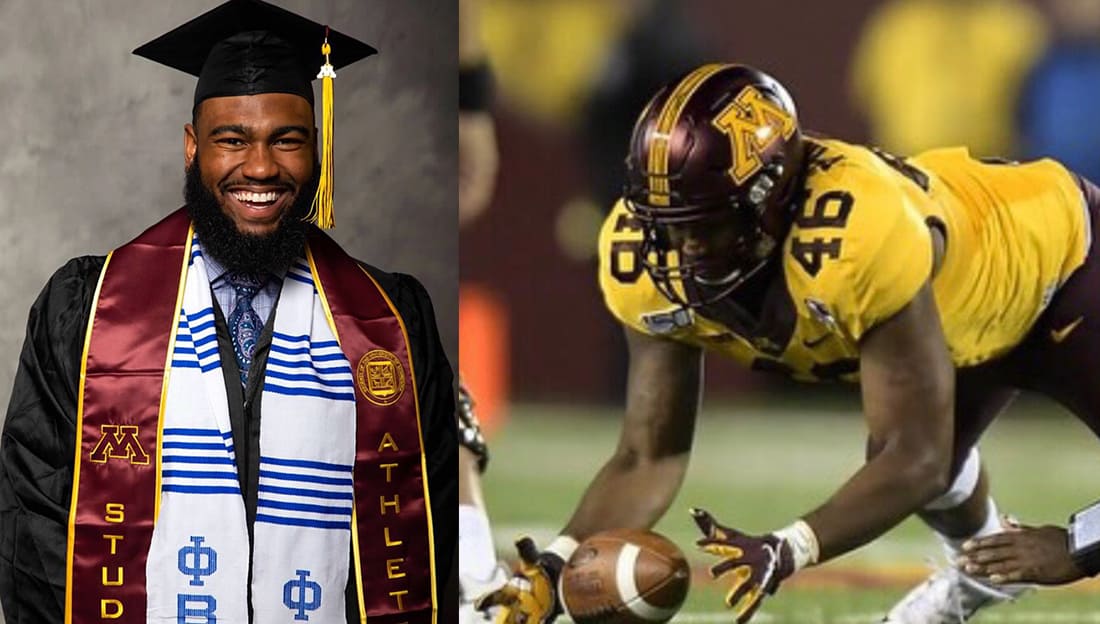 The 21-year-old was recently awarded the Big Ten Sportsmanship Award. Each year the Big Ten chooses individuals who have distinguished themselves through sportsmanship and ethical behavior who also are in good academic standing and have demonstrated good citizenship outside of the sports-competition setting.

We at Watch The Yard did an exclusive interview with the Fall 16 initiate of the Pi Eta Chapter of Phi Beta Sigma about his achievements and future.

Read the full interview below:

What drew you to Sigma?

I was originally drawn to sigma through my Father. He crossed at Bowie State University – Delta Mu. Growing up I watched the camaraderie, upstandingness and selflessness of many of his brothers that he surrounded himself with and I began to believe that is how a man was supposed to act. When I got to college myself I met Sigma men who believed in me not only as Winston the football player, or Winston the Legacy, but believed in me as Winston holistically and that’s what sealed the deal for me.

How has Sigma helped bring you to where you are today?

Sigma has helped me with a plethora of things, but one of the biggest things that I have learned from Sigma was how to blaze a path of my own no matter what setting I am in. Whether it is a business setting, an athletic setting, or a classroom setting I push myself to strive in integrity; speaking up for what I believe in no matter if everyone in the room is on my side or against me.

What would you say to athletes who are thinking about joining a Black fraternity or sorority?

The opportunity for you to be an elite athlete is there, just as well as the opportunity for service, but if you want to elevate your platform in education, service, and brother/sisterhood then it is definitely the move for you. The connections that you will make, as well as the guidance that you will be able to offer others who come after you will be more impactful than you could ever imagine.

You just played your last home game. What will you miss most about playing at a D1 school in the Big 10?

I will definitely miss the stages that you get the opportunity to play on. In my opinion nothing is more pure than college athletics, the fans are “die hard”, the stadiums are always loud, and the energy surges through the air. It was a blessing to be able to play in front of fans at TCF bank stadium. I will never forget the first time I ran out of the tunnel in 2015 to 54,000 fans and the last time to the same amount of fans in 2019. There is absolutely nothing like it in this world.

You’ve been in the program through three different coaches. What was it that made you stay?

I had faith in Jesus Christ and also my teammates to be able to stay through transition, and it turned out to be one of the best decisions I have ever made in my life. Coach Fleck has something going on up here in Minneapolis completely unique to other programs in the country and I’m blessed to have gone through tough times in order to see the light at the end of the tunnel.

You have used your platform to help others and have been recognized for it with the BIG 10 Sportsmanship Award. Why is giving back  important to you?

Giving back is so important because when you give back you give hope, love, and encouragement. Through those three things you could light a fire that gives someone the passion to change the world.

Running the drive to send school supplies to where my Father’s side of the family lives in Clarendon Jamaica was essential for me because so many children in the world could reach exponential goals and dreams if they have the supplies and means to make it happen. On top of that going to schools and mentoring young people goes a long way, often times many of them will never forget the words you tell them. 30 minutes of encouragement could change a young person’s life forever.

What is next for Winston?

After I receive my master’s degree this December and finish off my last season of college football, I will be training in aspirations to go to the NFL. When my football career comes to an end, I am looking into careers involving Law, Public Speaking, or even possibly coaching.