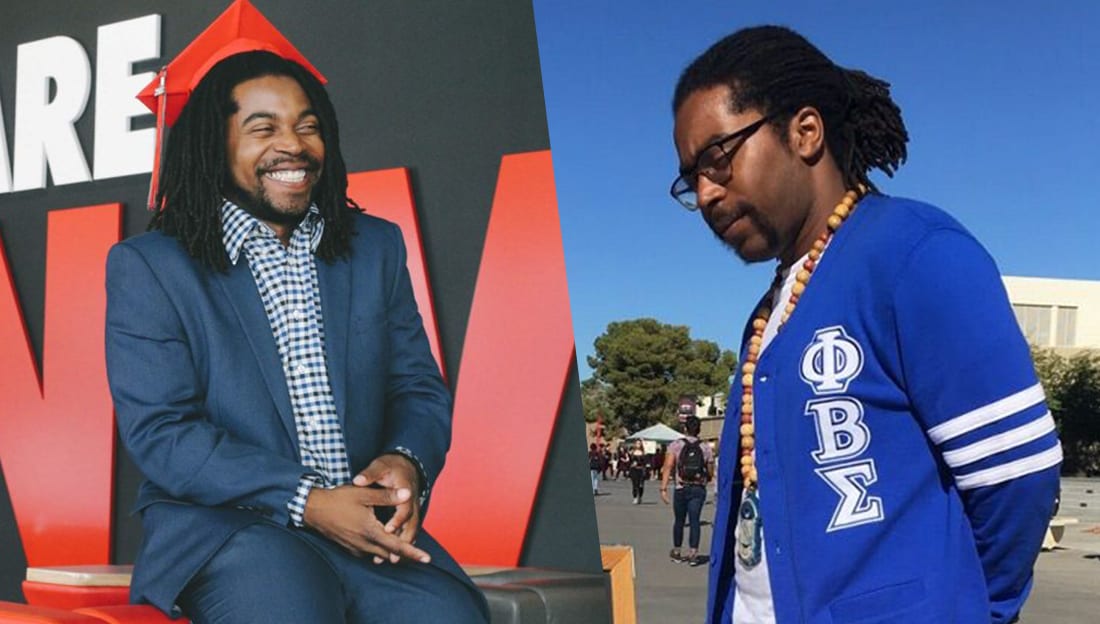 In an effort to highlight the young leaders who are leading undergraduate chapters across the nation, we at Watch The Yard reached out to the brothers of Phi Beta Sigma Fraternity Inc.’s Pi Zeta Chapter at the University of Nevada, Las Vegas and did an interview with Nicholas Vaughn the president of the chapter.

The position of president of an undergraduate chapter of a Black fraternity is a highly respected role and there is a special pride that one takes. 29-year-old Nicholas Vaughn has used the position to gain new leadership experience, improve the lives of other students on campus and help the community around him.

We interviewed the Kinesiology major and talked about his position, goals, future and what it means to hold a leadership position on campus in the digital age.

What does it mean to be a chapter president to you?
After my LB, Elliott Johnson, and I crossed our DP had to leave school for personal reasons. I became the chapter president as a neo with sand behind my ears. I mentioned that to convey that the word president has this grand sort of connotation, it was a bit overwhelming at first. It didn’t matter though, because with two Sigmas on the yard, being president meant that I get to control our narrative. The chapter has been around since 1986. people knew the old Sin City Sigmas, but times have changed and it was time for our legacy to as well. I wanted for people to bring up Sigma in conversation for doing service, for being approachable, for being hype. I wanted to leave a blueprint, those who come after me can pick up where I left off. I’ve been to national, regional conferences, Greek retreats, etc. Being chapter president had given me so many things… I’m grateful.

What made you decide to attend the University of Nevada, Las Vegas for undergrad?
Honestly, college was never the goal. My mom pushed it, but I just wasn’t enjoying school. I barely graduated high school and I got into a bunch of trouble soon after. Fast forward about six years and I’m tired, working multiple jobs and feeling down. My girlfriend at the time encouraged me to go to the local university. She said, “Get involved, build connections, and graduate.” I grew up in North Vegas and moved to the Southwest, so UNLV was really my only choice. I’m glad I made the choice because here I am, five years later, about to walk across that stage. 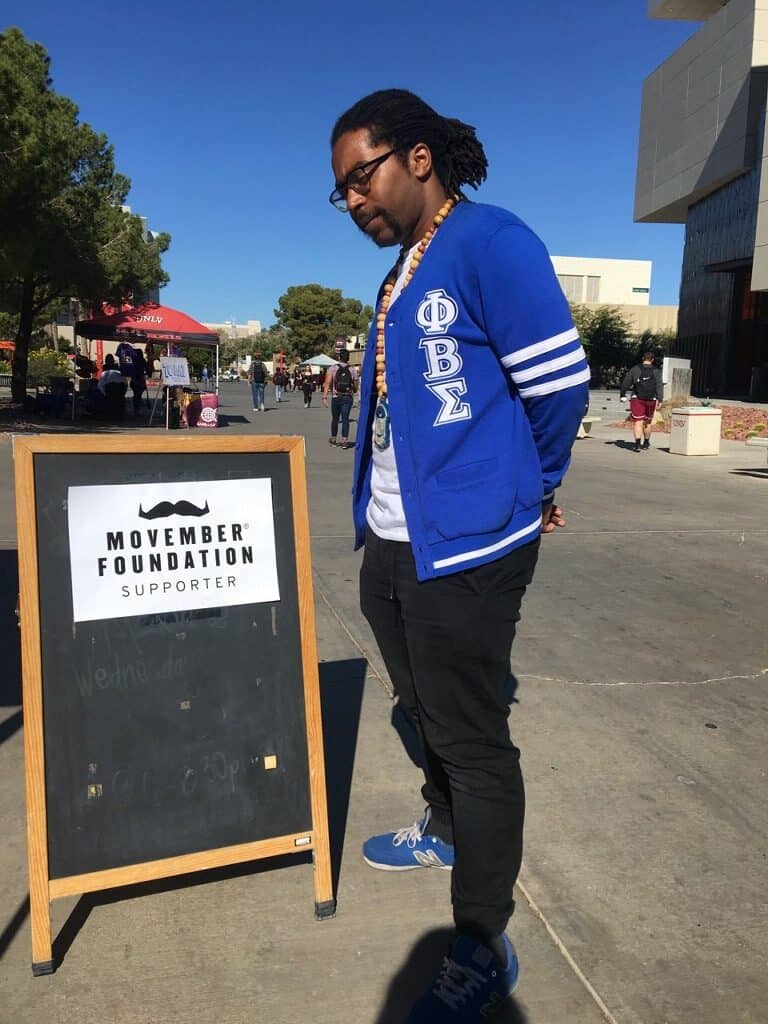 What specific initiatives is your chapter heading up this year and how do you think they will improve the campus/surrounding community?
When it comes to programming, we always aim to hit what Nationals sets out for us. Our region is pretty cool because the focus is on wellness. There are eight dimensions/categories to wellness which are: physical, emotional, mental, social, occupational, intellectual, environmental, and financial. We try to incorporate those into different events and in our everyday lives. Be the change, right?

What made you want to pledge Phi Beta Sigma?
I had few positive male role models growing up. One of whom was my cousin Anthony Turner, who crossed Sigma, FA04, Ξ chapter. He was the president of the local graduate chapter at the time. He didn’t just talk about brotherhood, he showed it to me. They all did. Every Sigma I met just moved with confidence and they handled their business. He introduced me to my now DP, Ray Hawkins III SPR13 ΠΖ. He introduced me to the Zetas from ΡΠ and I was at the next interest meeting. I came through SPR17 and I haven’t looked back. 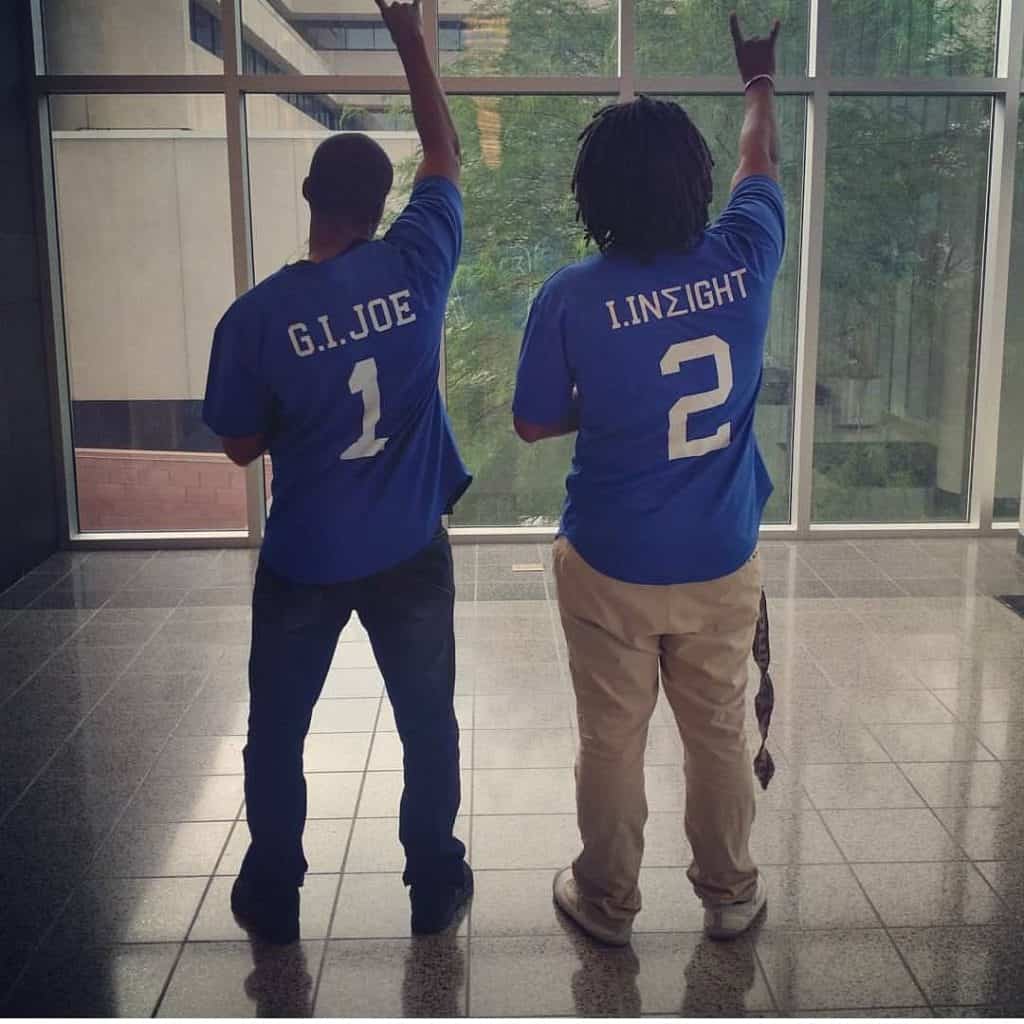 What is it about your specific chapter that makes it so unique?
We are unique in that we are Sin City Sigmas… ask your prophytes about us. All jokes aside, the brotherhood out here is serious. We will have been around for 32 years on December 12th. Thirty-two years out of the 104 years that Sigma has been around, and still there is an immense sense of pride learning Sin City history. To learn history, and then being given an opportunity to build on that reputation is a blessing. If you crossed in 86, 99, 02, 06… it doesn’t matter. You’re Sin City. If you came through graduate or undergraduate, it doesn’t matter. You’re Sin City. You’re from Jersey, Cali, Japan… it doesn’t matter. While you’re here, you’re Sin City and probably even when you go home. Honestly, the true brotherhood is what makes Sigma unique.

We now live in a digital world, what do you think undergraduate chapters across all orgs need to do to represent themselves online in 2018?
In the social media generation, I’d say to best represent your organization, as well as your chapter, you must be aware. People are quick to get an embarrassing photo or video of you, instead of correcting you. Before social media it was gossip between chapters, now it’s across the world in seconds. You must be aware that when wearing letters or not, you’re still representing your org. You’re not always the only one taking pictures of you, so act accordingly. Another part of being aware is being aware of how to use it to your benefit. If you’re winning competitions of any kind; post it. If you’re throwing a party, community service event, or TED talk; post it. 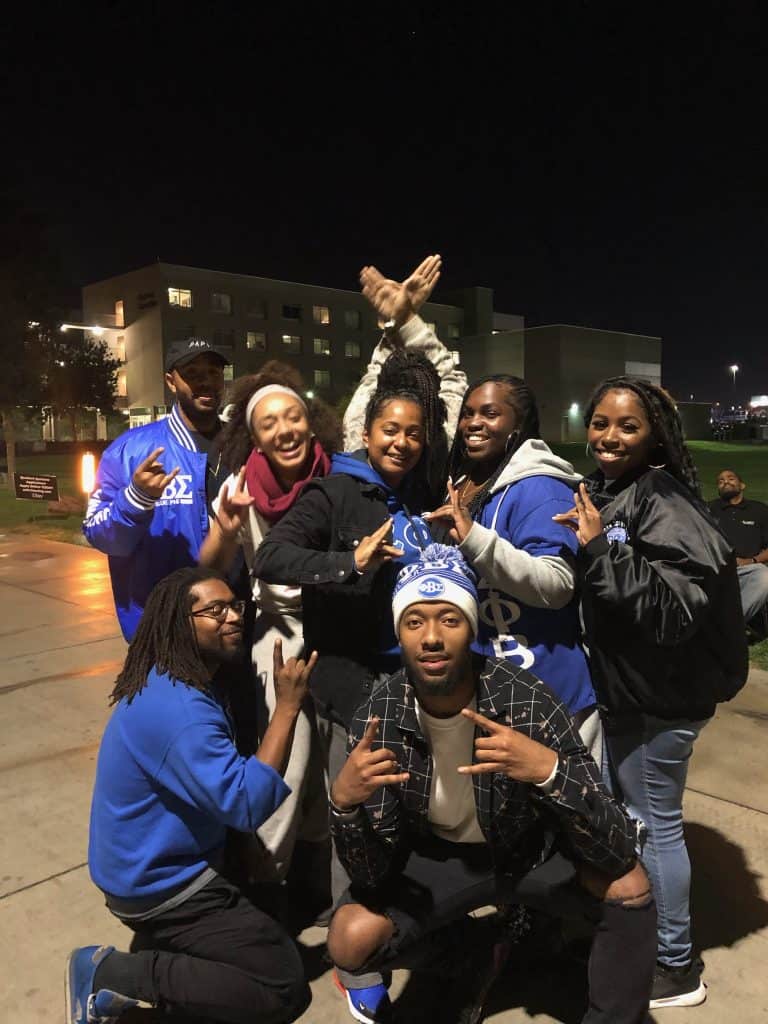 What does leadership mean to you?
Leadership is one part therapist, the other part chess master. You need to be able to listen and communicate. You should also be able to assess the strengths and weaknesses of your team and help them to extend their own boundaries. If you can’t stroll, I’m not putting you in front of the line… for everyone’s sake. Leadership isn’t about being the boss. Anyone can shout orders. It takes something else for people to want to follow. I heard a quote that stated, “A leader without followers is simply a man taking a walk.” So I look at my brothers or my employees as humans first. We all have something going on, so let me at least listen to what’s going on with you.

Why do you think Watch The Yard is important to Black greekdom?
Watch the Yard is important, not only for members of NPHC, but for Greek life as a whole. We all get bad press for hazing, sexual assault, etc. No matter the council. Most people who aren’t Greek or interested in Greek life cannot tell the difference between councils anyway. They just see Greeks do bad stuff and NPHC on my campus is small enough without all the bad press. Watch The Yard is a directory for me to send people to, to show them what our council does on a larger scale… to show them that Greek life isn’t all bad. I was having a conversation with a Greek from IFC about Burning Sands. He brought it up and I remember having to defend myself. I hate that we have so much negativity about us out there, so places like Watch the Yard, that are positive, are a necessity.

What does brotherhood mean to you?
Brotherhood is a genuine connection and feeling of love. It’s like an unconditional friendship. No matter what happens, good or bad, I know my brothers will be there with me. Life happens, sometimes faster than you expect. It means a lot to know that there’s a brother just a phone call away. I lost my nephew recently. I couldn’t get out of work that day and it was just a bad time. Throughout my shift I saw texts and got calls from so many of my frat bros. Some even showed up just to check my mental state. On the flip side, if a brother is having a baby, we show up with diapers and everything. I hear people say, “I don’t want/need to spend hundreds of dollars for friends.” I say I didn’t. I spent hundreds of dollars for an extended family across the world, and we truly are all our brothers’ keepers. 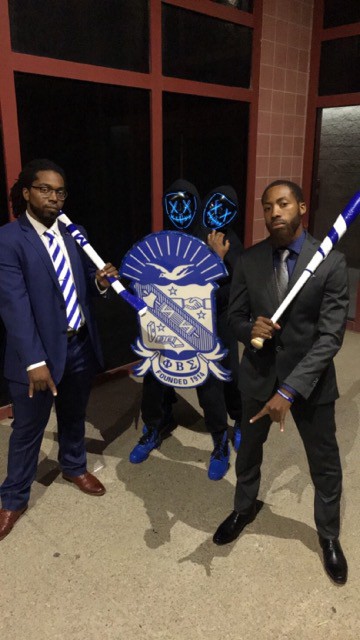 What do you plan on doing after graduation?
Since I’m graduating in December this question has come up a lot. I am in the process of applying for graduate school for counseling in student affairs, hopefully I’ll remain on the West Coast somewhere. I am also in the process of applying for jobs in the same field. As far as my future with Sigma is concerned, I would like to either be a state director or an advisor for the Sigma Beta club. I think that my past experiences, coupled with my education, would make me a pretty solid mentor. I get a chance to show kids that if I can do it, they can too. 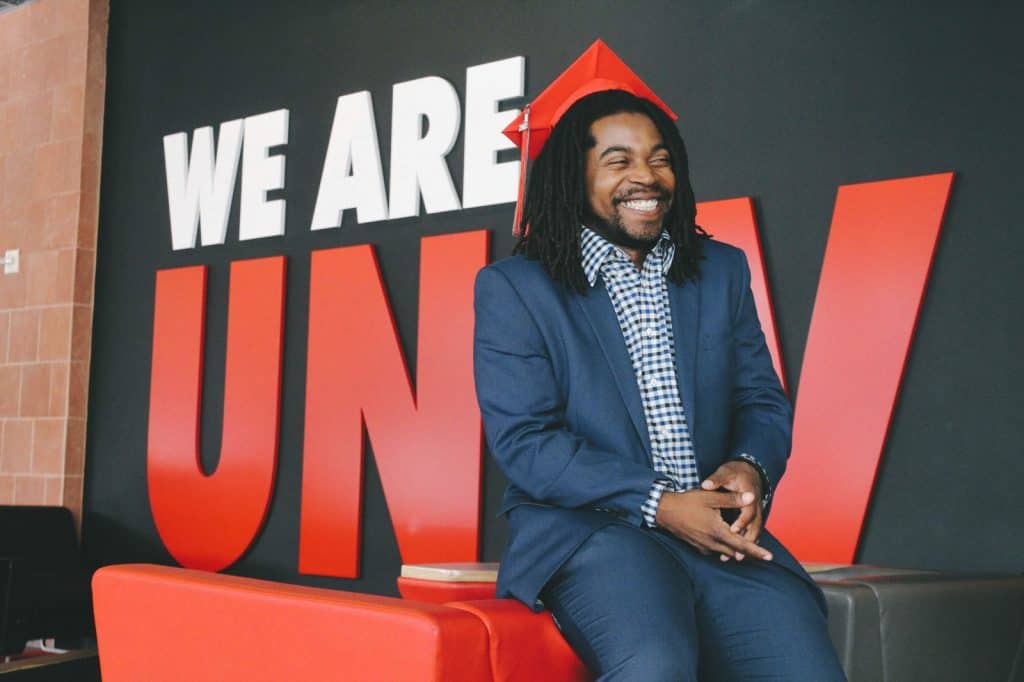 We at Watch The Yard would like to commend Nicholas Vaughn for his work as the president of Pi Zeta Chapter which has a long legacy that spans back to 1986.