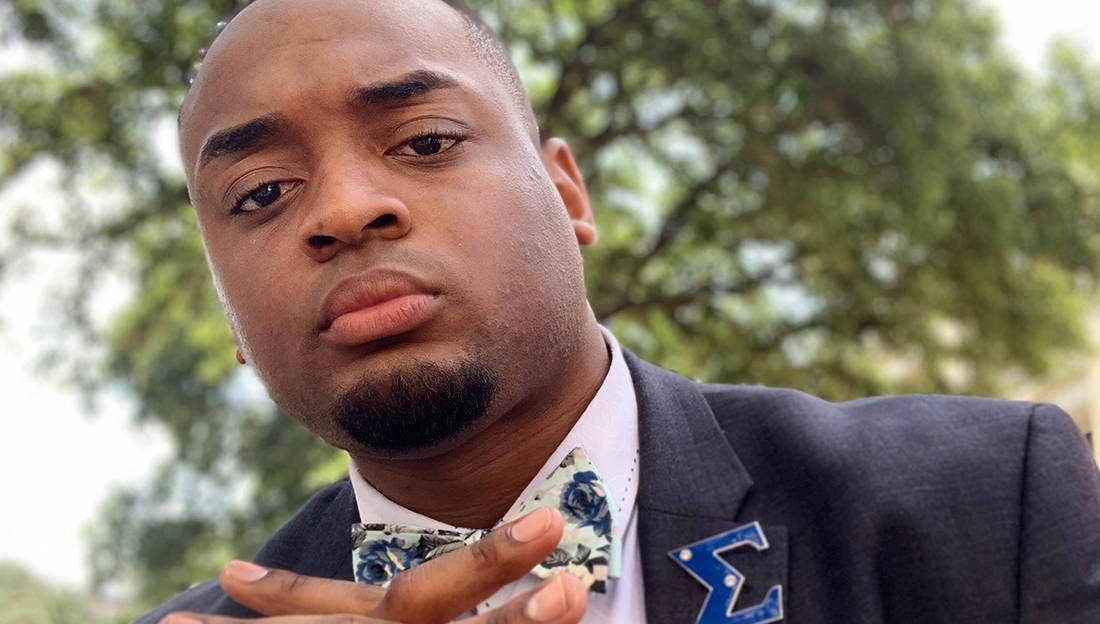 In an effort to highlight the young leaders who are leading undergraduate chapters across the nation, we at Watch The Yard reached out to the brothers of Phi Beta Sigma Fraternity Inc.’s “Reckless” Beta Beta Omicron Chapter at the University of Texas at San Antonio and did an interview with Marcus Moffett the president of the chapter.

The position of president of an undergraduate chapter of a Black fraternity is a highly respected role and there is a special pride that one takes. 28-year-old Marcus Moffett has used the position to gain new leadership experience, improve the lives of other students on campus and help the community around him.

We interviewed the Bachelors of Science in Computer Science with a Concentration in Data Science with dual minors in Cybersecurity and Digital Forensics major and talked about his position, goals, future and what it means to hold a leadership on campus in the digital age.

The position of president is the member that best exemplifies the qualities of the organization and chapter, as well as possessing the qualities necessary to lead a group who may have differing opinions in order to complete the goals decided upon by members. 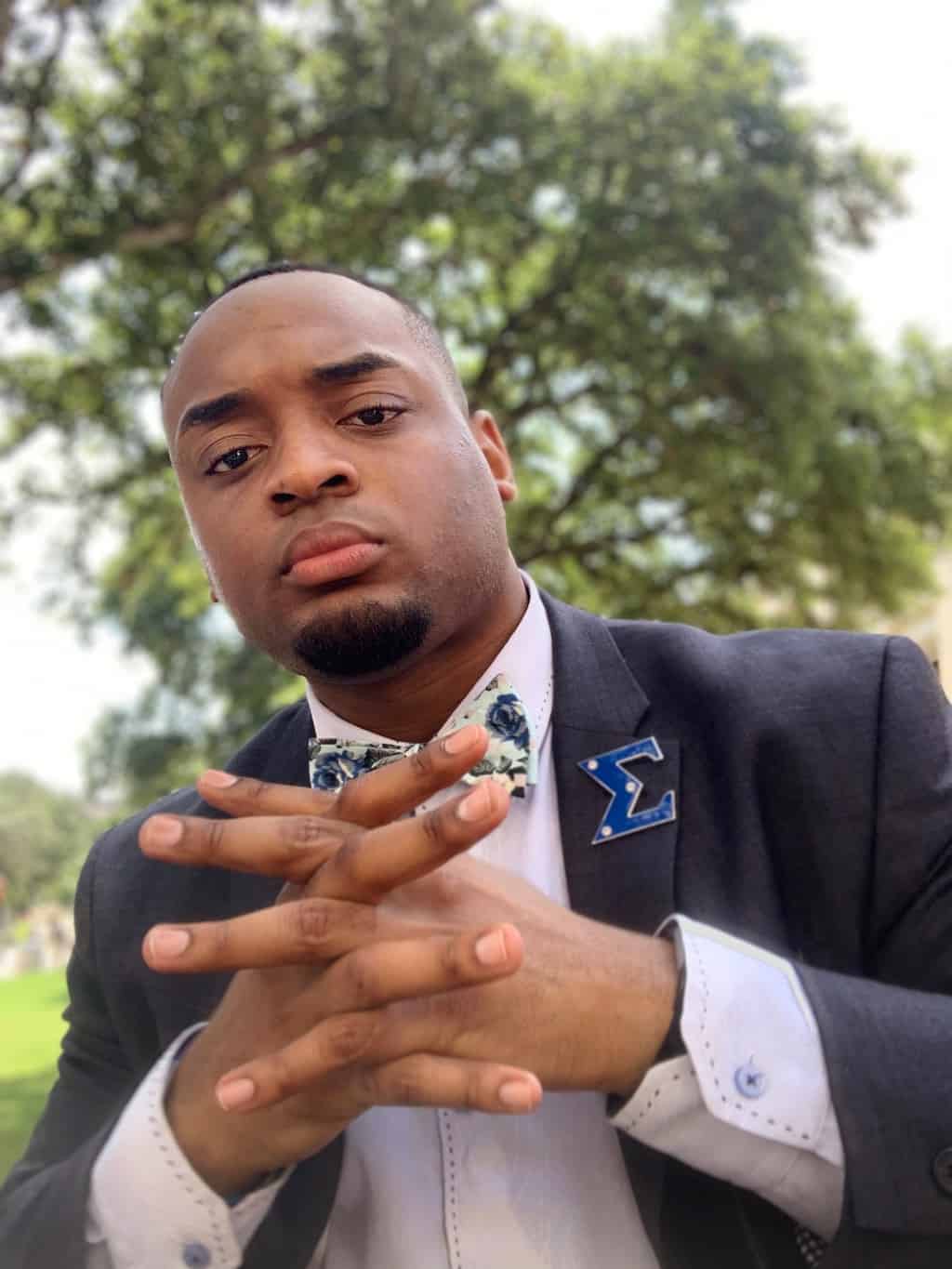 What made you decide to attend the The University of Texas at San Antonio for undergrad?

After I left the Army, UTSA was the nearest school to me. Out of all the possible choices I could’ve made (U. of Houston, UTexas, U. of North Texas, Baylor U.), I decided to look at the programs offered. UTSA had the #1 Cybersecurity program at the time, so I decided it was the best option. While the College of Business had the highly-acclaimed cybersecurity program, my studies in Computer Science had already begun prior to my enlistment, hence my minors in the business school.

Sigma-Zeta Relations is the main focus of the year. Greek Life trends seem to move in cycles, and right now it appears to be declining nationwide. One of the major bragging points that I can claim over any other fraternity on campus is that Phi Beta Sigma Fraternity, Inc. maintains a constitutional bond to a sorority, Zeta Phi Beta Sorority, Inc. Our partnership in events and causes grants us the ability to be twice as visible, while demonstrating brother- and sisterhood.

What made you want to pledge Phi Beta Sigma?

The short story is that the people I had a chance to meet didn’t try to influence me to behave any different than I already acted. I was encouraged to be myself at all times, but to do so completely; never half step and never compromise for anyone.

The full story that I usually only tell my chapter goes as follows: In my first college experience (2009-2010), I was taking a full load of about 19 hours as a Freshman. I wasn’t performing as well as I felt I should and being at a private PWI, I knew the literal cost of failure was entirely too great. As in, more than a new car great. I felt that at the time I would be better off being less of a burden to people, but before I made a permanent decision I spoke to a chaplain. He insisted I speak to someone who would be able to help me better sort my thoughts. After my first year I took a semester off, during which time I made the choice to enlist into the U.S. Army. The goal was to pay off the loans that I had accrued and return to my education. What I gained during my enlistment was a sense of connection that I hadn’t experienced during my first Freshman year at college. It was so strong that I almost made the choice to stay instead of returning to school. During my enlistment, a Sergeant Major happened to have a desk placard of an organization in his office and I asked a few questions about his opinion on all the orgs. After leaving my duty station, I sought out not only D9 organizations, but fraternities in general after my discussion with SGM. The first groups were recruiting very heavily, but the conversation felt too much like an act. The members were treating myself and others like numbers instead of people. I then walked squarely up to my future Dean and asked about a different organization altogether and he in turn told me, “You tell me where they are.” He explained to me that before I make any choice, pay attention which organizations are located where and what work they do. Ask yourself if they would fit my personality and how I present myself. Taking that into consideration, I did some historical and family research. I have had previous guidance from one organization, and my uncle and aunt were members of two others. The deciding factor was my great-aunt, a woman who I strongly consider to be my mother’s personal mentor and role model, was a Zeta. Her choice helped me solidify my choice. If she is the woman that my mother would look up to, I wanted to be the man that would work side-by-side with her. 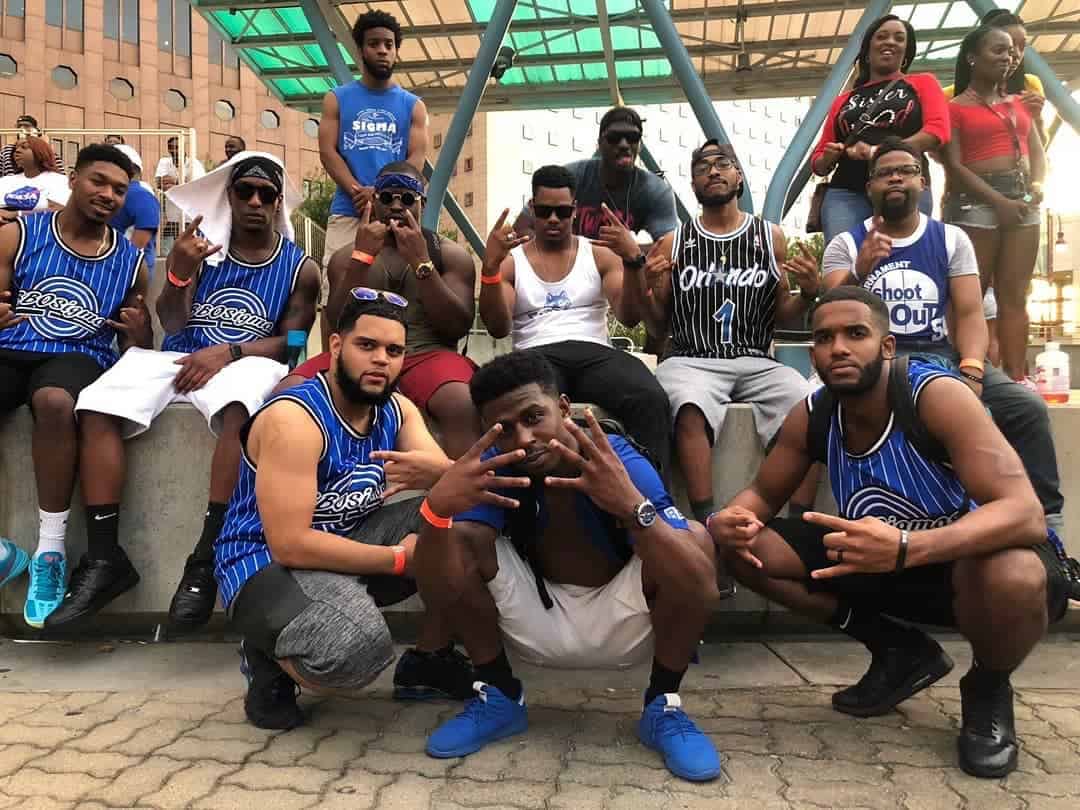 We’re a Black Greek Letter Organization at a Hispanic-Serving Institution! We have a complete FIRM Fam consisting of Sigmas, Zetas, Betas, and Gammas. While BGLOs are smaller here, we experience a lot of cross-cultural events that allow us to get a better sense of the co-mingling cultures around us.

Interact with the yard! There’s a competing sense of image between older alumni members and younger collegiate members. The idea of a business professional used to be the clean-cut, suit-wearing, gentleman. Now it’s become much more loose and your boss is likely wearing jeans and a polo with tattoos from wrist to shoulder. Chapter accounts should balance business and pleasure for more visibility. We have to be able to prove that we can be both joking and relaxed, but also be able to snap back to being serious and professional. 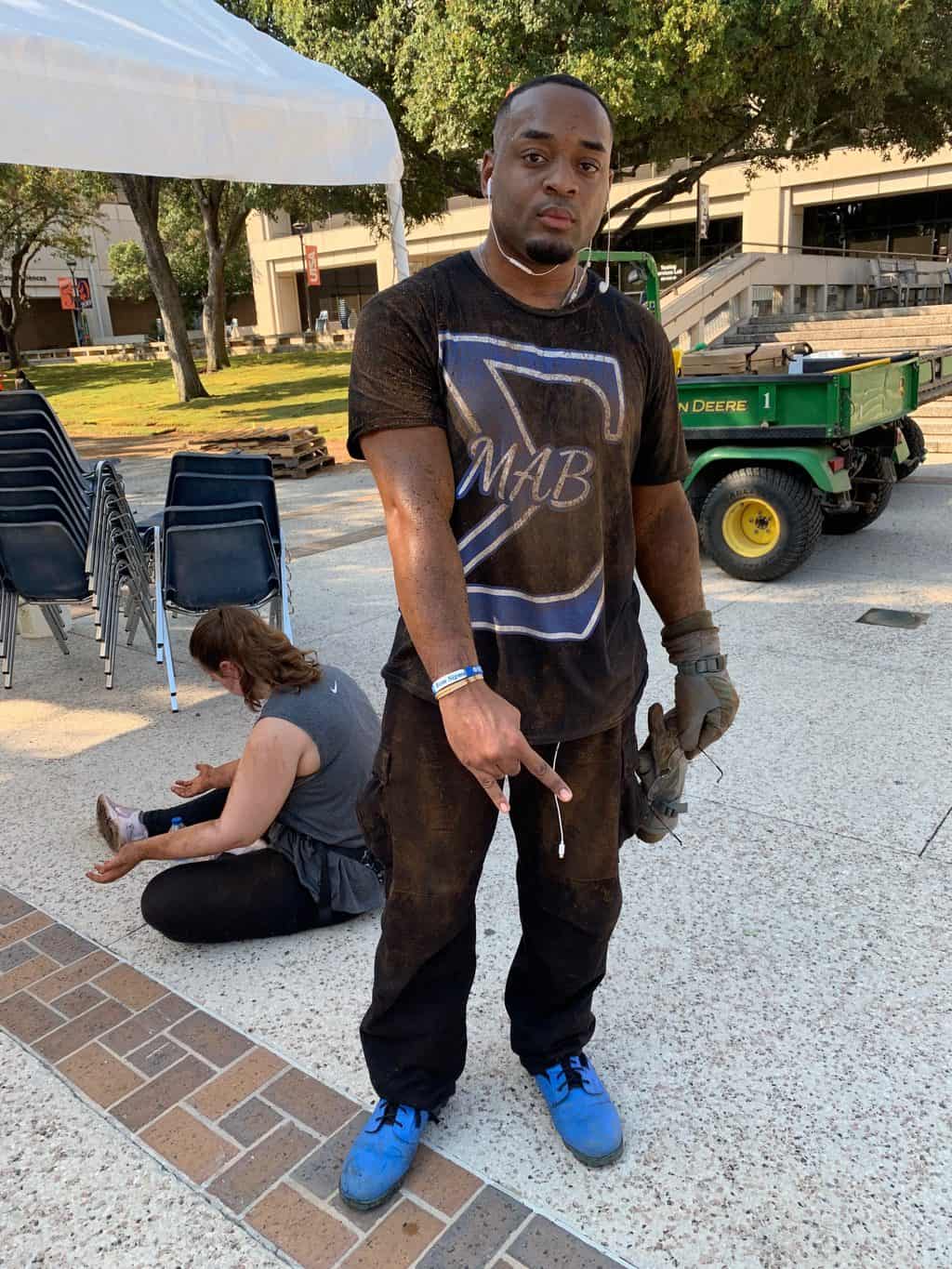 Maturity is a characteristic one possesses when they can accept responsibility for all consequences, positive and negative, arising from a situation. Leadership is when an individual can be mature in their decision making, problem solving, and interpersonal relationships from those they lead.

Watch The Yard is the digital equivalent of a museum for preserving history. It is a single resource for all to observe what BGLOs represent. 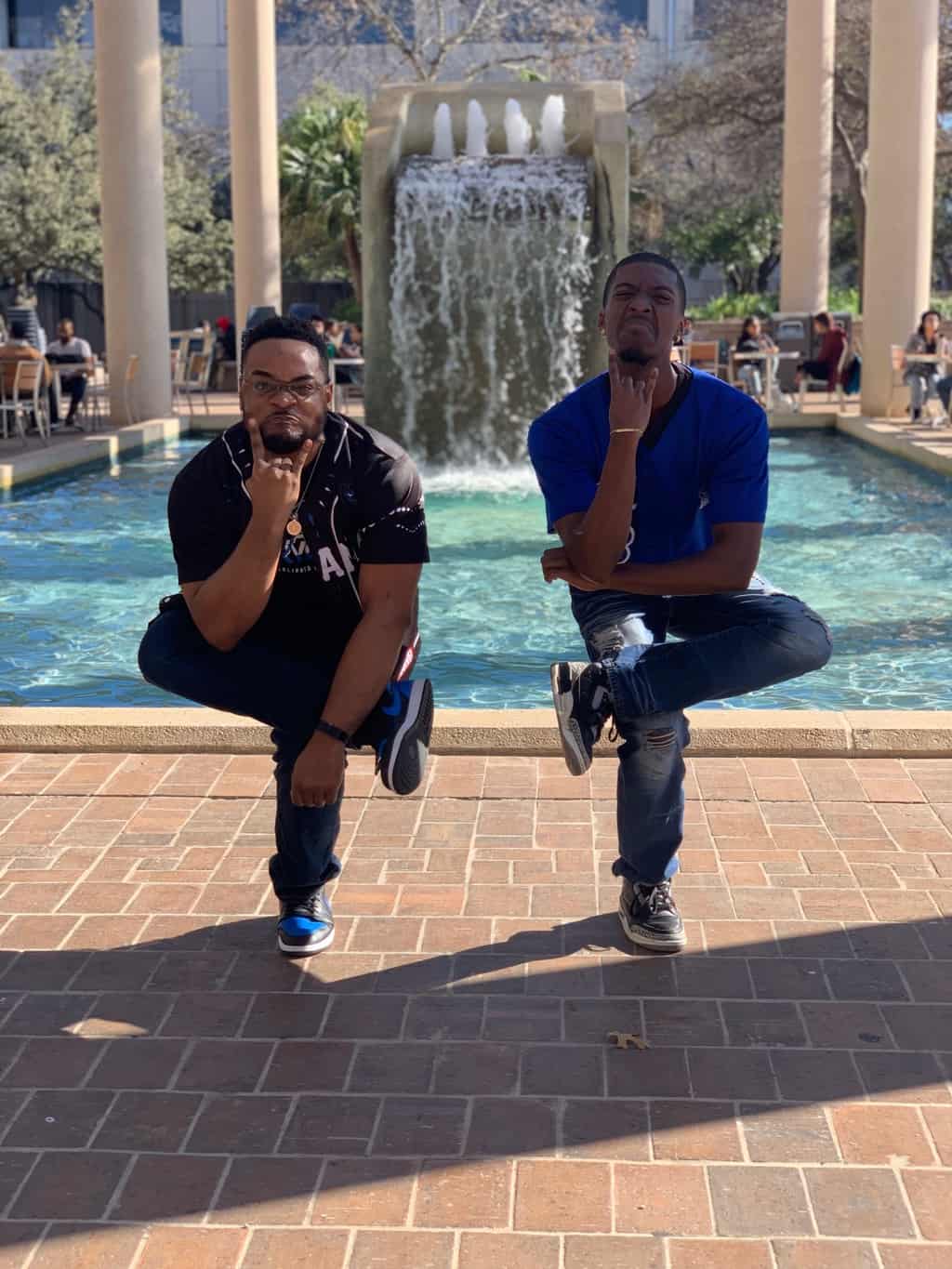 My brothers are the people I vent to, ask for advice, and roast on a constant basis. The continued love and respect we have for each other, as well as the assurance that we’re able to reciprocate the above is what brotherhood is to me. And of course, I’d do the same for my SororZ as well.

Ideally finding a position within the field of data science or cyber operations. I hope to join a team where I can make a difference in either making the world safer or removing bias from algorithms.

We at Watch The Yard would like to commend Marcus Moffett for his work as the president of the Beta Beta Omicron Chapter which has a legacy that spans back to 2006.