But did you know that one of the protests key leaders, the grad student who brought initial national attention to the protest by going on a week long hunger strike is a member of Phi Beta Sigma?

It is true, it turns out that the Jonathan Butler is a member of the black fraternity Phi Beta Sigma.

As of 9 a.m. Monday morning, it had been a week since the 25-year-old University of Missouri graduate student had eaten because of a hunger strike he began in an effort force the university president Tim Wolfe to resign and get the school’s administration to make changes because he and other university activist thought they had been unresponsive to a series of racist incidents on campus. (The school’s student newspaper made this timeline of the incidents)

Butler vowed that he would not eat until Wolfe was removed from office.

“I will not consume any food or nutritional sustenance at the expense of my health until either Tim Wolfe is removed from office or my internal organs fail and my life is lost,” Butler wrote in a letter to the UM System Board of Curators.

“Butler’s act of protest, in concert with other activism coordinated by a group of students who called themselves Concerned Student 1950 — a nod to the year that black students were first admitted to the university — has seized the nation’s attention. And, on Saturday night, members of Missouri’s football team announced that they would join the protest, and would not practice or play until Butler’s demands were met.” The Washington Post stated yesterday. 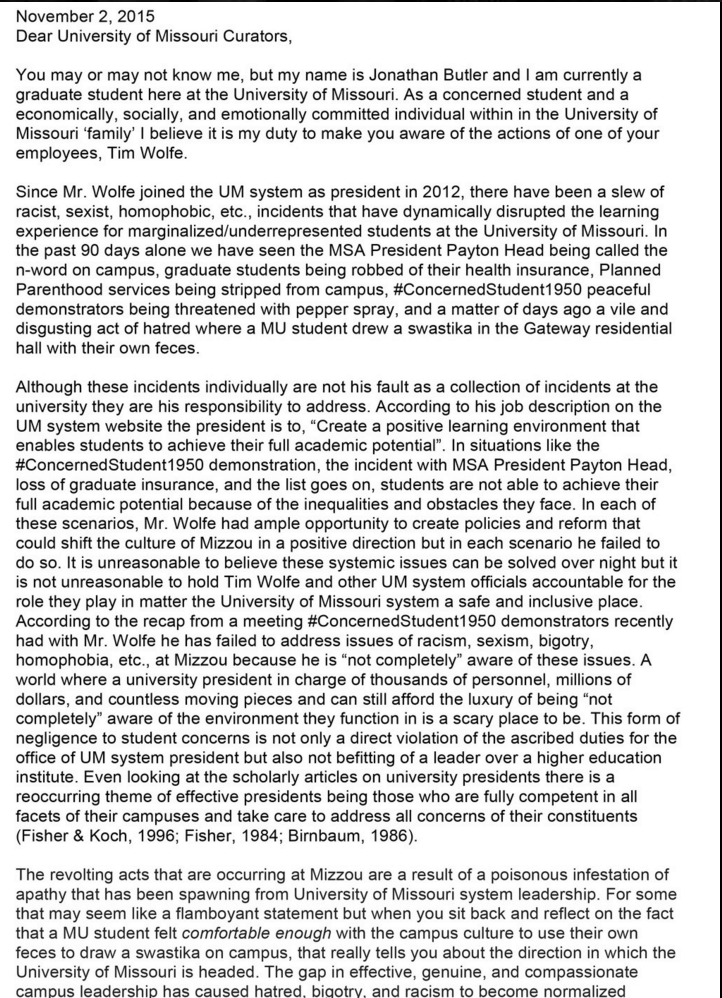 When asked about the state of his health after not eating for almost a week this is what Butler told the Washington Post:

“No one really understands what my body is going through. My body is literally shutting down. I definitely have pain all over, shortness of breath. I’m overheated one minute and then I’m shivering the next, so there is just a lot that my body is going through right now. But I don’t really try to focus on that, I’m trying to focus on the fact that I really am encouraged by the activism that’s going on. There are a lot of white allies that are coming on board, there is a lot of education, people are talking about this in classrooms.” 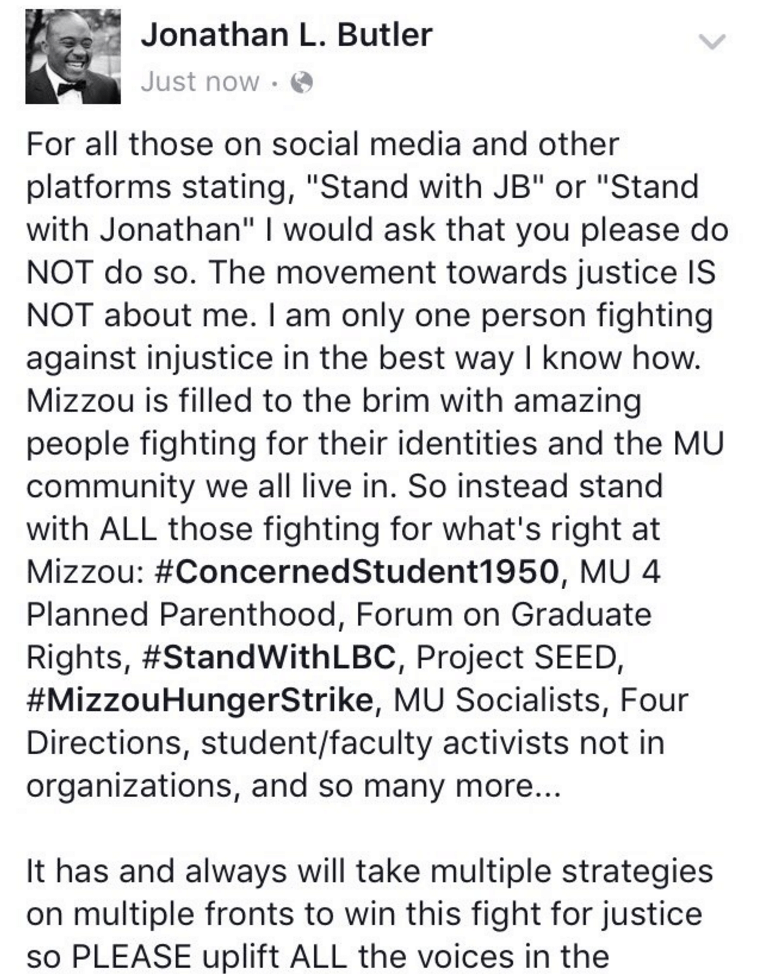 He also stated this:

“The campus climate here at the University of Missouri is an ugly one, it’s one that often we don’t talk about and it’s one that, when issues come up, whether it’s sexual assault, whether it’s Planned Parenthood, whether it’s racism, it gets swept under the rug because we want to rest on our traditions and rest on all these values that we hold in high esteem. And I think the message is that underneath all of that there is a lot of dirt and there’s a lot of pain and there’s a lot of hurt. There’s things that need to be changed. And at the end of it all, even if you don’t really understand what I’m saying, even if you can’t really understand systemic oppression and systemic racism, is the fact we can’t be at a university where we have values like “Respect, Responsibility, Discovery and Excellence” and we don’t have any of those things being enacted on campus, especially in terms of respect. I’m on a campus where people feel free to call people the n-word, where people feel free as recently as last week, to used [their] own feces to smear a swastika in a residential hall. Everything that glitters is not gold. We really need to dig deep and be real with ourselves about the world we live in and understand that we’re not perfect but understand that just because we’re not perfect doesn’t mean we don’t start to understand and address the issues around us.”

The Board of Curators called an emergency meeting for Monday morning to discuss the unrest but before that happened Tim Wolfe, the school’s president stepped down. 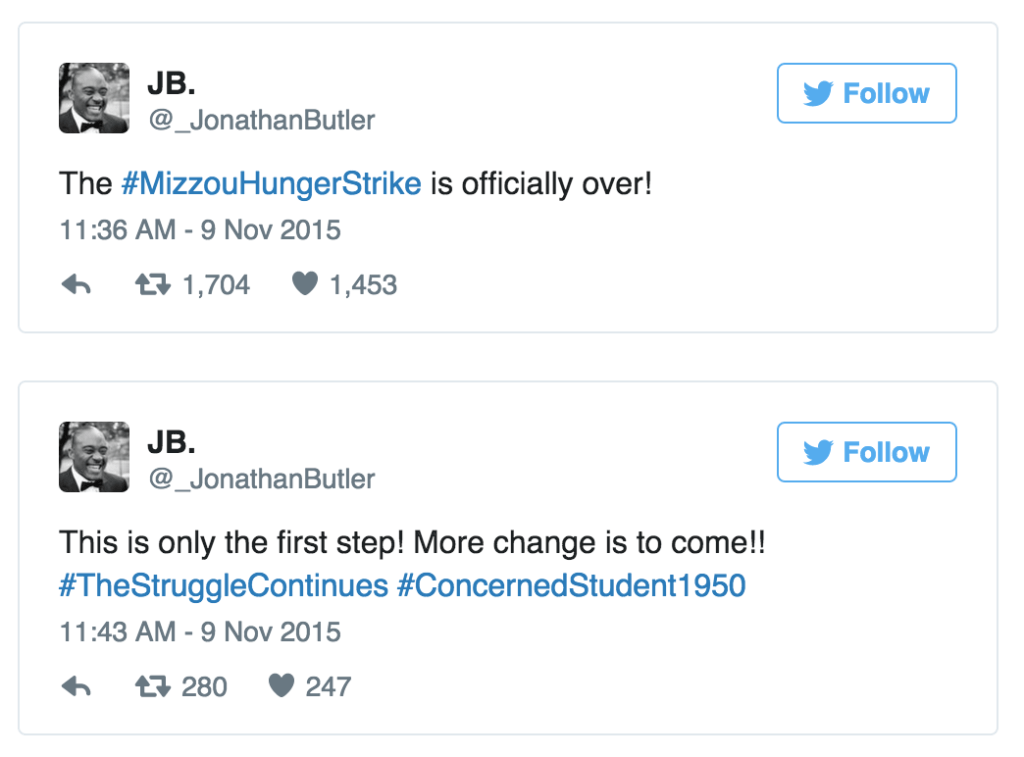 Congratulations to Jonathan Butler! His hard work and sacrifice paid off and created positive change. We at WatchTheYard.com would like to show respect to all of the students involved and because we focus mainly on Black fraternities and sororities we wanted to highlight this brother on his activism for the wider greek community to see.

Show him some love in the comment section below!