The National Panhellenic council just released a joint statement on hazing in response to the movie Burning Sands.

In their recent statement entitled ‘Joint Statement on Hazing in Response to the Movie Burning Sands’ the national presidents of each of the five fraternities and four sororities that make up the “Divine 9” were clear and straight to the point with their response.

“In 1990, the NPHC organizations issued a joint  statement announcing  the elimination of
pledging and each has instituted within its respective organization, a revised membership
development and intake process.

Each NPHC organization has instituted strong policies against hazing and has taken steps
to reinforce and strengthen its stand against prohibited conduct whether it is displayed
[through] movies, books, [or] any type of social media.

NPHC and its member organizations have developed and instituted policies against hazing
and have taken steps to reinforce and strengthen their stand against this prohibited
conduct.  Equally important NPHC and its member organizations do not condone, support,
or encourage the production of movies, books, or any type of social media that promote
hazing.” 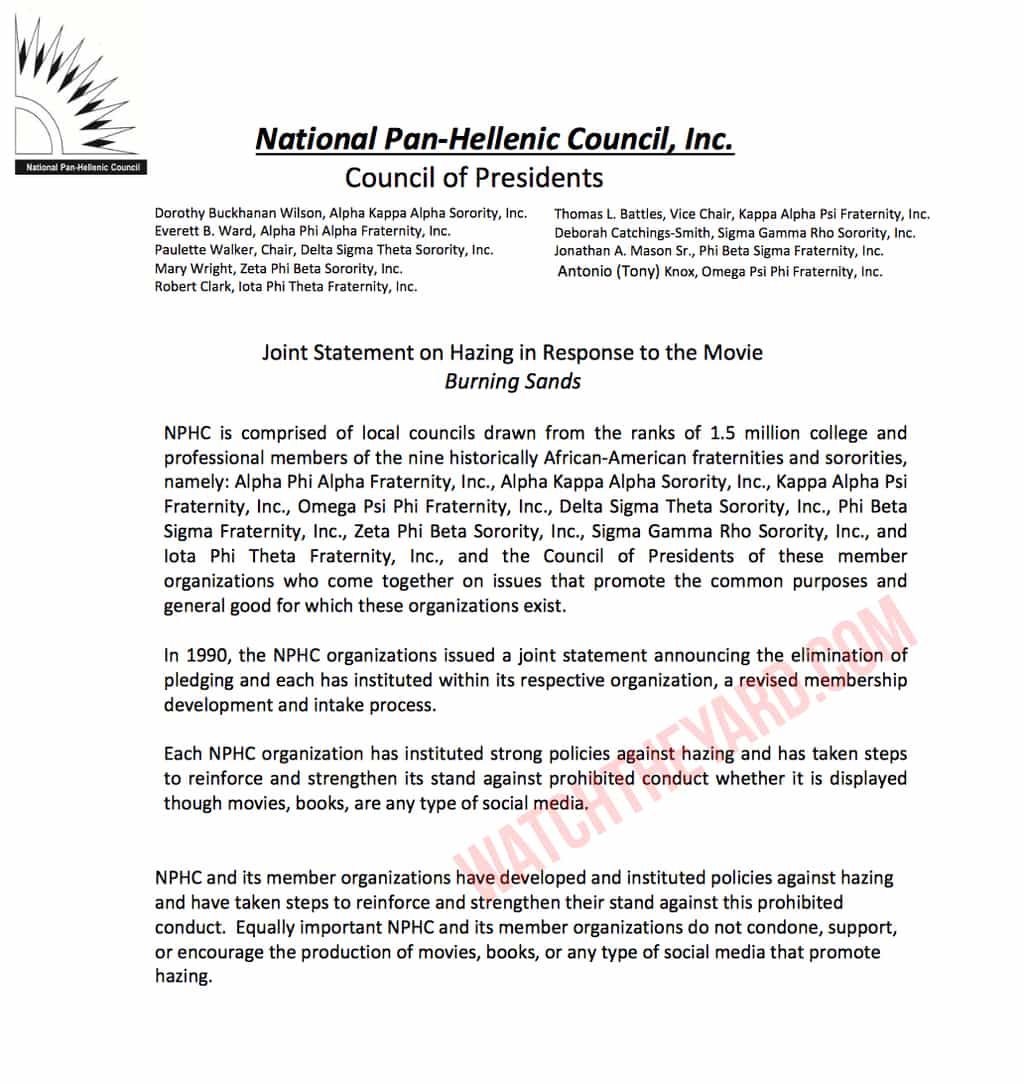 The film, directed by Gerard McMurray (a member of Omega Psi Phi who was initiated through Howard’s Alpha Chapter) is centered around a young man pledging a fictional Black fraternity at a fictional HBCU. In the 2-minute trailer alone, you see the pledges being kicked, punched, paddled, forced to drink large amounts of water, submerged under water, beat up and spit on.

According to Netflix, who will be releasing the film this week on their streaming services,

“Burning Sands takes you on a raw, voyeuristic journey of fraternity pledging through the eyes of one favored pledgee, who is torn between honoring a code of silence or standing up against the intensifying violence of underground hazing. Led by a breakthrough performance by Trevor Jackson, director Gerard McMurray’s feature directorial debut brings an emotional honesty to the classic tale of “rites of passage” and the complicated bonds of brotherhood.”

The Netflix Original is executive produced by Caroline Connor and the rapper Common.

According to Netflix, the movie will be launching on Netflix on March 10, 2017.