The show A Different World has received a second wave of popularity ever since it was released on internet streaming sites this last year and while many who watched it during the late 80s might already know this interesting fact, new fans of the show might not know that the actor who played Dwayne Wayne’s partner in crime, Ron Johnson, has been in a committed relationship with the actress who played Vanessa on the Cosby Show for 23 years in real life.

It is true. Darryl M. Bell, the actor who played Ron, has been together with Tempest Bledsoe since 1993. The couple met during Bledsoe’s guest appearance on A Different World in 1989 and their relationship turned blossomed.

Since we are a website that focuses on Black fraternity and sorority history, we want to point out that Darryl M. Bell also happens to be a Spring 1982 initiate of the  Delta Zeta Chapter of Alpha Phi Alpha. He is also very familiar playing fraternity members on both the big and small screen. Darryl has played Big Brother X-Ray Vision of Gamma Phi Gamma in the 1988 Spike Lee film School Daze as well as a brother of Kappa Lambda Nu in A Different World, both fictional fraternities.

Tempest Bledsoe also has ties with the stepping culture of black fraternities and sororities. In 1992 she introduced the Alpha Phi Alpha step show at Black Filmmakers Hall of Fame. Watch the video here.

Click on the arrows below to see pictures of the couple. 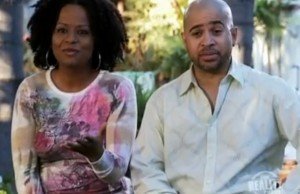