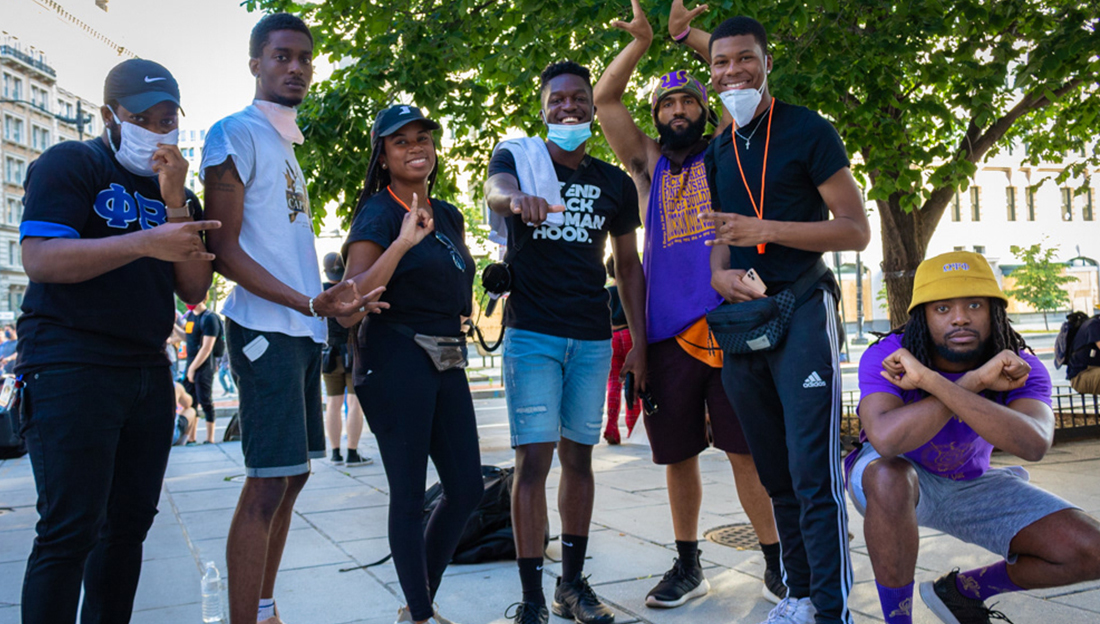 Young people in Washington DC are leading the way and making their voices heard. Many of them leading this movement there are Black fraternity and sorority members.

On June 3rd, Concerned Citizens, a group formed by five DC organizers, attracted thousands marching through Capitol Hill. The next day, on June 4th, they had a crowd of over 4,000 at both the MLK Memorial and Capitol Hill.

The organizers include Ty Hobson-Powell a DC Community Organizer currently leading the charge for DC Statehood and a Spring 12 initiate of the Durham Alumni Chapter of Kappa Alpha Psi Fraternity, Inc., Seun Babalola, a Root 25 Young Futurist Awardee who has worked with LeBron James on social justice and a Fall 2018 initiate of the Gamma Nu Chapter of Alpha Phi Alpha Fraternity, Inc., and  Aalayah Eastmond, a Parkland Survivor, Congressional speaker, and Team Enough organizer.

According to the group, they formed Concerned Citizens out of the need for an organized effort around a common goal surrounding the White House protests.

They felt that all of the folks protesting had rage, passion, and a yearning for change but lacked intentionally concentrated direction. The group then collaborated with 30 other activists and organizers around the DC area to form a list of demands, then took to the streets protesting in a way that brought the entire community together.

“We are simply concerned citizens of Washington, DC,” their list of demands stated. “We want to bring organization to the White House protests while bringing us all under a common goal. Seeing as all of us as protestors want justice, we the people have formed a list of demands that we would like both the local DC municipality as well as the federal government to address with swift action.”

Their demands are as follows:

1. Charges for the 4 officers involved in the death of George Floyd

2. Justice for Breonna Taylor and charges for all officers involved in her extrajudicial killing

3. Decriminalize marijuana and retroactively vacate the sentences of those arrested for non-violent drug offenses. In many of these instances, media reports cite “marijuana in the system” of victims slain by police brutality. Decriminalizing marijuana gives less power to that narrative.

4. Mandatory civilian review boards in every city. As it has been established, officers nationwide lack accountability. For an officer who knows that he can kill an unarmed black man or woman and only get paid desk duty as a result, anything less than that is just business as usual. We must change this reality and empower citizens of the communities being policed to hold their local forces accountable. The officer who had his foot on George Floyd’s neck had 18 complaints. He should have never been on the streets

5. Nationwide commitment by police forces to end brutal practices (chokeholds, kneeling on necks etc). We need to revisit the use of force practices and eliminate conduct that places suspects at extreme harm once in custody.

6. DC Statehood. The 700,000 Washingtonians in DC are the living breathing example of taxation without representation. We have all the same obligations but now of the same rights. This became clearer this week when Trump deployed military against peaceful protesters in a minority majority (47% black) locale. That would have never been able to happen if DC had statehood

7. Defunding MPD in favor of community policing practices through violence interrupters that have been proven to work in DC. The MPD receives over 500,000,000 a year but violence interrupters have not seen deserved funding for years. A budget is a moral document. A budget outlines the priorities of a just society. It speaks to the moral fabric of the leadership of said society. We must make sure the finalized budget is a reflection of the values we hold dear as DC.

8. Shift from punitive to rehabilitative model in prison system.

9. Echoing the words of Killer Mike, we demand that concerned citizens across this nation reflect that concern in spaces that will affect decision making. We encourage everybody to participate in the US Census and to vote. We will be responsible for the change we want to see by holding elected officials accountable. We encourage everyday citizens to organize locally around the issues most important to their community

10. See this moment for what it is and learn empathy. We are human. Our lives matter. Donald Trump, the protests across the nation and the initial acts of brutality that inspired them are symptoms of America’s most dangerous disease- Racism. Up until now, racism is as American as apple pie and baseball. The ground had been stained with innocent black blood for centuries. We are fighting now for what America will be, but in order to do that we must first be intellectually honest about what America has been and work with intention to heal the pain suffered as a result.