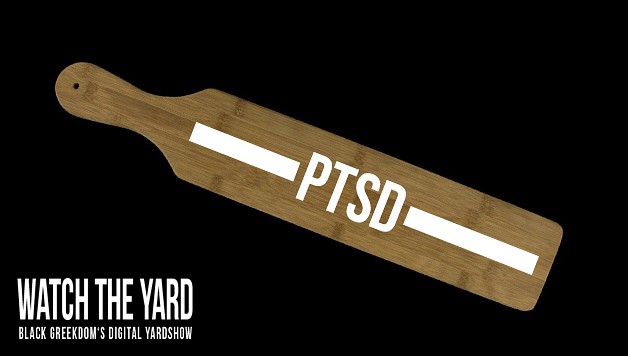 So this morning, as with most mornings, I woke up, said my prayers and reached for my phone to check my social media. Among the break of dawn Bible scriptures, “Black Girls Slay” photos and hilarious skits from my favorite IG comedians, I saw a small post from a Greek Instagram account nestled awkwardly in my newsfeed. It was screenshot of an article written by Jasmine Osby of Madame Noire entitled ” Pledging A Black Greek- Letter Organization Gave Me PTSD”. Under the photo layed the caption “#ReadArticle then leave comment after. #ShareYourThoughts #RP”. And that’s when all hell broke loose.

Normally, before I scan the comment section, I read the article to understand the matter at hand. For those of you who aren’t familiar with the story, it goes like this:

After delving into her recaps, I made my way back to the Instagram account to browse the comment section. I also pull up the Madame Noire’s Facebook page to see what discussions were taking place there. As I reviewed the article and the responses, my emotions went from 0 – 100, homie, real quick.

What People Were Saying:

Many readers offerend their 2 cents about Ms. Osby and her pledging experience. As I rummaged through the feedback, I noticed three main assesments people were making:

1) She knew what she was getting into.

2) She’s exaggerating. I pledged. It stressed me out, and I didn’t get PTSD.

3) She couldn’t handle it, that’s life. What is she complaining about?

So here’s my take (on the reponses, not the article):

“She KNEW what she was getting into.”

Let’s be real. I don’t care HOW many people you ask about the Greek pledging process, nothing is ever 100% full disclosure. Until you are in the situation, you NEVER really know what you’re getting into. The overall premise of pledging is a huge mind game to see what you can endure and how much you can endure. Things come up left and right at random. How in the hell did she KNOW what she was getting into?

Some readers suggested that she should have talked to someone and asked them what to expect? Bruh. Questions like that go against the Greek G.Code…aka Discretion. As an aspiriant, you’re not supposed to ask those questions. Whether you’re asking at random, or if you’re asking someone who you’re extremely tight with, those kind of questions can get you blacklisted in Greek Life. You can be an informant for all we know. But I digress. Point is, no one is ever sure.

And YES, she could have stopped at anytime. And she did. At 5 damn months. She was in a “Catch 22” type of situation. She was damned if she stayed, and damned if she left. Yes, she wanted to stay on line to tough it out with her “sisters”. She wanted a chance to show loyalty to her future beloved organization. She gave into the pressure of staying in a situation that wasn’t conducive to her physical or mental health in order to avoid the stigma of being “weak”. That is, until she said enough was enough.

How long do we stay in situations that drain us physically, mentally, emotionally or spiritually all for the mere hope that things will turn out for the best? It happens to the best of us. It’s like people who are in disharmonious relationships. Why would you stay in a relationship that doesn’t feel right for the hope of it getting better once you marry? Greek life is like a marriage. We make a life-long commitment. When we’re dating (checking out the Greek scene), everyone is on their best behavior. But it isn’t until we start to date (pledging) that we truly evaluate ourselves and our decision to go all the way. Some of the relationships are as great as they seem. Other times, they’re about as triflin as Badu’s boyfriend in Tyrone. But we don’t absolutely know until we’re in it. This situation isn’t any different.

>GALLERY: 28 Rare Pictures Of What Pledging A Black Greek Org Looked Like Back In The Day<

Everyone has been tempted to drop. EVERYONE. And if you say that you haven’t, you’re a bold face lie. And MOST of us were all “grown ass adults” when we made the commitment to pledge. Some adults chose to walk away. It wasn’t for them. And that’s fine. Others decided to stay and endure, regardless of  warranted or ruthlessly pointless actions. You made your decision. And that’s fine. We all justify our decisions differently. It’s our right to do so. However, it is not okay to ostrasize someone for making a decision they felt was best for them at the time. For those of you who have had people drop, didn’t you still make it? Yes, you did. Was it harder? Yes. But you still made it, and that’s ALL that matters. Your will power to prevail is not contingent upon if a person leaves or not, in Greek life and in the “Real World”.  So let’s stop framing it as such. Respect their decision, finish your process and let those individuals live in peace.

“She’s exaggerating. I pledged. It stressed me out, and I didn’t get PTSD.”

Ahem…excuse me…excuse me? Are you a certified doctor? Are you absolutely certain this young lady indeed DOES NOT have PTSD? Oh you don’t? Well, then you can kindly have several seats. Thank you!

And another thing. This young lady says she was on line for 5 months. Do you really think she had time to rehash all 5 months of hell, just for you? She only recapped 2 events out of several. Therefore, you have no room to make conclusions about how hard or lax her pledging process was. You don’t know the account of the events. You just don’t. Whether she refrained to explain them due to time, painful recollection or to protect the organization by practicing discernment, it doesn’t matter. You don’t know much, so stop comparing.

So many times, we get caught in these “Set Matches” were we compare our pledge experiences to the next person in hopes to prove how MADE we are. And for what?! For bravado respect? We should respect each other for knowing where we’re from BUT also for what we have and are doing to progress the organization forward. Some of these stories are fabricated anyway. But that’s neither here nor there. The point is, what really matters is what you are doing for your organization RIGHT NOW! Stop living in your so-called glory days. If you’re not using what you learned in Set to help a young brotha or sistah out, shut up.

AND ANOTHER THING, quit comparing this woman’s experience to military PTSD. PTSD can be caused by a wide range of events. Hundreds of people experience PTSD and they have never been in the military. Men and women who are verbally and physically abused have experience PTSD. Sometimes, our process is just that, but we fail to acknowledge it as so. We make the conscious decision to justify the actions.

I’ve gone down Memory Lane with so many people. After each conversation, it always ends with “It’s the worst fun you’ll never want to have again.” Countless times, people have told me about overzealous prophytes who went ham in Set just because. Folks have given reasons why they would never wish their process on ANYBODY. Some members don’t even talk to certain frat or sorors because of the senseless things they inflicted upon them during Set. Others continue to have bad dreams, anxiety attacks, and even mid-day flashbacks when they come across something or somebody that even slightly reminds them of what they endured during their pledging process. We talk about this stuff ALL the time. That isn’t JUST stress. I believe majority of Greeks in BGLOs have experienced some level of PTSD at some point in time. Small & short-lived or significant & prolonged, depending on your process, you know what it feels like. If you turned out fine, you’re blessed. For others, it’s not so easy. It doesn’t mean they’re necessarily “soft”. It means they process and deal with things differently. Rather than chastizing someone for their coping method, be of service. Tell them what worked for you. Offer practical advice to move ahead.

“She couldn’t handle it, that’s life. What is she complaining about?”

We all know life can be a bish. That’s a given. However, we also know that life is way better when we have people in our corner . All the people who told this young lady to “suck it up”, “deal with it” and “it’s not that bad”, you are a part of a problem that’s becoming growing epidemic. Mental health in the Black community has always been a taboo topic, especially when it comes to matters such as depression, PTSD and suicide. Whether they’re small signs or loud gestures, mental illness is nothing to belittle. When you’re dealing with adverse thoughts of yourself and sharing your experience with others as a form of self-healing, comments like:

don’t help anything. Too many people HAVE died in pursuit of our shields. Families have lost fatally lost sons and daughters because their babies simply couldn’t “make the cut”. When someone drops, the backlash from our student bodies can be so harsh, it would make anyone go into hiding. People are taunted because they wanted to be happy and safe. They’re being publically humiliated at probates for the sake of a laugh. This, dear friends, is what we call bullying. These actions isolates people and imparts shame. This is why we shell out thousands of dollars for lawsuits, miss out on potential monies from once hopeful aspirants and fail to retain members post graduation because they take their dollars elsewhere. We are perpetuating a huge problem, and majority of the readers failed to see it. We are missing the point of pledging.

Too often, our chapters mistake pledging for hazing. Pledging is when we undergo a trial period before our formal initiation. That trial period consists of series of tests that are meant to teach us:

Deans are supposed to instill these jewels into every person on line. Each Prophyte present is supposed to assist the Dean in performing that act. When these young men and women can not explain to you why these “tests” were important, they have no testament to tell. Their process was pointless. They were hazed; they weren’t pledged, and therefore you are not MADE.

>NPHC PRIDE: The Discussion We’ve Never Had About Black Greekdom And Homophobia<

Our chapters continue to crank out generations of people who pledge their allegiance to power rather than to progress. And is THAT what brotherhood and sisterhood are about? As Christian based, non-profit, community-oriented establishments, we are required to offer dedication, love, respect, honor and assistance to those around us. We are required to display empathy not apathy; encouragement not estrangement.

If we truly aspire to lead like our Founders intended us to, we must remind ourselves why we were created. We must practice the purpose behind our pledge. It’s then, that our aspirant’s allegiance, as well as ours, will mean something.