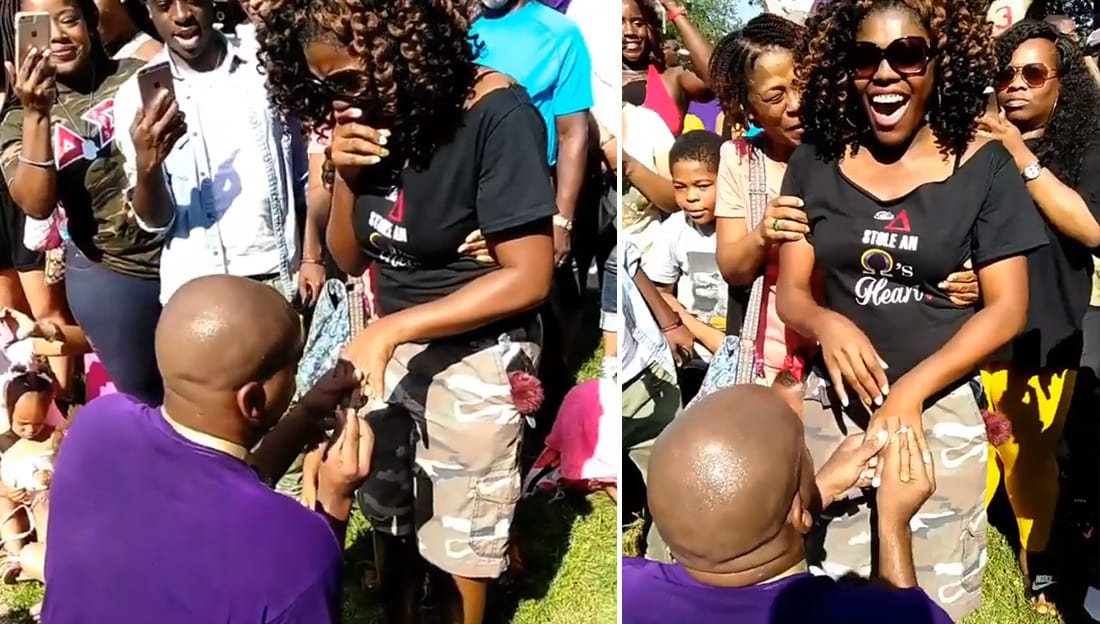 The men of Omega Psi Phi and the women of Delta Sigma Theta have a special bond, so it is no wonder that a recent video of a Que taking a knee at his very own probate to propose to the love of his life is taking the internet by storm.

We at Watch The Yard reached out to the brother in the video to learn more about him, his bride-to-be and why he chose to do the proposal at his probate. His name is Jay he is an initiate of the Sigma Lambda Lambda Chapter of Omega Psi Phi and he works in an architecture firm in downtown Memphis as an architectural designer. He received his bachelors of science at Appalachian State and my Masters of Architecture at the University of Memphis.

Her name is Tomeco and she was initiated into the Delta Sigma Theta, Sorority Inc. at Ole Miss in 2004. She works at the University of Memphis as an enrollment service counselor and received her bachelors in psychology at Ole Miss and her Masters in Higher Learning from Georgia Southern University.

“I wanted it to be special for her,” he told us about the proposal. “Her family (mother, sisters, a few line sisters, neices, nephew, granddaddy) all were in town for it.”

When we asked him if he was more nervous about his probate or proposing, he said that it was definitely taking the knee that worried him.

“I was only worried about proposing honestly. Making her my wife overshadowed the probate but it was amazing to have my fraternity there to back me the way they did.”

“She makes me better in every way possible. I never saw her coming into my life, but I could never imagine her not being in it. I may not be her first anything, but I want to be her last everything.”