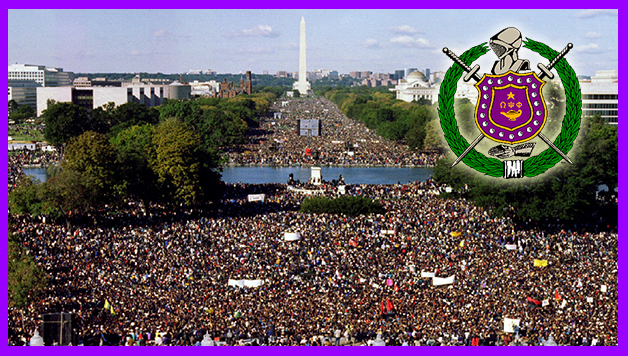 In the true spirit of “Manhood, Scholarship, Perseverance and Uplift” Omega Psi Phi has teamed up with Fathers Inc. to encourage at least 20,000 Black fathers across the nation to sign the HONORABLE man pledge in order to represent the new 21st Century dad at the October 10th, twentieth anniversary celebration of the Justice or Else Million Man March in Washington, D.C.

“The Men of Omega firmly believe that the family nor the community will ever be complete without the contribution of the father or a Black male father figure,” Antonio F. Knox Sr., the Grand Basileus, Omega Psi Phi Fraternity, Inc. said in a statement on BlackNews.com. “The lives of those in our communities will be better when our young Black Men are given the chance to live to their full potential and contribute their talents and skills to society. We are committed to help make this happen.”

Leading up to the march, the Fathers Inc. and its partners, including the men of Omega Psi Phi will encourage at least 20,000 Black fathers across the nation to sign the HONORABLE man pledge on its website (www.millionblackfathers.com)

Men who sign the pledge agree to the following things:

I promise to up hold the values and principles of the HONORABLE man. I take this pledge of HONOR understanding that perfection is a goal, not a reality.  I will practice the charge of the HONORABLE man and work toward being an example of purposeful masculinity for my family and community.