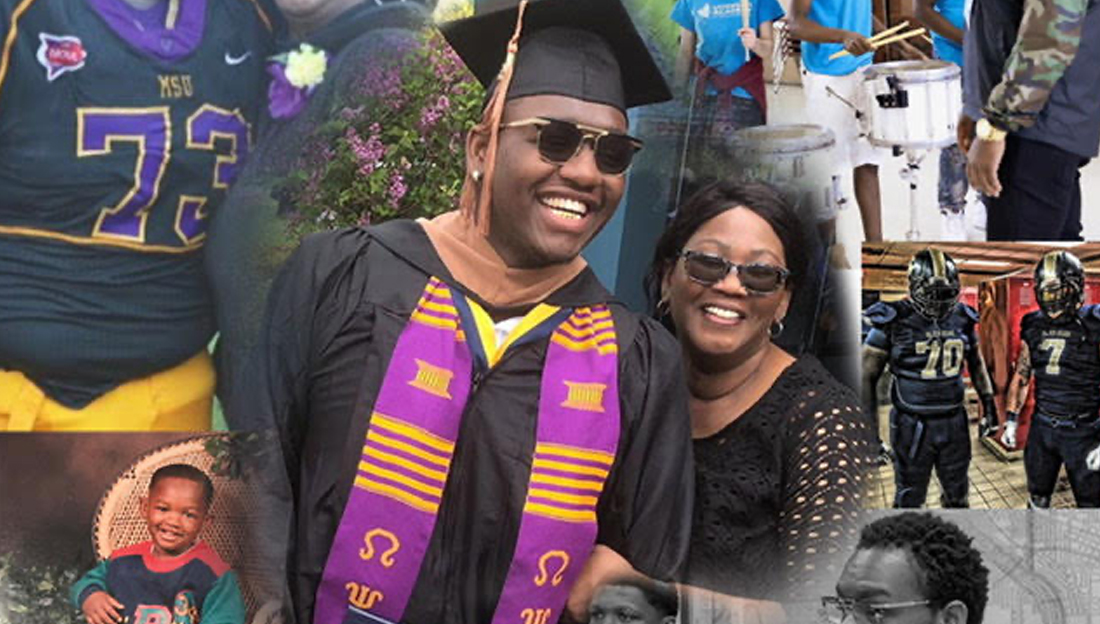 The brothers of Omega Psi Phi Fraternity, Inc. in Minnesota have sprung to action to raise money for their brother, Lawrence “Low” Walker, who was injured in a horrific motor vehicle accident on Monday. In under 24 hours, the chapter has raised over 20,000 dollars.

Low, who is a Spring 2014 initiate of the Xi Chapter of Omega Psi Phi and a former football player for Mankato State University and Concordia University, suffered a car accident on July 5th, 2020, enduring severe physical trauma and leaving him in a critical day-to-day state. The doctors have placed him under sedation as he recovers from brain surgery and has intubated him to help with his breathing. By reducing the burden on the body, they are currently giving his brain an opportunity to heal.

On Thursday, his chapter brothers from the Xi Chapter of Omega Psi Phi teamed up with his mother to create a GoFundme and have since successfully raised thousands of dollars for their brother.

“The GoFundMe was put together to help Lawrence “Low” Walker’s Mother and his entire family as they rally around him physically and spiritually,” his line brother Cordell Smith told Watch The Yard in an interview.”100% of the funds raised will go to Low and his family to support ongoing costs and expenses related to his long road to recovery.”

Since starting the GoFundMe a day ago, the chapter has raised over $20,000 to support their brother. While this may be surprising to some, it is not a surprise to the brothers and the Black community in Minnesota who have a strong bond.

“I am not surprised by the outpouring of support at all. Certain people in life have the innate ability to positively impact everyone they come into contact with in an everlasting way and Low always had that rare ability. The amount of support is commensurate to the love and dedication Low gives to so many people, communities, and his family,” his line brother stated.

“I’m happy to see such an outpouring of support for my brother, I know that if it was me in his position instead, [Low] would be doing everything that he could to make sure that my family and I were okay,” his dean, Donald Wilhite told Watch The Yard. “That’s just the type of person that he is, Low would give you his last if he knew you needed it. I’m hoping that our community will continue to rally around him and his family and give him that same type of support as he continues to fight for his life.”

Donations have been pouring in from throughout Minnesota and from across the nation.

The members other local Divine 9 orgs have made donations from their chapters as well.

“Here at the University of Minnesota, the NPHC is a tight knit community. We the brothers of Psi Chapter of Kappa Alpha Psi wanted to support our brothers of the Xi Chapter of Omega Psi Phi and Low’s family. We pray and wish for a speedy recovery and that the NPHC continues to support each other and Low during this difficult time,” Samson Ghirmai the Polemarch of the undergraduate chapter of Kappa Alpha Psi a the University of Minnesota stated about his chapter’s donation.

It is still unclear how long his recovery will take, but Low is expected to be in the hospital a minimum of 4-7 months.

“Economic times are hard for so many, but going through tragedy amidst these times is not what we want Low’s mother or family to worry about. We will be there to pick my brother up in any way in life and right now this is the support he and his family need,” his line brother Cordell Smith stated.

“Lawrence has been an inspiration to me and our family since the day he was born. He is a big guy because he loves big, lives big and wants big things for everyone in his life,” his mother told Watch The Yard. “This entire situation has been humbling to us. We want to thank everyone for your prayers, well wishes and financial blessings. We trust God first and foremost and know God is a healer and his mercy and grace endures forever. We have all the confidence in the world that Lawrence is going to return to us 100% healthy, 10 toes down!!”

We at Watch The Yard would like to commend the brothers of Omega Psi Phi in Minnesota and the NPHC there as a whole for springing to action to help this brother. This kind of community support in hard times is what Black greekdom is all about.