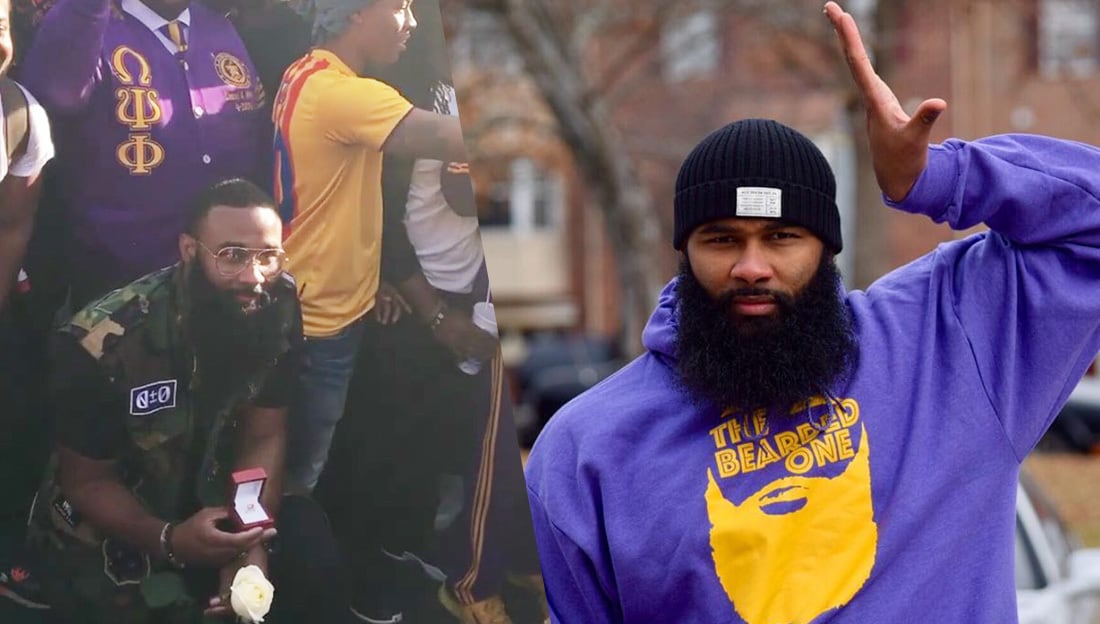 This weekend Watch The Yard posted a video of a brother of Omega Psi Phi getting on a knee and asking his girlfriend to marry him at Howard University’s Homecoming. The video went viral and was seen by over 100,000 people in less than 8 hours on the Watch The Yard Instagram account with people from all across the country posting well wishes and celebrating the newly engaged couple.

We at Watch The Yard reached out to the brother in the video, Keith Pough, a native of Neeses, SC who was initiated into the Alpha Chapter of Omega Psi Phi in the Spring of 2010 at Howard University and currently works as a sports performance specialist & personal trainer.  We wanted to know more about the viral video, the proposal and the couple.

What is her name? What does she do?

Boss Lady’s name is Kara Adams, (no Greek affiliation). She’s the manager of Guest Experience with the Washington’s Nationals

Where did both of you go to school and when did you graduate?

We both attended Howard University, she graduated in 2010 and I graduated 2012.

How did you come up with the idea to propose at Howard’s homecoming?

In striving to do something that accentuated the birthplace of our friendship and love, I felt like I could finesse our Homecoming into a big surprise engagement. Still overwhelmed at the level at which the proposal went viral but I sincerely wanted to have a great number of folks around who love and support us. The people who knew us when we were just friends. The people who saw our growth and didn’t fault us for progressively changing and evolving. I anticipated on her not being aware of her surroundings, because it’s Homecoming and it wouldn’t be odd to see a familiar face. But with a number of distractions causing slight confusion, I calculated everything just right except for her actually being there when I thought she would.

Why do was it important for you to propose at homecoming with your brothers present?

Throughout my matriculation I’ve been grateful to secure a great number of brothers and friends, plus the positive imagery of Black love and Black men supporting one another. My fraternity and chapter bruhs, both young and old, and a number of my former teammates who were present, we share a bond and friendship that is indescribable. We are truly friends who should and will share all things both temporal and eternal. I’m grateful and humbled to know those men and which is more, call them friends.

What is the significance of the yellow flowers?

You have gone viral on Watch The Yard’s Instagram with over 100,000 views in less than 10 hours. People are reaching out and commenting the nicest things. What does it feel like to be celebrated by the Black greek community?

Which is insane…. it’s surreal but it’s also empowering and inspiring. For people who don’t know you and probably will never meet you in all of their existence, to empower, encourage, celebrate and support black love is an ethereal experience.

Aside from the 2.5 seconds when I was informed she arriving to the location, I was rather groovy.

What is your advice for other men out their who want to take the next step in their lives into marriage?

I originally had a deep, philosophical like response but “Just Do It” like Nike. Given of course she’s the woman you want to carry, raise, teach, and nurture your children. We as men know how we want and if we want to marry you or not ladies. Apply pressure, fellas don’t wait until it’s too late and ladies don’t wait forever. Women are abundant and dynamic in a variety of shades, shapes, flavors, and style but finding a woman that ignites your soul, keeps you focused, and speaks to the king in you is rare now days. If you find a women that does please govern yourself accordingly.