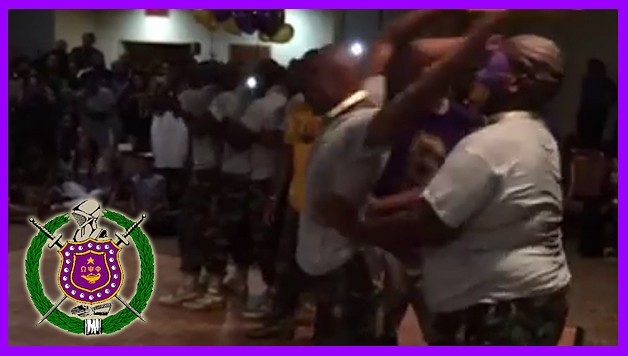 On Saturday Anthony “Fresh” Taylor QKA Dare Devil from Brunswick, GA probated as a charter member of Omega Psi Phi at Armstrong State University and had one of the most memorable probates of 2015. Anthony who went blind in high school, did a whole probate including hopping and SET IT OWT.

Yesterday a video was uploaded to Facebook by Eric Lewis and it has since received over 87,000 views. This is how Eric described the probate:

“This past Saturday was by far the most enjoyable moment I’ve had of being a brother of Omega Psi Phi Fraternity Inc. I had the privilege of watching a blind guy probate. He was apart of the first ever charter line at Armstrong State University. Anthony “Fresh” Taylor QKA Dare Devil from Brunswick, GA went blind in HS. Started losing his eyesight in July and it was gone by October. But yet he had the strong will to leave home, enroll in college and EARNED his way into my fraternity. As I watched him practice before the show I was amazed at how he was in unison with the rest of his line brothers. I spoke with his DP Chris Squared Johnson and he told me he showed him around his house once and he caught on from there. Said he hadn’t used his walking stick in about a month. He told me they taught Fresh how to hop by getting on his line brother back and mimicking his movements. I was like its no way this dude could be blind. During the probate his shoulder popped outta place. He went to the back popped it in place and continued the show in pain. We had to tell him to chill a few times bc he was so amped up lol. This young man made me thankful for the small things and also for my ability to see!! To see a man come from where he came from without giving up made me renew my enthusiasm. Many have tried to join this fraternity but failed. Thru all the blood, sweet, & tears he persevered!! Congrats on conquering your goals and becoming a member of this tough fraternity!!”