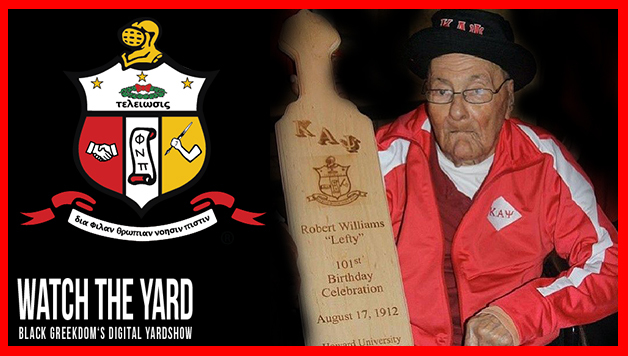 It is with great sadness that we inform you that Brother Robert L. Williams, the oldest living member of Kappa Alpha Psi, who just days ago, we wrote a story about regarding his 103rd birthday, passed away on Thursday.

Brother Williams passed away and entered Chapter Invisible Thursday afternoon(August 20, 2015) at 3:50 pm. This was just 3 days after celebrating his 103rd birthday.

Brother Williams who was also known as “Lefty” turned 103 on August 17th making him the oldest living member of Kappa Alpha Psi Fraternity Inc. He was born in 1912 just a year after his beloved fraternity was founded and was alive during both WWI and WWII.

Brother Williams crossed the burning sands in the 1930s and was initiated at Howard University’s Xi Chapter on November 20, 1931.

Age did not stop Brother Williams all the way up until his death, he was a Life Member KAΨ and was an active member with the Los Angeles (CA) Alumni Chapter.

We at WatchTheYard would like to send our regards to his friends, family, and fraternity. Please comment below with any memories you have of Lefty.