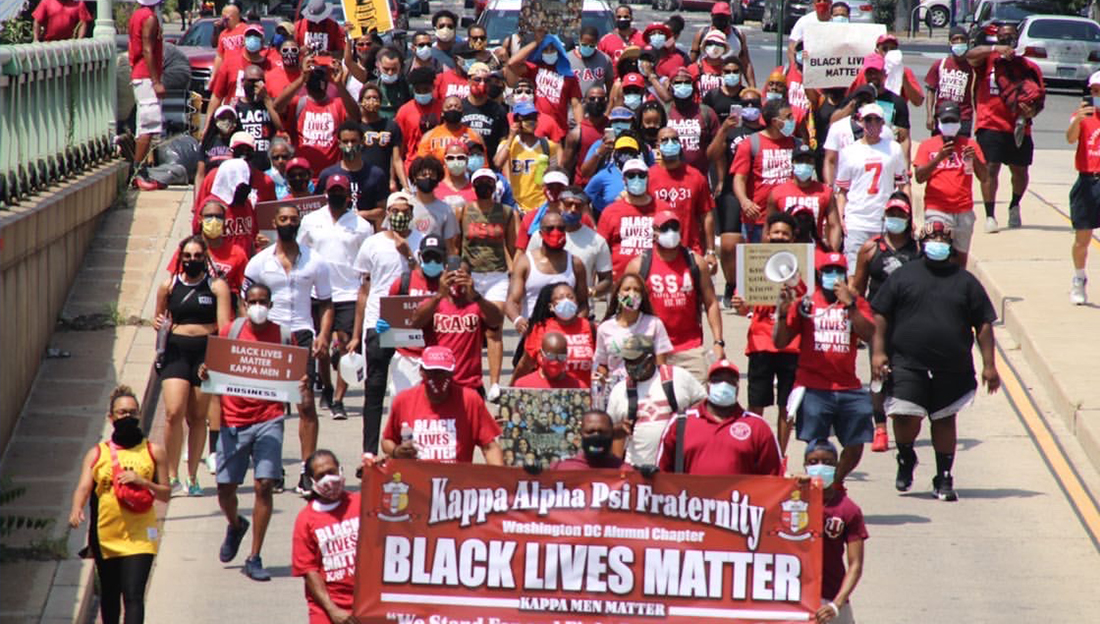 On Sunday, the Washington (DC) Alumni Chapter of Kappa Alpha Psi Fraternity, Inc. led a Black Lives Matter march that was attended by several other Black fraternities and sororities.

The rally which started at 12:30pm in front of the Historic Kappa House located at 1708 S St. NW Washington, DC 20017 was followed by a march to Black Lives Matter Plaza where a brief program was held featuring guest speak Rev. Dr. Howard-John Wesley of the Historic Alfred Street Baptist Church of Alexandria, VA.

“This march was important because this was an opportunity for brothers of Kappa Alpha Psi Fraternity, Inc. to show our collective support to the Black Lives Matter Movement,” Gordon-Andrew Fletcher, Esq., the Chairman of the Black Lives Matter Committee for the Washington, DC Alumni Chapter of Kappa Alpha Psi told Watch The Yard in an email. “Black Greek Organizations must stand up during times like this and show our strength in numbers. If we do not stand up during times of social justice such as now, then we do not need to present in 2020. I am proud of what my chapter did yesterday. “

“We believe that Black Greek Lettered Organizations must stand up and show solidarity as we stand in support of Black men, women and children throughout our great nation. This movement is about Black Lives, Black Culture and Black Greek Lettered Organizations such as Kappa Alpha Psi Fraternity, Inc. which are an integral part of Black Culture in American History,” the chapter stated in a press release.

According to the chapter, following Sunday’s March, Kappa members in the DMV plan to aggressively initiate its voter registration drive. Members of the Washington, DC Alumni Chapter plan to engaging 15 high schools throughout the District of Columbia to encourage, educate, and register high school students to vote in the November election.