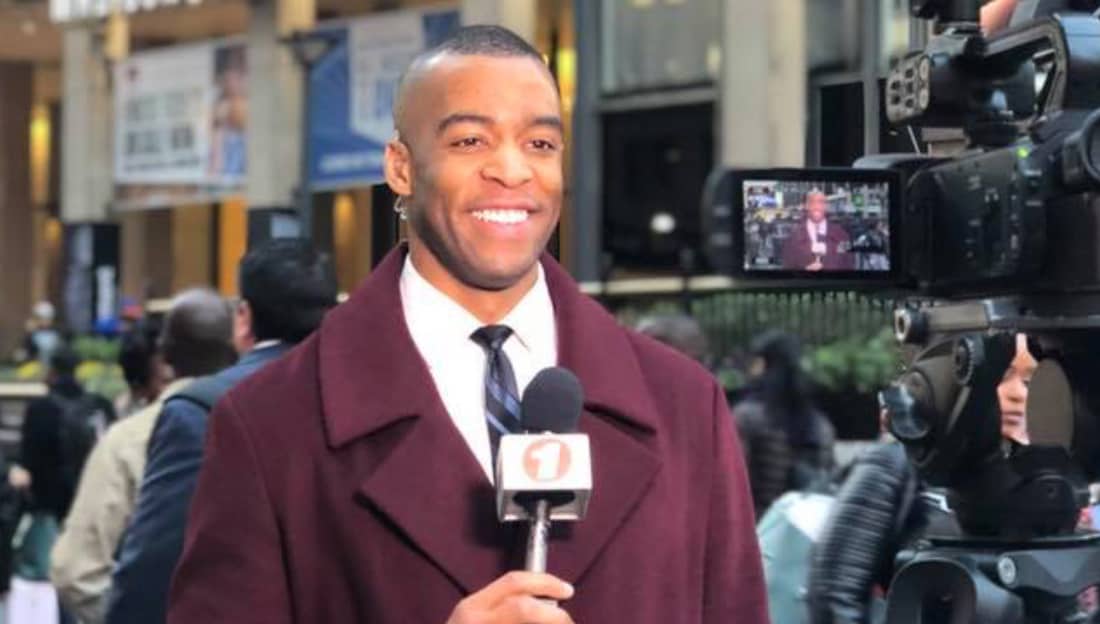 In an effort to highlight the on-air journalists who are members of Black fraternities and sororities across the nation, we at Watch The Yard reached out to Justin Walters, who works as a sports director/reporter for WRNN-TV/Fios1 News covering the Greater NYC Area for an exclusive interview.

Walters is Spring 2010 initiate of the Delta Eta Chapter of Kappa Alpha Psi at the University of Pennsylvania and a graduate of LaSalle University where he majored in Broadcast Journalism. He is an experienced reporter, has worked in the journalism for 7 years and can be seen on television covering local news and sports.

We interviewed him about his work, his fraternity and tips for undergrads on how to succeed in the field of journalism.

What does your job currently entail?

It honestly depends what day of the week or season we’re in. My daily duties change frequently. One day I could be reporting live from a Giants/Jets football game. The next day I might be in studio delivering news from the anchor desk. In addition to appearing on camera, I also have to write, edit and occasionally shoot some of my own content. Yes, I’m in the #1 media market and I still every now and then have to do what we in the TV business refer to as “one-man banding.” Oh and did I mention, I have to monitor social media frequently. There’s a laundry list of duties that viewers don’t realize go into my job. My job is unique, but I wouldn’t trade it for any other profession. I get to talk about sports for a living. 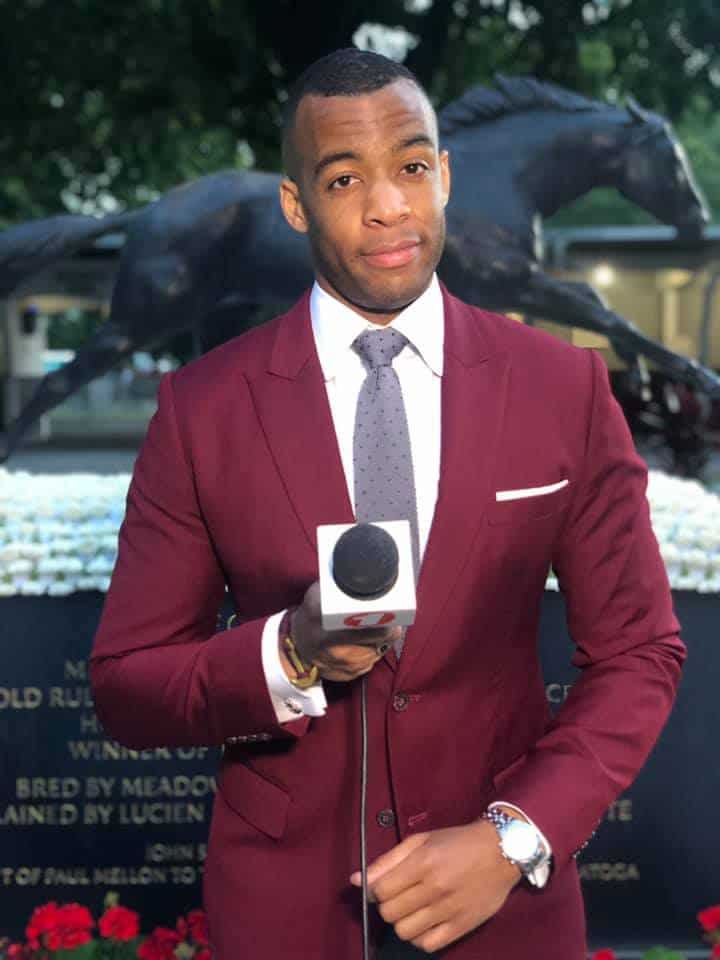 When did you know that you wanted to be a journalist and how did you get started?

My story isn’t unique. I wanted to be on camera from an early age. As a kid, I did fake sportscasts and watched ESPN all day. My studio was the living room and I spoke to an audience of pillows. One of the best decisions I did to jump-start my journalism career was joining the National Association of Black Journalists and attending their annual convention. My first conference in 2011 was overwhelming. I picked the brains of so many journalists and attended some greats panels/workshops. Whether you want to find a mentor or sharpen your craft, there are numerous benefits to being a member of NABJ. I would implore every journalist to attend the conference at least once.

Can you give us a quick rundown of your career timeline?

Upon graduation, I accepted an opportunity to work for NBC as an affiliate producer during the 2012 London Olympics. Following that role, I moved to Philadelphia to work as an associate producer and production assistant for NBC Sports. When shows weren’t airing, I “snuck” into the studio to work on my demo. Having the NBC logo (at the time it was Comcast SportsNet) on my reel caught the attention of more News Directors, which lead to me accepting a Sports Director job in Jackson, TN (Market 176) in July 2013. It was initially scary moving outside of my comfort zone, but my leap of faith paid dividends nearly three years later. In February 2016, I joined WRNN/FiOS1 as a Sports Anchor in the No. 1 market (New York, NY). This platform has allowed me to cover some of the most storied sports franchises, where my passion for writing and storytelling have served me well. 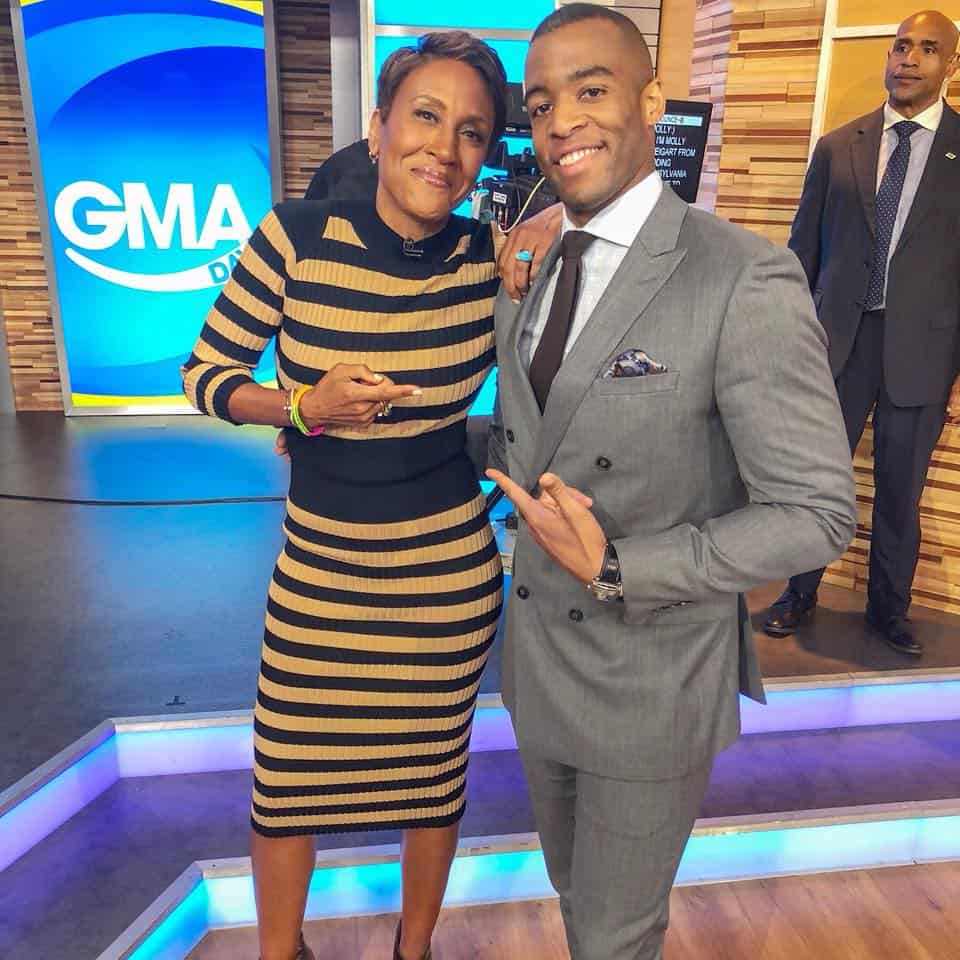 What made you first interested in joining your fraternity/sorority?

To be completely honest, the only reason I wanted to be a Kappa was to shimmy. JUST KIDDING. I initially had no interest in Greek Life at La Salle. I stumbled into an Kappa Alpha Psi informational meeting at the University of Pennsylvania and left galvanized.

I was impressed to see a group of brothers who were challenging each other to reach their full potential and interning at the top companies in their respective industry. My only goal at the meeting was to make some new connections. I ended up walking away with brothers for life.

As you’ve matured in your career and become successful, looking back, how do you think joining a Black fraternity/sorority has contributed to where you are now?

It created a tight circle of kings that could provide guidance and support as well as constructive criticism. My fraternity brothers aren’t afraid with being honest with me. As much as I appreciate them uplifting me, I am equally thankful for them keeping it “100” and holding me accountable.

From your own experience, what are some skills you think undergrads or recent grads should pick up in order to prepare themselves to be successful journalists?

The two skills I think a lot of younger journalists are lacking are good writing and attention to detail. Both are equally important. The small things add up. Grammar and punctuation might sound rudimentary, but shouldn’t be ignored. Whether you want to be a print or television journalist, you need to know how to write. 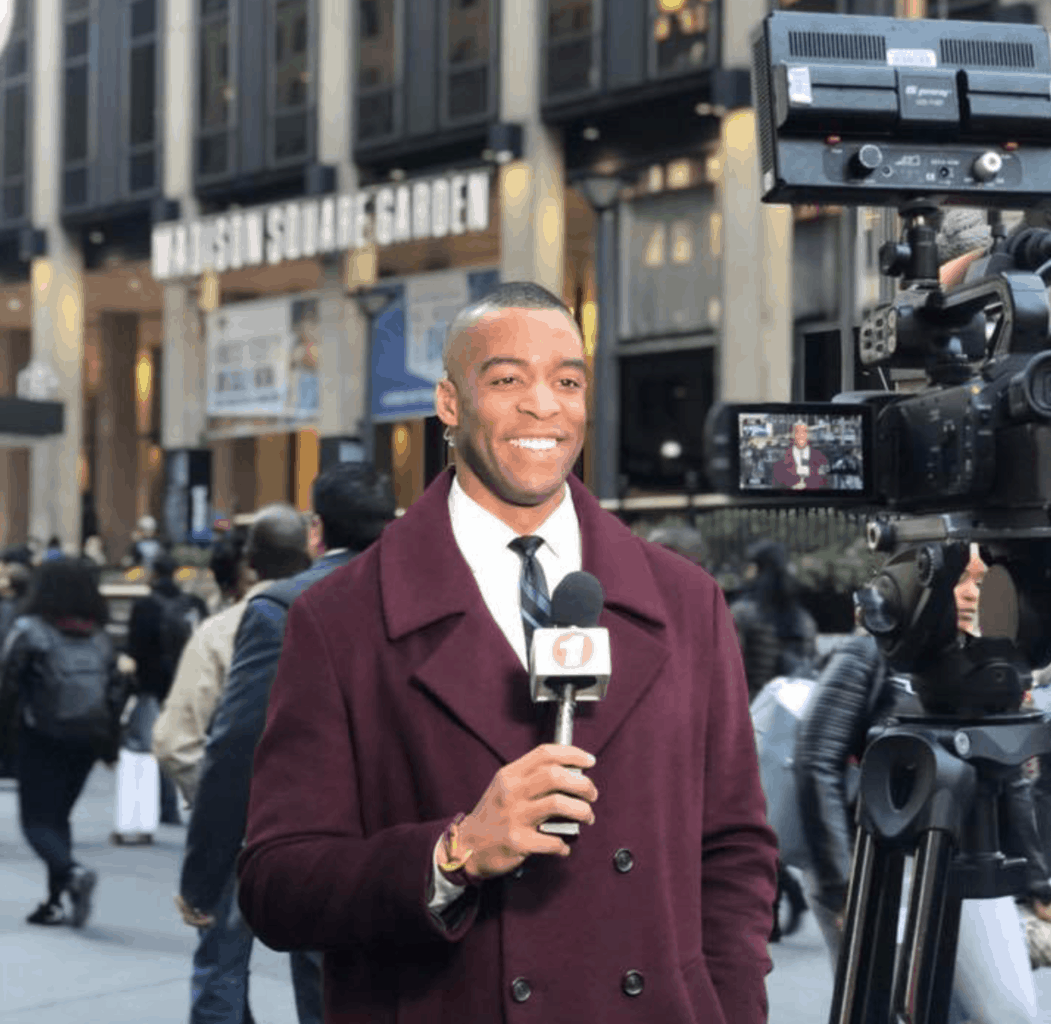 What accomplishment are you most proud of in your career so far?

That’s a tough one, but I would lean towards being a daily positive example for young black men. Sorry if you were expecting something more tangible. I don’t need to bore anyone on the image and plight of black men. There are too many times at work that I vaguely fit the description on the police scanner. If at least one young black man tunes into my sportscast and feels inspired to change his life, then my job is done. Television isn’t just an outlet for me to showcase my storytelling. It’s also a channel to show young men they can aspire to be more.

Why do you think Watch The Yard is important?

Greeks and non-Greeks need a credible platform that is shining a light on black accomplishments in school and after graduation. Watch the Yard does that and a lot more. If we don’t promote our leaders and trailblazers, who will? 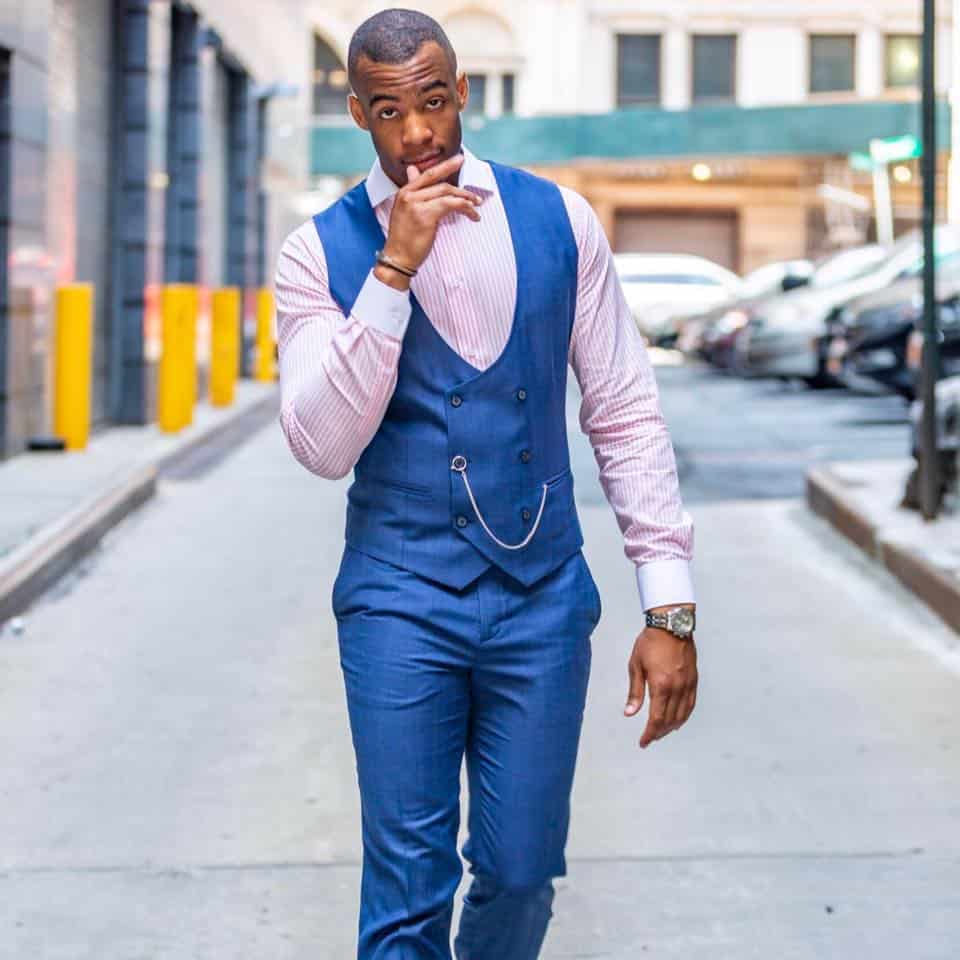 What is your favorite thing about your job?

The most enjoyable part of my job is I found something I really do love to do. I wake up and get excited every day because I get to cover some of the most storied franchises in my hometown of New York. That’s a blessing. I have a lot of friends that are still unsure if their current profession is the right one. I don’t have to worry about that. I believe God gave me the gift of gab and that television is my greater calling.

What can black greeks who are established in journalism careers do to help the next generation?

Reach back! No one got to where there are by themselves. There is always an individual or village of people that have supported someone to reach their full potential. While I personally still think I am just scratching the surface of what I want to do in this industry, I do realize that my experiences and trials can help someone else. The journalism business tests your mental makeup consistently. Viewers only see the finished product. The dark days and moments of doubt that many journalists deal with aren’t made public. When these flashes of fear occur, it’s important to have a mentor to lean on. 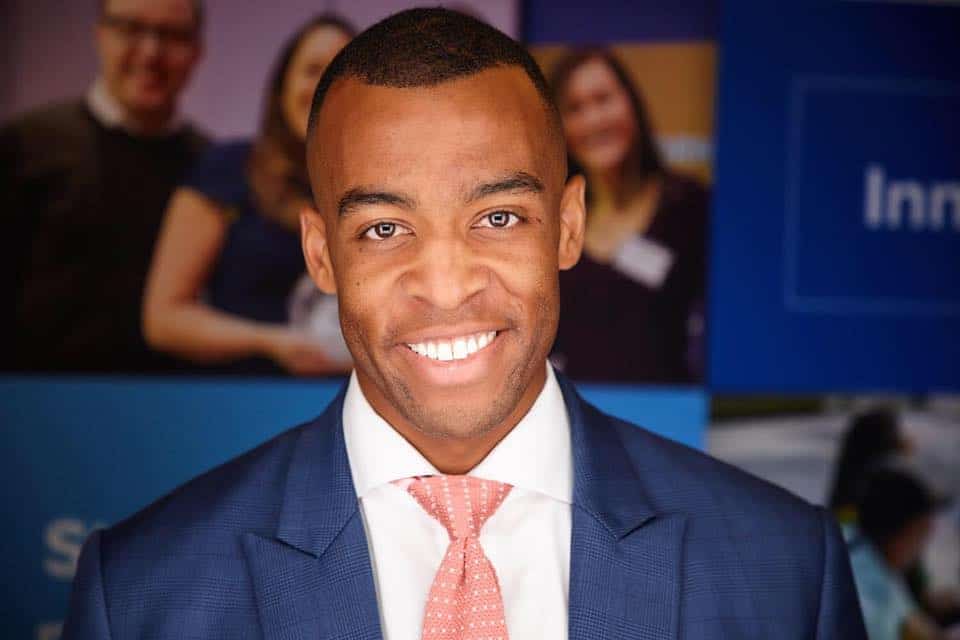