Not even Kerry Washington can handle those irresistible Nupes! Did you know that her husband, NFL Star Nnamdi Asomugha is a member of Kappa Alpha Psi?

It is true, the Scandal star secretly tied the knot with Nnamdi Asomugha in June 24, 2013 and have since had a daughter together. They are currently awaiting baby number two!

Asomugha was born in 1981 to Nigerian Igbo parents in Lafayette, Louisiana. For college he attended the University of California, Berkeley, where he played for the California Golden Bears football team and crossed Kappa Alpha Psi’s Gamma Alpha Chapter.

Asomugha was drafted in the first round of the 2003 NFL Draft by the Oakland Raiders and then went on to play for the Philadelphia Eagles and San Francisco 49ers. For many years he was frequently mentioned as one of the best shutdown corners in the NFL.

Nnamdi has also dabbled in the acting world he made his acting debut on The Game and he played the role of Ken Shaw in the season premiere of Friday Night Lights. He has also been featured in skits on The Kroll Show and Will Ferrell’s Funny or Die.

Click on the arrows below to see pictures and videos of Nnamdi and Kerry! 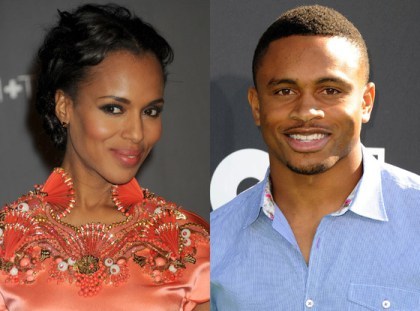