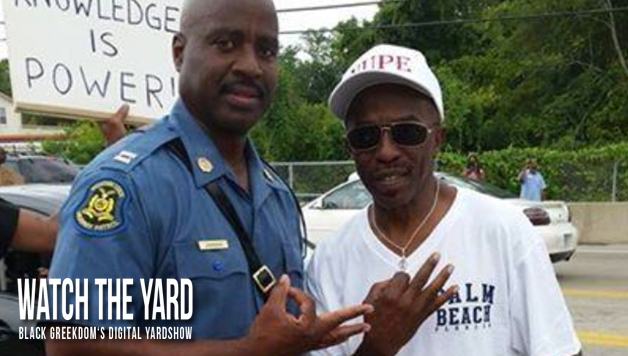 Earlier this week, a picture of Missouri Highway Patrol Captain Ron Johnson standing next to a fellow Kappa Alpha Psi member was taken and posted to CNN’s iReport, claiming that he was flashing gang signs with Blood gang members from the Ferguson, Mo community. 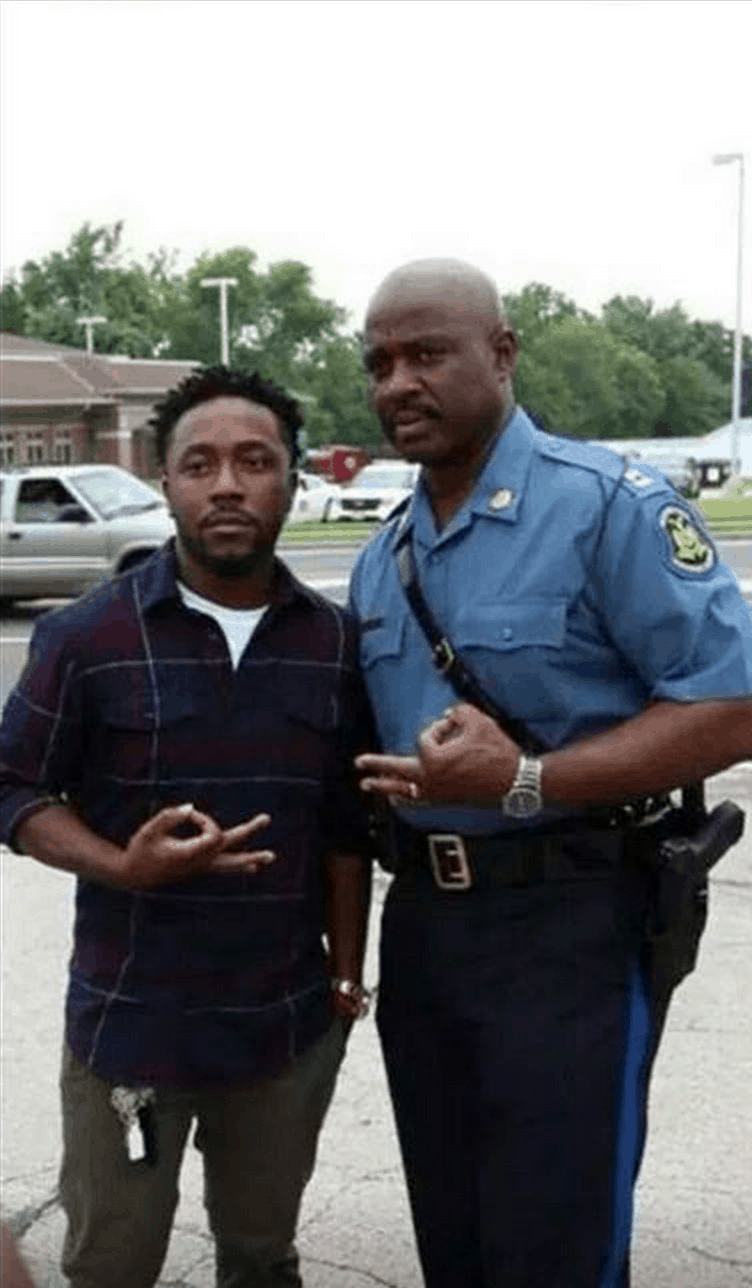 The Washington Post addressed the ridiculousness of this claim today and the report has since been deleted from CNN’s website.

“To reiterate: Capt. Johnson is a member of Kappa Alpha Psi, a black fraternity that was formed in 1911 at Indiana University in Bloomington, and the hand sign you see in the pictures below is a Kappa greeting. The Kappas are part of the Divine Nine or the National Pan-Hellenic Council, the nine historically black fraternities and sororities that include Delta Sigma Theta, Alpha Kappa Alpha, Alpha Phi Alpha, Omega Psi Phi, Phi Beta Sigma, Zeta Phi Beta, Sigma Gamma Rho and Iota Phi Theta, none of which are gangs,” The Washington Post stated in their article debunking the claim.

Capt. Johnson pledged at the Beta Nu Chapter of Kappa Alpha Psi in the spring of 1983, is lifelong resident of the St. Louis area, and a 27-year veteran of the Highway Patrol. He was chosen by Missouri Gov. Jay Nixon to coordinate the law enforcement agencies during the uproar over the Ferguson police response to protests in the days following Michael Brown’s death.

We at WatchTheYard.com believe that no matter how you view the situation involving the police response to the protestors in Ferguson, this demonizing and smearing of someone from our Black and NPHC community by picking pictures that seem most dangerous, puts Captain Johnson in the same category as Mike Brown in a sense. Media outlets have continuously vilified Brown by using pictures that seem the most “thuggish” and paint him in a dangerous manner and now they are doing it to the police officers as well. We agree totally with The Washington Post when they state:

“Given such differences in the perception of a national news event, there’s some glaring cultural illiteracy when the top law enforcement officer installed by the governor of Missouri is being accused of throwing up gang signs. This actually makes Johnson not unlike Brown himself — the publication of a photo of Brown flashing the peace sign, which was also misinterpreted as a gang sign, is what sparked #IfTheyGunnedMeDown. Part of the conversation surrounding Brown’s killing centered on black Americans being treated as foreigners in their own country or, in sociology-speak, being “othered.” Some would say black folks must constantly prove their humanity or, at the very least, explain black American culture — sometimes a comically Sisyphean task. Case in point: having to state that Missouri highway patrol captain Ron Johnson is not a gang member.“

It must be noted that the place where the claim that Captain Johnson has gang affiliation does not come from CNN directly, but rather their iReport site which allows regular people to upload photos and videos from their cellphones and computers.

Check out some of Twitter’s responses to the claim: 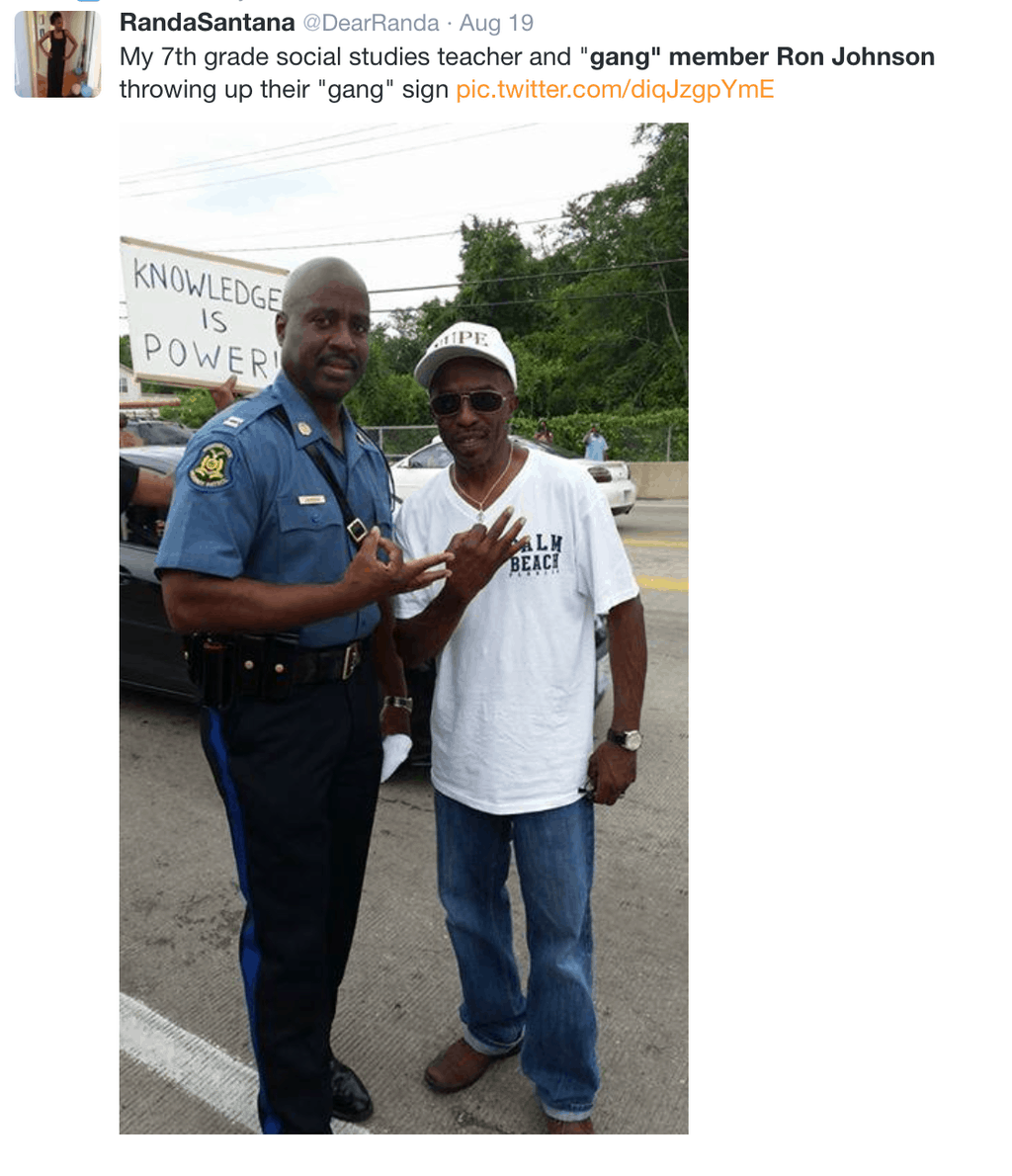 What are your thoughts on the vilification of Blacks by way of mislabeling NPHC fraternities and sororities as gangs? What can we as a community do to change this? Let us know in the comment section below.