Did you know that in the 1850’s a Louisiana scientist claimed to have found a disease called drapetomania which made slaves run away from their masters?

It sounds crazy but it is true. In May, 1851, Dr. Samuel A. Cartwright published a paper entitled, “Report On The Diseases and Physical Peculiarities Of The Negro race” in The New Orleans Medical and Surgical Journal, a reputable scholarly publication, that claimed that black ran away from their masters because of a disease.

Dr. Cartwright claimed to have discovered two new diseases peculiar to Blacks that he believed justified enslavement as a therapeutic necessity for the slaves and as a medical and moral responsibility for their White masters. He claimed that Blacks who fled slavery suffered from drapetomania. In his words:

“A runaway slave is mania mad or crazy. It is unknown to our medical authorities, although its diagnostic symptoms be absconding from service, is well known to our planters and overseers. In noticing a disease that, therefore, is hitherto classed among the long list of maladies that man is subject to, it was necessary to have a new term to express it. The cause in most cases that induces the Negro to run away from service is as much a disease of the mind as any other species of mental alienation, and much more curable as a general rule.”

To further prove his point, Cartwright pointed out that the Bible calls for a slave to be submissive to his master, and by doing so, a healthy slave will have no desire to run away.

“If the white man attempts to oppose the Deity’s will, by trying to make the negro anything else than “the submissive knee-bender” (which the Almighty declared he should be), by trying to raise him to a level with himself, or by putting himself on an equality with the negro; or if he abuses the power which God has given him over his fellow-man, by being cruel to him, or punishing him in anger, or by neglecting to protect him from the wanton abuses of his fellow-servants and all others, or by denying him the usual comforts and necessaries of life, the negro will run away; but if he keeps him in the position that we learn from the Scriptures he was intended to occupy, that is, the position of submission; and if his master or overseer be kind and gracious in his hearing towards him, without condescension, and at the same time ministers to his physical wants, and protects him from abuses, the negro is spell-bound, and cannot run away.”

According to Cartwright, this malady was a result of masters who “made themselves too familiar with [slaves], treating them as equals”.

“If treated kindly, well fed and clothed, with fuel enough to keep a small fire burning all night–separated into families, each family having its own house–not permitted to run about at night to visit their neighbors, to receive visits or use intoxicating liquors, and not overworked or exposed too much to the weather, they are very easily governed–more so than any other people in the world. If any one or more of them, at any time, are inclined to raise their heads to a level with their master or overseer, humanity and their own good requires that they should be punished until they fall into that submissive state which was intended for them to occupy. They have only to be kept in that state, and treated like children to prevent and cure them from running away.”

Cartwright proposed that there was in fact a cure for this runaway slave disease.

“With the advantages of proper medical advice strictly followed, this troublesome practice that many Negroes have of running away can be almost entirely prevented, although the slaves are located on the borders of a free state within a stone’s throw of abolitionists.”

And the cure was even worse than the idea that there was an actual disease that caused human beings to run away from oppressive and violent situations.

Cartwright stated that if a master started to see that a slave was “sulky and dissatisfied without cause” it was a warning sign of imminent flight. His prescription to stop the disease from fully taking over the slave was, as he writes with his very own words, “whipping the devil out of them” as a “preventative measure”.  As a remedy for this “disease,” the doctor made running a physical impossibility by prescribing the removal of both big toes.

Cartwright’s paper was published widely throughout the south but was seen as a joke in the north where satirical articles were written about it. Frederick Law Olmsted, the father of American landscape architecture who is famous for designing Central Park satirically hypothesized that since white indentured servants coming to the Americas had been famous for fleeing their servitude, the supposed disease was actually of white European origin, and had been introduced to Africa by caucasian traders.

But this is not the only disease that Dr. Cartwright who was a self-proclaimed expert on the “maladies of the negro race” had “discovered”. According to his scientific writings, he had also found a mental illness called dysaesthesia aethiopica which made blacks lazy in their work. Dr. Cartwright said that a sign of this illness was a partial insensitivity of the skin and “so great a hebetude of the intellectual faculties, as to be like a person half asleep.”

Cartwright then went on to say that this illness is “much more prevalent among free negroes living in clusters by themselves, than among slaves on our plantations, and attacks only such slaves as live like free negroes in regard to diet, drinks, exercise, etc.”  according to Cartwright, “nearly all [free negroes] are more or less afflicted with it, that have not got some white person to direct and to take care of them.”

Once again, his cure for this “mental illness” was violent and horrible. According to Cartwright, because insensitivity of the skin was one symptom of the disease, the skin needed to be stimulated:

“The best means to stimulate the skin is, first, to have the patient well washed with warm water and soap; then, to anoint it all over in oil, and to slap the oil in with a broad leather strap; then to put the patient to some hard kind of work in the sunshine.”

After the prescribed “course of treatment”, Cartwright said the slave will “look grateful and thankful to the white man whose compulsory power … has restored his sensation and dispelled the mist that clouded his intellect.”

Click on the arrows below to see runaway slave posters from the time. 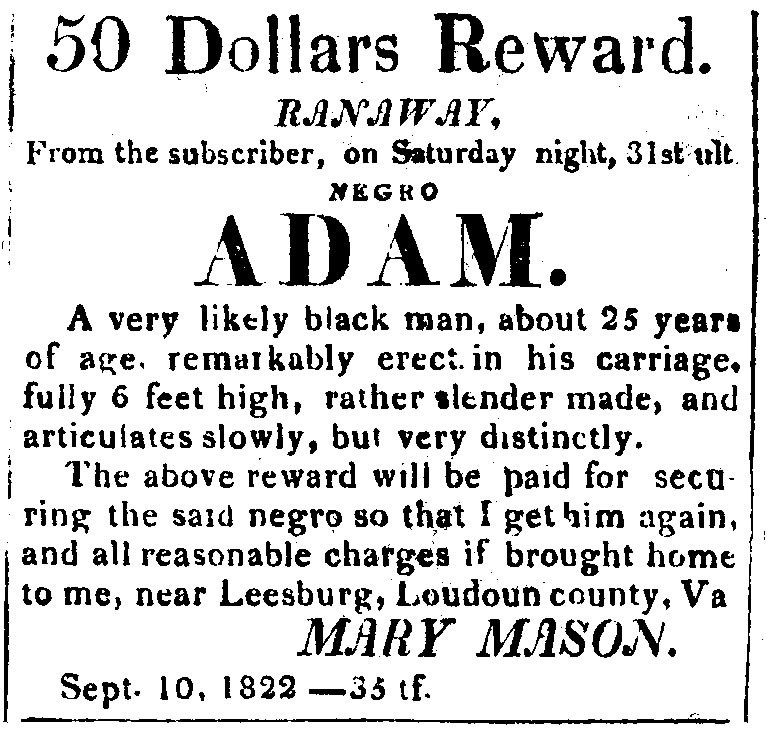 Click on the arrows below to see runaway slave posters from the time.

Prev1 of 18Next
Use your ← → (arrow) keys to browse
1.7K Shares
Share1.7K
Tweet7
Related Topics:2015Black HistoryHistoryslaveryslavesvideo