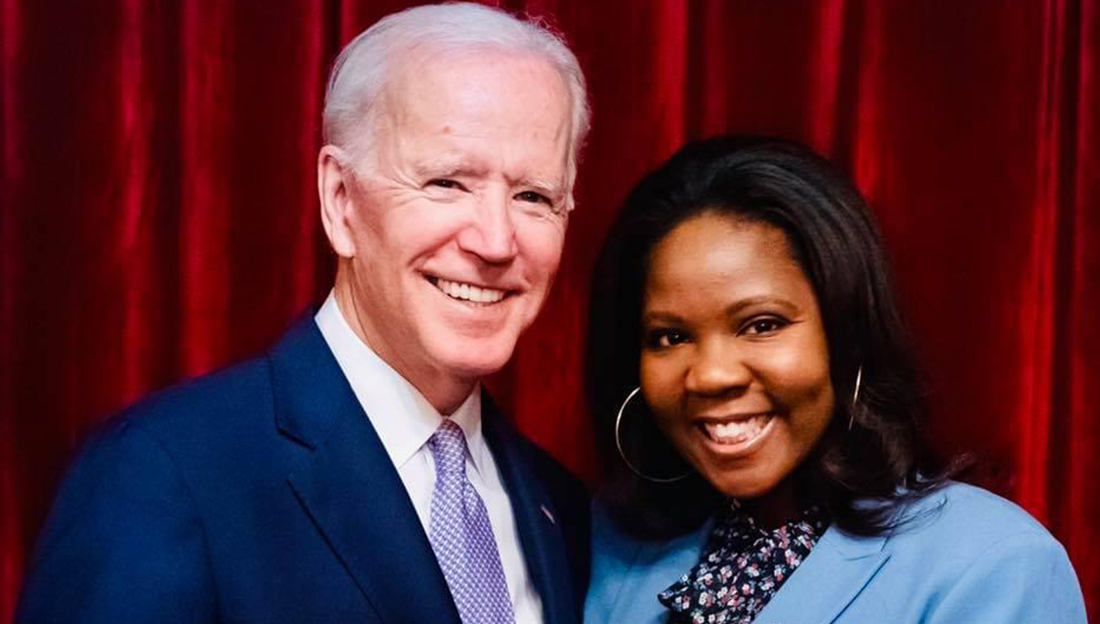 We recently interviewed Adjoa B. Asamoah, the National Advisor for Black Engagement for the Joe Biden campaign, who is a Spring 1997 initiate of the Epsilon Delta Chapter of Delta Sigma Theta at Temple University. Asamoah is currently working in a top leadership role to get Joe Biden and Kamala Harris elected.

We talked to her about her role and how being a member of a Black sorority helped shape her into the person she is today.

What does your position of National Advisor for Black Engagement at the Biden campaign entail?

As the National Advisor for Black Engagement, I work on multiple fronts to meaningfully engage the Black community, ranging from the African Diaspora to the Panhel family. Standing up the TEAM UNITY initiative and the Divine Nine GOTV rally that tens of thousands of D9 members attended (featuring Senator Kamala Harris, with DJ D-Nice and others) are just two examples of the kind of work I do.

My father was born under colonization in what would become Ghana, and retired as an Africana studies and political science professor,. My mother was born in the Jim Crow south, and experienced racism on multiple fronts. Both were civically engaged, and I was born into the movement, with their lived experiences informing my career choices. By the age of nine, I had gone to the birthplace of both parents, and in witnessing Black people struggle in two different countries on two different continents, as unbelievable as I realize it sounds, I declared then I would dedicate my life to moving Black people forward. That has since taken on different forms. While attending Hopkins for high school, I taught African Studies to elementary school students in Summerbridge, testified at the state capital for the first time, and led my first issue campaign–refusing to refer to the school leader as head master. While in college, I opted to return to Ghana as an international student one semester to study African history and gain a better understanding of Kwame Nkrumah’s approach to liberation. While in undergrad at Temple, I challenged the university on plans to gentrify the community, served as (EΔ) chapter president, VP of the NAACP, and Treasurer of the African Student Union, landing myself a university presidential appointment to the University Affirmative Action Committee.

Wanting to understand how we survived enslavement, coped with living under oppression, and even thrive in some cases on multiple fronts, I earned 3 degrees in psychology, focusing on human behavior. I was a practicing therapist and cofounder of a mental health clinic in Philly, and also consulted in education to address the need to create positive school climates and culturally competent approaches to educating students. With a desire to dismantle the school-to-prison-pipeline, I decided to attend GW to do my doctoral work, and like what happens to so many people who encounter DC, I found myself surrounded by problems warranting fixing. I had ideas, and I was vocal. I was tapped to serve as the mayor’s policy advisor managing the “equity” portfolio, subsequently saw a need to mobilize our people around many issues externally, and was ultimately appointed to the Commission on African American Affairs, and I was appointed to the State Title I Committee of Practitioners–where I serve as chair of the 4th consecutive year. I have served as adjunct faculty, teaching African American Psychology: The Psychology of the Black Experience, and with the ability to galvanize people around policies, coupled with an ability to raise money, politicians started asking me to consult for them, and I have leveraged expertise in cultural intelligence and behavioral psychology to create winning campaigns.

As a mover of policy and culture, evidenced by the legislative victories I spearheaded to codify the nation’s first Office on African American Affairs, and introduce and pass the groundbreaking anti-hair discrimination CROWN Act, I mobilize leaders and communities for social change and collective political action.

At this stage, I don’t think there is a typical work day. We’re all hands on deck, mobilizing the base, engaging with voters, connecting with stakeholders, speaking at (virtual) events, strategizing and executing. Yesterday, I was focused on the Panhel GOTV rally, tomorrow, I’m focused on the African Diaspora for Biden-Harris rally. On Sunday, at some point, I’ll likely be speaking with voters, reminding them of their electoral power and the need to VOTE! Leaning in on all fronts is the name of the game!

You are a proud member of Delta Sigma Theta. What made you want to join?

I have never not been about social action or the business of moving Black people forward. That’s precisely who the women of Delta Sigma Theta Sorority, Inc. are and have been, and why I pursued membership. With the first official act of Delta Sigma Theta Sorority essentially being one of protest (Suffrage March) in the nation’s capital, and as a self-identified racial and gender equity champion, the alignment is obvious. Shirley Chisholm, Barbara Jordan, and Fannie Lou Hammer are women whose work I admired prior to pledging, and they remain the inspiration for the work I continue to do. As an African, the “us/our/we” approach reflects a worldview that is consistent culturally, and what makes us so very powerful. Delta Sigma Theta prioritizes political awareness and involvement, and that’s why I proudly honor the legacy of my founders and do this work daily.

As you’ve matured in your career and become, looking back, how do you think joining a Black sorority has prepared you for where you are now?

Joining and being chapter president in undergrad, under the leadership of Past National President (Congresswoman) Marcia Fudge, I was taught to lead boldly and unapologetically. I was taught to work collaboratively and unselfishly. I gained an understanding of how to strategically accomplish goals, and be free from distraction. I learned time management, and how to follow through. Throughout the years, I have mastered being accountable, and understand how my choices impact others. I have an invaluable network as a result of pledging Delta, and in this historical moment, I have been prepared to step up, work tirelessly, and tap into a family that shows up and out, not just each other, but for our community.

I encourage people who want to explore working on a political campaign to volunteer working on a campaign or two to gain an understanding of the culture, and get a mentor who has been in the game for a while.

What is it like working on the campaign team?

It’s really like a family, and like being back on the yard. We stay up late, work a lot, and check on each other. I work daily alongside Trey (Kappa) and we have truly become sister and brother,. We meet multiple times a day, and call each other more than either of us could count. We do talk junk and still find time to laugh, but we hold each down, and that’s worth noting. Campaign life can be challenging, because you have to be laser focused on winning, and those not in the space don’t necessarily understand why you’re MIA, and sometimes miss stuff on the line thread. I’ve worked on a lot of teams, and I appreciate the intentional way we operate like a family.

Why do you think this election is so important?

Aside from the historic nature of Senator Kamala Harris being on the ballot, and the chance to help ensure we not just hope, but actually “help” our D9 sister become Madam Vice President, VP Joe Biden launched his campaign for President by stating “we are in a battle for the soul of America” and it resonated with me. The current administration has failed to acknowledge and properly address the structural failure to protect us from this deadly COVID-19 pandemic. The decision to shift blame and to instead fuel the flames of racial grievance and anti-Black racism have shed light on the devastating economic and health outcomes that disproportionately impact Black people. With so much confusion about so much, one thing is clear, from pandemic to police violence, this status quo cannot stand. This country must change, or face the possibility of irrevocable fracture and irritievable loss of hope. Add to that, the dangers of having racists appointed to bench for a lifetime, and well, the importance of THIS election is clear.

Why do you think Watch The Yard is important to Black college culture?

I think our lived experiences are uniquely dynamic, and must be shared. A platform dedicated to telling our stories is critically important, and must be lifted.

Watch The Yard would like to thank Adjoa B. Asamoah for taking time out of her busy campaign schedule to speak to us about her position.