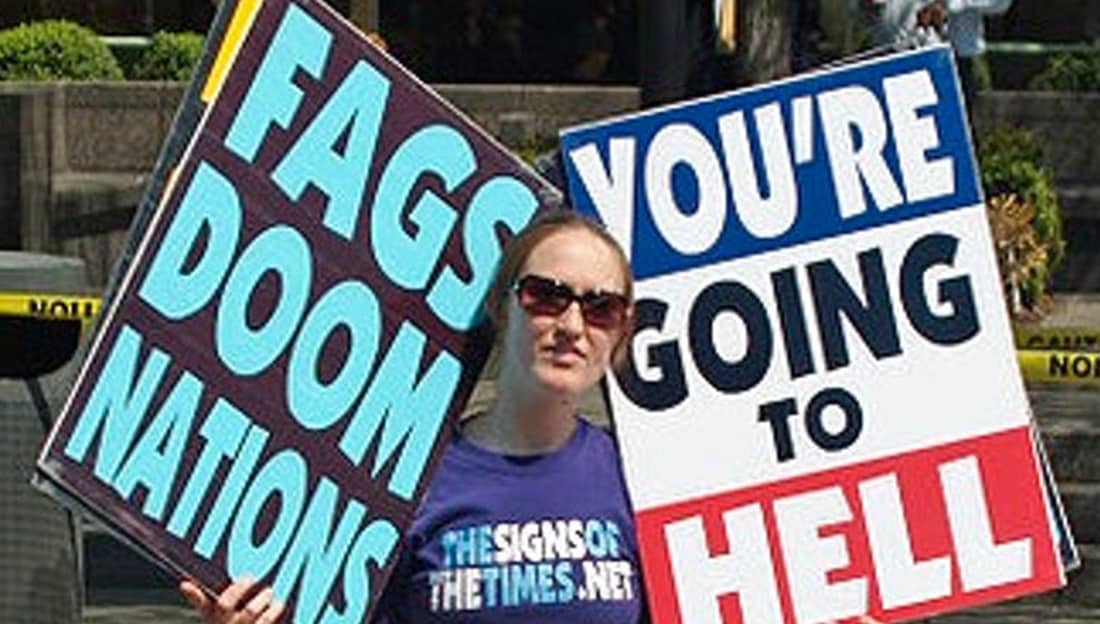 The Westboro Baptist Church has announced plans to protest at the graduation ceremonies of Spelman College, Clark Atlanta University and Morehouse College this week.

The anti-LGBT group which is designated as a hate group by the Southern Poverty Law Center released a press release stating that Spelman College’s “Women’s Research and Resource Center of Spelman, ‘the heart of Spelman’s progressive feminist organizations,’ includes the organization ‘Afrekete,’ which describes itself as ‘an all-inclusive organization that strives to offer a safe, creative, and liberating spaces for students across the entire spectrum of the LGBTQIAPD+ community and their allies.'”

It said that, “more evidence does not seem necessary to demonstrate that this college is being grandly paid to produce perverts who aggressively strive to push others toward proud sin and down the path to hell. Repent!”

The group followed by attacking Morehouse College over its announcement last month that it would start admitting transgender men.

“Morehouse, founded by Baptists, announced in April, 2019, that for 135 years only male students could enroll, but starting in 2020, females, who pretend that they are males, will be welcome. Check the neck! God’s moral law is immutable!” it stated.

They also released this: 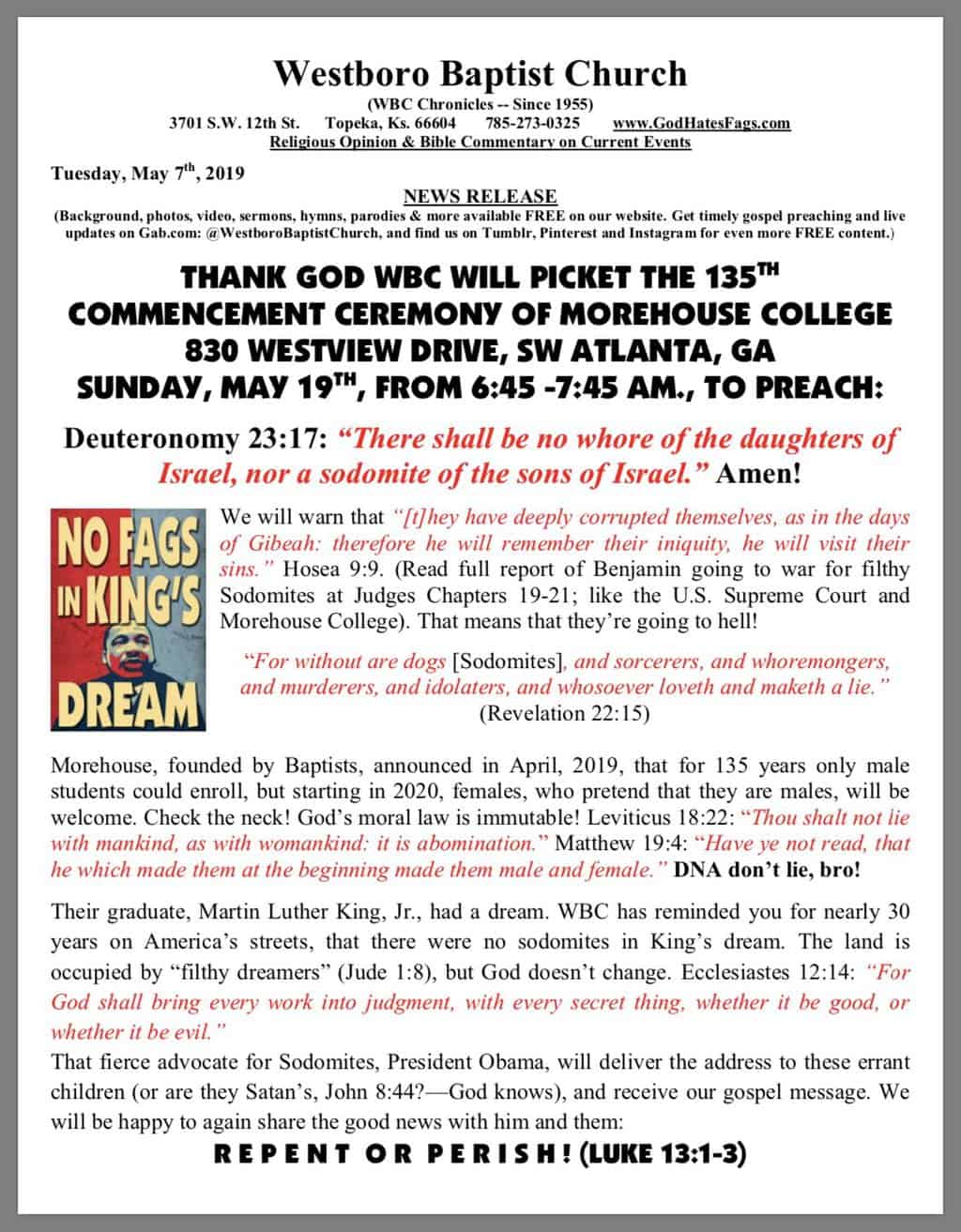 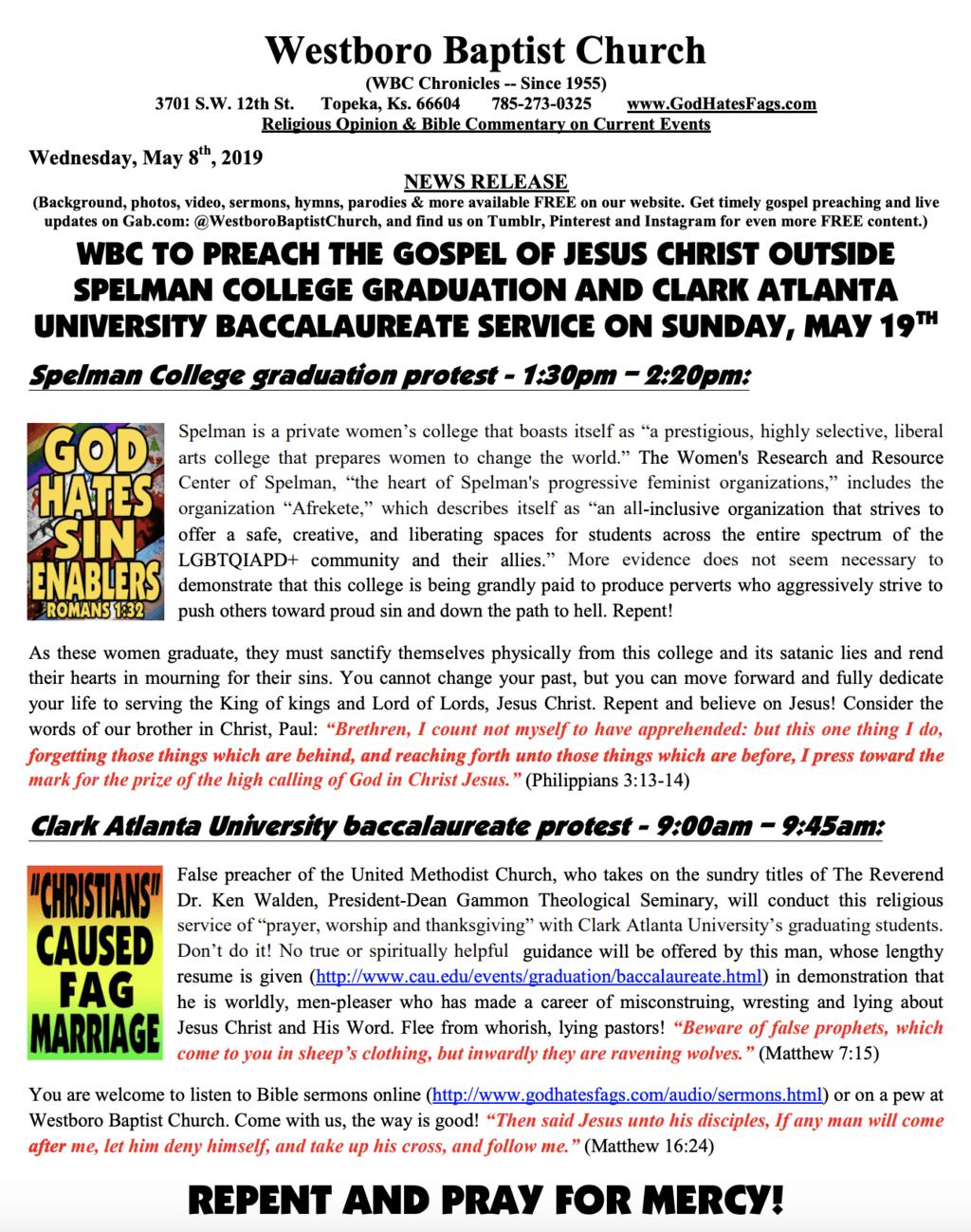 The group attacked Reverend Dr. Ken Walden, the President-Dean of Gammon Theological Seminary is set to do the prayer during Clark Atlanta University’s graduation ceremony.

“No true or spiritually helpful guidance will be offered by this man, whose lengthy resume is given in demonstration that he is worldly, men-pleaser who has made a career of misconstruing, wresting and lying about Jesus Christ and His Word. Flee from whorish, lying pastors!” they stated.

Spelman tweeted that they were aware of the group’s plans to protest and have made safety precautions for those attending the graduation. 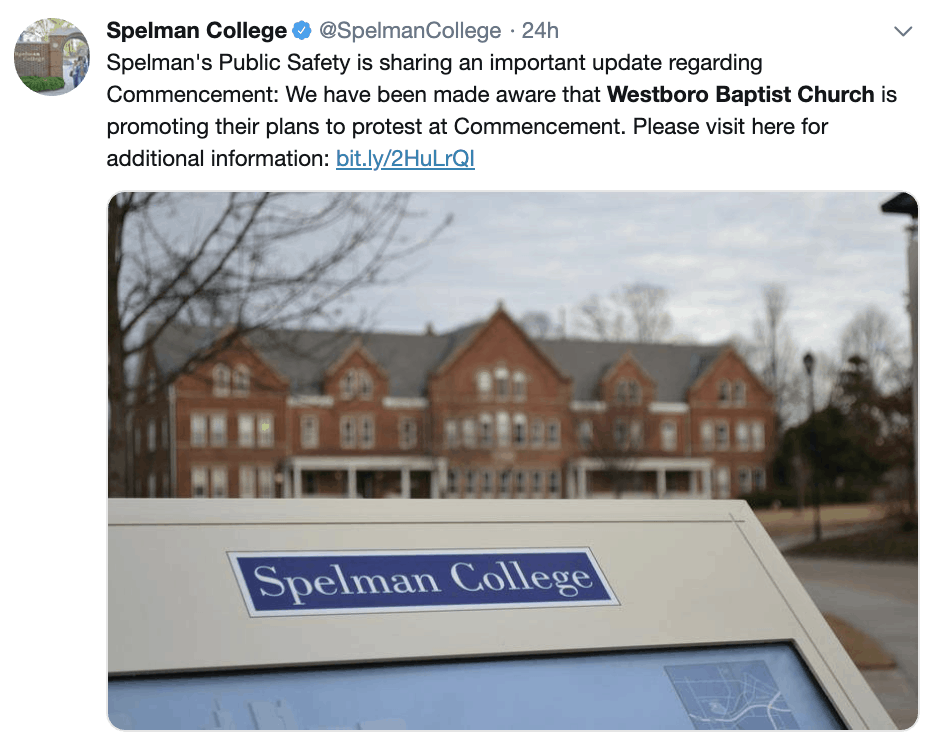 “We will have additional staff on hand to ensure that all events proceed safely and with minimal disruption if any at all,” Steve Bowser, the director of public safety at Spelman stated.

“All faculty, staff and students should carry their Spelman ID to all events. Also, we strongly recommend that all alumnae, guests, and vendors have ID, as there will be additional security screening by campus staff and local law enforcement,” it added.

The Southern Poverty Law Center has dubbed the Westboro Baptist Church “the most obnoxious and rabid hate group in America.”