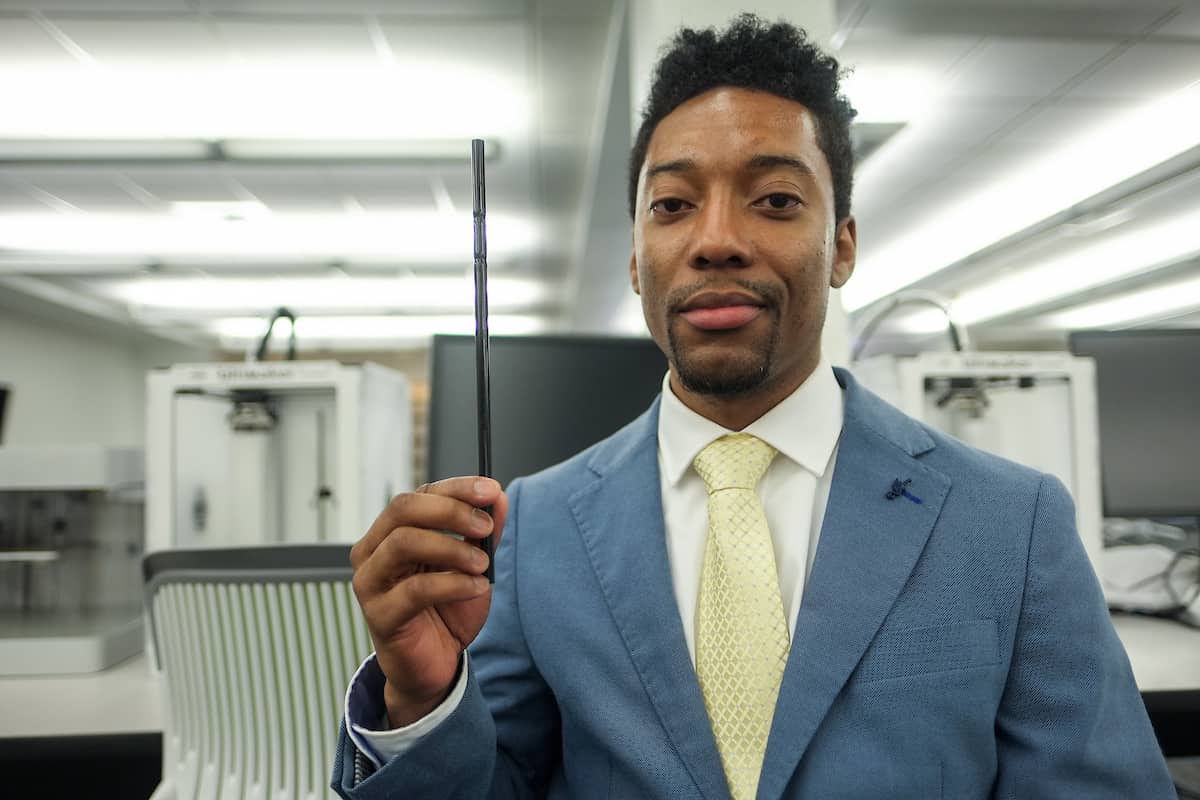 The following press release was sent to Watch The Yard by L.A. Warren from Jackson State University’s University Communications Department.

(JACKSON, Miss.) – The city’s notorious boil-water notices spurred a Jackson State University student to develop an innovative straw that successfully filters lead and other contaminants, and now the world’s largest retailer wants his newly patented device on its store shelves.

In June, LaMonté Pierce earned the patent for his “Cleanstraww,” a thin recyclable device that’s strikingly similar to a regular drinking straw. The material used in development of the product is FDA compliant and has been tested according to guidelines by the U.S. Environmental Protection Agency.

Pierce said the difference between his straw and others on the market such as LifeStraw, which also removes contaminants, is that Cleanstraww eliminates lead, too, and costs a lot less. During the developmental phase, Pierce created Cleanstraww, LLC, secured a few small investors to help with the patent and built a website, www.cleanstraww.com.

Ultimately, his device captured the attention of Walmart, which has offered Pierce a vendor contract. The world’s largest retailer is seeking to supply 4,000 stores with a single box of filtration straws of 10 to 12 units per box.

By Pierce’s calculation, just that small quantity alone could generate total sales of $240,000 – especially with individual straws costing about $5 each and lasting an entire month. He said, “A lot of people spend more than that buying juices and sodas over a 30-day period. One straw can handle 20 gallons of water, and most people don’t drink a gallon of anything through a drinking straw.”

To further help consumers know when to discard the straw, he’s looking at developing an app that would calculate its expiration date based on input from the consumer: date, SKU number and the amount of water consumed.

Because it isn’t as bulky as LifeStraw, Pierce said the device is much more convenient for joggers, hikers and campers to carry. Aside from the price difference, he said his product is much less time-consuming than replacing expensive filters on sinks or purchasing bottled water every time you get thirsty. Beyond that, he cautions that some bottled water may not be filtered either.

He notes that consumers should be wary about drinking bottled water, especially over concern that plastic can break down and potentially compromise health. A main component in many plastic bottles contain BPA (bisphenol-a), which has been linked to certain cancers, according to published journal reports in the New York Times. As a result, Pierce expresses concern about bottled water left in hot vehicles and those that sit in hot factories before arriving in stores. 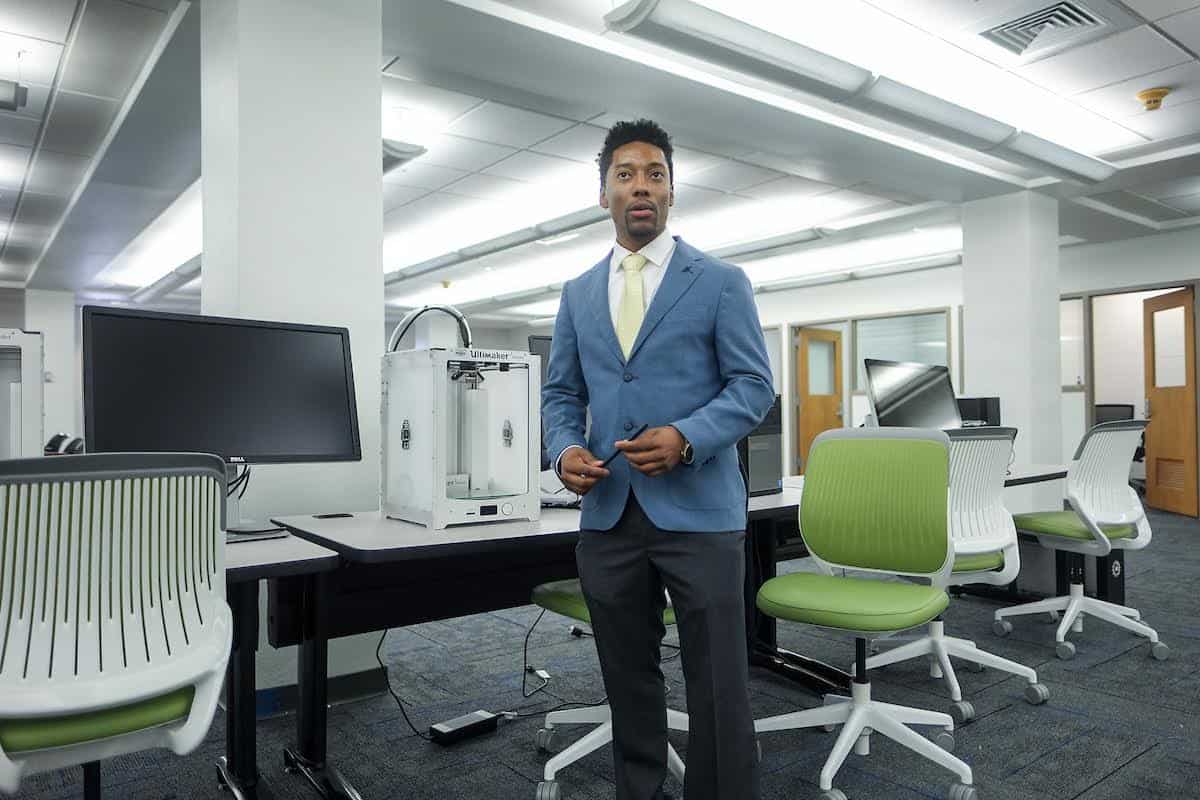 Pierce, 36, is pursuing his master’s degree in technology education at JSU; he earned his bachelor’s in industrial technology in 2017 from JSU’s College of Science, Engineering and Technology. Although he works full time in the IT Department at Jackson Public Schools as a network analyst, he and his collaborators spent years refining the product.

He said his interest in science spawned from observing his father who worked as an electronics field technician and in the radar towers for the U.S. Air Force. “I would see a lot of his equipment laying around, including tools and books on binary and mathematics. So, I was always around it.” As a boy, Pierce was always taking things apart and spanked often for dismantling remote controls. “I wouldn’t care to put it back together; I just wanted to see what the guts looked like, what made it tick.”

Pierce even remembers touring a nuclear power plant (up to a certain point) at a young age. The concept of technology further intrigued him as he realized then that it would lead the future.

The Jackson native recounts sitting outside on a day the city of Jackson issued one of its seemingly persistent boil-water alerts. He thought there had to be better way to cope with the nagging situation. He wondered, “What can we do to filter out the water and not have to continuously deal with the hassle of buying bottled water?” After all, depending on the magnitude of the situation, “space in grocery stores is limited by how much they can stock,” he mused.

His idea for a solution began to crystallize after he and classmates were invited to attend a cyberlearning summit that incorporated business, design and science. That experience introduced him to 3D printing. Dr. Donald Causey, an assistant professor in JSU’s Department of Accounting, Finance and Entrepreneurship in the College of Business, gave participants a challenge to solve within five days a Mississippi problem. Thus, different groups engaged in a head-to-head shark tank competition, with Pierce’s idea gaining overwhelming favor.

Causey said he didn’t expect anything but the best.

“We have some really talented students at Jackson State University. When they are challenged you see them rise to the occasion. The heart of entrepreneurship is solving problems and making life better for people through innovative approaches using technology and creativity,” he said.

Causey cited the water problem with lead in Flint, Michigan, and other municipalities and the lack of clean water in many developing countries. “If you can’t bring a large-scale filtration system to areas because of cost, why not come up with a small portable individual filtration system that can be used when there’s no utility source.”

So, Causey said the challenge was to create a straw that filters water at an inexpensive, safe level. The idea was to design a prototype that could be developed and partner with a company to produce and distribute it. He said 3D printers allowed the idea to flourish further.

To bring the idea to fruition, Pierce would join forces with partner Andrew Willis, now a JSU alum who studied marketing, finance and entrepreneurship. Using 3D technology, a prototype was completed overnight. “It actually came out really well,” Pierce said of the product.

Willis said he’s excited to continue his partnership with Pierce because of Cleanstraww’s tremendous value and future impact.

“This is going to be a revolutionary product. It will change the world and how people think about huge problems. It gives people a greater sense of safety and awareness. With this device we’re taking water purification out of the hands of government and corporations and giving control to consumers.”

Willis aims to make sure the device is profitable and will assist with measured expansion efforts. He envisions widespread use of the product domestically and overseas.

Pierce received his patent June 4 after rigorously completing a prototype.

“The design side was the hardest part,” he said. “And, once you come up with a concept and design type, you have to continue working to perfect it. Doing so will open your mind to different things and for making changes.” Because the cost to construct the filter in the U.S. was hefty – $20,000 to $40,000 – he worked with China to manufacture the mold. From there, however, he built his own device after extensive research and was elated after tests revealed that Cleanstraww successfully filters lead, contaminants and other particles.

He discovered that “grounded activated carbon powder has positive charges that attracts other matter and triggers the contact space to remove particles.” To make all this work, a filter casing material known as PDVF (Polyvinylidene Difluoride) is placed inside the straw. Then, carbon granules are placed inside the apparatus to act as an enclosure, thus locking particles and sediments inside the straw without spillage. This process allows hydrogen and oxygen (water) to pass through the straw freely.

To illustrate the filter’s effectiveness, he sucked up a coke beverage. All the carbon was removed and, basically, the soda was flattened. He tested it on other beverages, including wine. However, to maintain the straw’s longevity for filtering quality water, he doesn’t recommend other uses.

In addressing the safety of the straw, Pierce said the device won’t eject into a person’s throat and lead to choking. “It just won’t happen.”

Furthermore, he said, “I put indentions inside the device to lock in the filter and conducted a pressure test to determine how many pounds of water pressure is required to dislodge the filter. It would take 30 pounds of pressure, and nobody can accomplish that. The average human drinks probably 5 psi (pounds per square inch) from a straw,” he said.

Pierce advocates use of the device in schools, hospitals, on cruises, by the U.S. military, U.S. embassies and in developing countries where cholera and E. coli  may be a major concern.

Although Walmart has shown interest in Cleanstraww, Pierce is working with a nonprofit to brand the product and is seeking major funding to bring it to market. He’s also hopeful for a licensing deal with a firm to produce, manufacture, wholesale the product or buy out his company.

Meanwhile, because of his work, Pierce has been invited to attend the upcoming National Science Foundation’s Legionella Conference 2019 in September in Los Angeles. It will address energy sustainability, public health and emerging issues related to building water systems.

He credits JSU for his successes because “if I had not attended JSU, I would not have made it this far or even pursued this idea. It was just a thought at one time, and that thought became something I could hold in my hand. When I first left JSU my work continued.”

Also, he said, “If Cleanstraww were to become a billion-dollar company, I would definitely come back to JSU and donate money to our school. I have learned from JSU that to become an innovator, you must have vision to see what can happen in the future.”