This article was written by our friend Yussuf Khan over at TheShadowLeague.com (Main photo credit: laxmagazine.com)

I had to stop and press up on the cable remote. Did my ears deceive me or did I really hear that there was an HBCU lacrosse program?

Today at 12:30pm, the Hampton Pirates will officially introduce lacrosse into their athletic stable while officially reintroducing the sport BACK into the HBCU sports fold. Most didn’t know, including myself, that Morgan State actually fielded the last HBCU lacrosse program until the Bears played their final game on May 8th, 1981, a loss to Loyola of Baltimore. But what makes this story even more interesting is that while HBCU lacrosse makes its return today, this will be the first time an HBCU program plays lacrosse at the Division I level. Morgan State was a 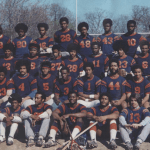 top program in D-II, beating schools such as Notre Dame, Villanova, Michigan State and Georgetown during a five-day span. But Hampton will now be one of the 70 schools in D-I and the first, and only, HBCU program to compete at this level.

And it all starts this afternoon against Roberts Wesleyan College.

We all expect the usual comments and jokes about brothers playing lacrosse will surface and circulate, but the sport is not a new one for Black America. Names like Jim Brown, Harry Alford and Kyle Harrison were prominent figures in the sport, and that’s just on the men’s side of the game.

But these names are associated with schools such as Syracuse, Maryland and Johns Hopkins, programs with big budgets and storied traditions in the sport. So how does an HBCU school compete with these types of programs, particularly at the elite level. Well HBCU schools are all about conquering obstacles and shattering stereotypes and Hampton is no exception.

“Hampton has pioneered so many things, even going back to our founder (Samuel Chapman Armstrong), who pioneered Native American education,” said HU president William R. Harvey. “Let’s look at some things that aren’t traditionally in black schools, such as soccer and lacrosse.

“I wanted to be able to diversify the kinds of outlets our students have. The kids who play in junior high, high school, now they have an outlet. And this is almost equally important: Those kids who did not play but are athletically inclined have an opportunity for an outlet.”

The Pirates’ head coach, Lloyd Carter, was a driving figure behind the schools adoption of the new program.

Carter was a standout lacrosse player for Morgan State. After finishing his collegiate career, he became chief of Emergency Medical Services in Baltimore and then stayed close to the sport by coaching high school lacrosse and founding Black Lax in 2002, an organization whose purpose was to attract more Black players to the sport. In 2011 he helped start the club team at Hampton and in 2015, when the school announced it was moving the program to varsity status, he was named as the team’s head coach.

Click here to read the rest of this article.