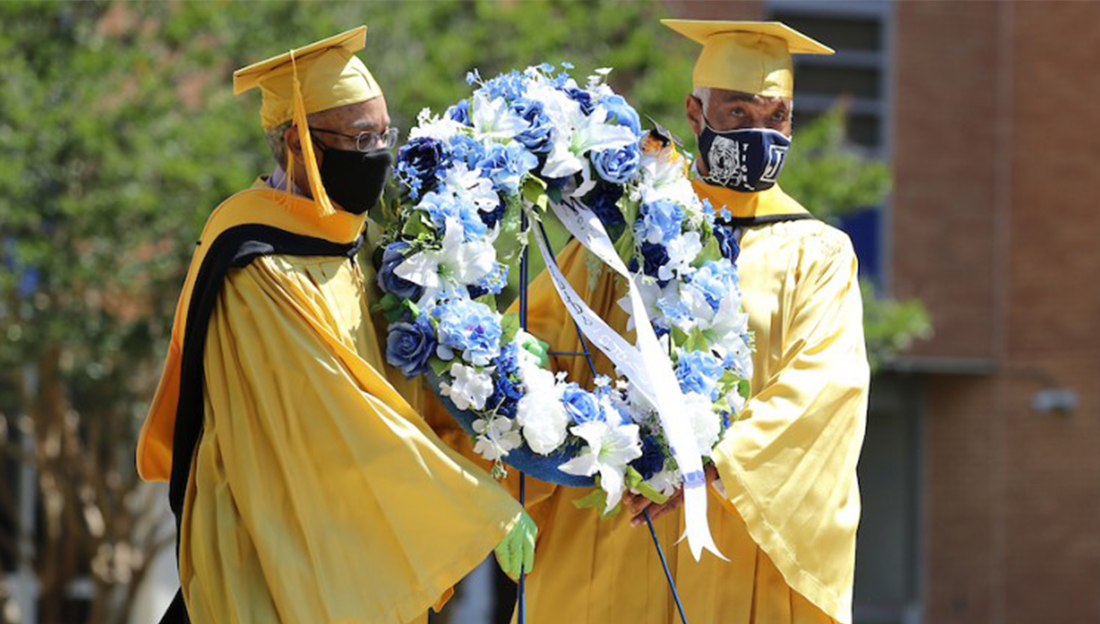 The following article by was sent to Watch The Yard by Jackson State University’s University Communications Department.

(JACKSON, Miss.) — The Jackson State College Class of 1970 finally got to walk across the stage Saturday after campus shootings prevented a graduation back then, and the COVID-19 pandemic nixed the 50th celebration last year.

More than a half-century later, 74 graduates returned to their alma mater, now called Jackson State University. A swarm of media, including NBC Nightly News, joined local affiliates and other news organizations in capturing the historic moment.

The families of the two deceased students were presented honorary doctorate of humane letters, and survivors in attendance were presented golden diplomas after a heartfelt speech by then-JSU President John A. Peoples Jr., now 94.

“I know it’s only by the grace of God that I’m able to physically and mentally stand here and talk to you because I’m no spring chicken,” Peoples said.

The ceremony also was accented by other special moments: remarks from the families of the deceased victims; a formal apology and conferring of the key to the city by the mayor; a proclamation from the lieutenant governor and the state Senate; an honorary high school diploma from Jackson Public Schools; and the laying of a memorial wreath at the historical marker in front of Alexander Hall.

Moreover, in homage to those who died, or who were injured and/or traumatized, the 10 a.m. ceremony for the 1970 Golden Class Commencement took place on the site (now known as the Gibbs-Green Memorial Plaza) where city police and highway patrolmen converged on Lynch Street in front of Alexander Hall.

Tensions had begun increasing throughout the day and late into the night of May 14 and reached a zenith on that fateful early morning hour of May 15.

Nearly 500 people attended the history-making event, which was a stark contrast to a period of tumult marked by racial strife. Back then, “police forces from the city and state marched on our campus and unleashed a barrage of bullets for less than 30 seconds into Alexander Hall,” JSU President Thomas K. Hudson said of the tragedy.

“Two young men with promising futures, Phillip Lafayette Gibbs and James Earl Green, were left dead. Another dozen was injured in the gunfire, and scores of others bear the scars of the physical and emotional injuries inflicted upon them,” Hudson recounted.

To think of these men and women, their family and friends as mere victims of systemic violence aimed at Black communities in this country is to dismiss the remarkable courage and fortitude they have shown for the past 51 years.” Hudson would then praise the survivors as those “who have lived their lives with grace and dignity despite the tragedy.”

The history lesson on racial injustice was an oft-repeated message that echoed throughout the morning from keynote speaker Peoples and other distinguished platform guests.

“You just can’t forget the frightening smell of gun smoke and the sickening smell of blood running down that stairway. I walked up and down the stairwell that night. It was an image you’d never forget,” Peoples said.

He added, “What happened here was just symbolic of the way that the powers that be regarded Jackson State.”

Spring 1970 was one of several consecutive seasons in which tensions had boiled. Some claimed people simply had had enough of the discrimination and racial epithets hurled toward them.

Peoples said, “Our kids were not kids who just existed. They were protesters of the rights that were being denied, and I was along with that.”

After the deaths of Gibbs and Green, the then-president spoke to the faculty and said, “This shall not be unavenged.”

Immediately, the College Board asked Peoples to retract his words because the higher education governing body assumed Peoples was asking students to seek revenge. However, Peoples refused, telling the board then and the audience now, “I don’t recall what I said, but whatever I said I’m not going to take it back.”

He said whispers circulated among leaders that an alumnus shall never again be appointed as president.

“But look what you have now – an illustrious alumnus in the person of Dr. Thomas Hudson, a proud alumnus of Jackson State University,” he said.

Further, Peoples reflected on how he tried to quell anxieties after the shootings had ended.

“We sat on that lawn the rest of that night singing freedom songs.” Later, he went to see who got shot.

“I called the police, and they called out the name of Phillip Gibbs, and his sister screamed,  ‘Oh, God. That’s my brother!’ We took her to the president’s home. My wife Mary helped her to call her family.”

“The plans for this began a long time ago with a promise that I made to (James) Lap Baker, a member of the Class of 1970 who would come and talk to my class at Jackson State. I told Lap that we were going to do this,” said Luckett, also a professor of history and director of the Margaret Walker Center.

“Really, the seeds of it were planted about five years ago as we were leaning toward the 50th,” he added. “And then about 18 months ahead of the 50th (slated for 2020), we launched a commission to begin planning.”

However, he said those plans changed because of the pandemic. “One thing we were committed to was making sure that the 1970 class still got to have a graduation.”

Over the years, many people questioned why it took so long to honor the Class of 1970.

“There are a lot of reasons this did not happen decades ago. They’re honestly rooted in the same reasons that the shootings and the tragedy took place to begin with. There was a history of Mississippi that was steeped in white supremacy and racism that was committed to denying the basic human dignity of black Mississippians who are half the population in this state,” Luckett said. “It’s part of the arc of the fight for social justice.”

He said JSU is grateful that the Mississippi Board of Institutions of Higher Learning (IHL) were supportive of the honorary degrees for Gibbs and Green. He also acknowledged JSU’s administrators, noting that Hudson is an alumnus of Jackson State who knows the history of the Gibbs-Green tragedy.

Among the celebration’s most memorable comments came from Dale Gibbs, who was unable to physically attend because of “unforeseen health problems.” Speaking from her home in Phoenix, Arizona, and despite her continued grieving, the wife of slain student Phillip Gibbs said, “My family and I are thankful that the tragedy that happened 51 years ago has not been forgotten. My husband would be so happy for the recognition that has been bestowed on him today. We are looking forward to attending Gibbs-Green events in the future.

“I want to thank everyone involved who has been diligent and steadfast in keeping the Jackson State tragedy alive. May God bless you all.”

Phillip’s sister, Nerene Gibbs Wray, did attend and spoke to the crowd while accepting an honorary degree in memory of her brother. “I know if he were here he would be very pleased. It is a blessing and a privilege to attend this wonderful event. After 51 years, who would have thought we would have come to this?” she asked.

“Over the years, many people have forgotten. But Jackson State never forgot.”

Nerene said her sister, Mary, residing in Alexander Hall in 1970, shared the harrowing news with her about Phillip’s death. It was Nerene’s responsibility to inform the new widow, with an 11-month-old son, that her husband had been tragically killed.

After awakening Dale, Nerene told her what had happened. “She just sat up in bed, picked up her son and started screaming. For years after that I could still hear her screams.”

Nerene said her sister, Mary, witnessed the entire tragedy and has lived with that horror ever since. “That day was so traumatizing to her that she felt she could not return to Jackson State. I wanted her to be with me today. But she said the memories were just too painful.”

Still, Nerene said JSU remains dear to her family. Her daughter, sister and one of Phillip’s son attended the university.

The second honorary degree was accepted by Gloria Green McCray in memory of her brother, James Earl Green.

“This is déjà vu for me because two weeks after my brother was killed my mother was invited by Jim Hill High school to walk and receive the degree for my brother,” she said.

“To Jackson State, I would like to say thank you. To the City of Jackson, I say thank you. And, to my mother and to God I can hear you say, ‘This is my son in whom I am well pleased.’ And, to James Earl Green, my brother, I just want to say I still miss you. I love you, and I just thank God that your death was not in vain. You were the best.”

Hudson said IHL approved the honorary degree nominations, and JSU was proud to have been able to celebrate Gibbs and Green.

Mayor Chokwe Lumumba said, “I believe as a city, we must publicly atone for the sins of our past and claim a new identity of dignity, equity and justice.”

His signed proclamation reads: “Official apology to the families of Phillips Lafayette Gibbs and James Earl Green. Proverbs 28:13 — ‘Whoever conceals theirs sins does not prosper, but the one who confesses and renounces them finds mercy.’ ”

“This proclamation is not adequate. The state of Mississippi never apologized for the tragedy that occurred on that night. So, since I’m here representing the state of Mississippi, even in my role as a state senator, I’d like to issue an apology to the Jackson State family for the tragedy that occurred that night because they took very valuable lives.”

However, he added, “There were some double reflections – good and bad ones. The bad, of course, is where we were. That’s where the shootings occurred. I was standing in front of B.F. Roberts Dining Hall. That’s where James Green was shot and killed. The opposite side is where Phillip Gibbs was killed. But the important thing about today is that we received something that we should have received 51 years ago.”

Baker said the sting is still there. “I can forgive, but I can’t forget. That was a planned massacre, but God was with us. That’s why only two people died. They came there with a mission – to destroy hundreds of blacks, but it didn’t happen because God didn’t allow it to happen.”

The attorney who had represented the families after the tragedy attended the commencement, too.

“It makes me very happy, but the circumstances that warranted the honorary degrees makes me sad. But, for the families of Philip and James Earl it makes me very happy. I’m very glad to see them after 51 years, and all of us know that James Earl’s mother wanted this. She lived 46 years after the incident in 1970. But we know that she’s in heaven smiling.”

She continued, “For the family, I’m sure it takes some of the sting away. But for me, it doesn’t. There’s still much work that needs to be done to prevent this from happening next month or next year. So, we just have to be vigilant so that we don’t have another example of excessive police reaction to black folks utilizing and expressing their First Amendment.”

Nevertheless, the ceremony was a welcoming delight and keynote speaker Peoples summed up the reaction for everyone who has waited for years.

“We have all prayed that Almighty God would provide the circumstances so that the Class of 1970 would have a formal graduation. Today, it seems, our prayers have been answered. … As God continues to bless all of you, I want you to know I love all of you madly.”