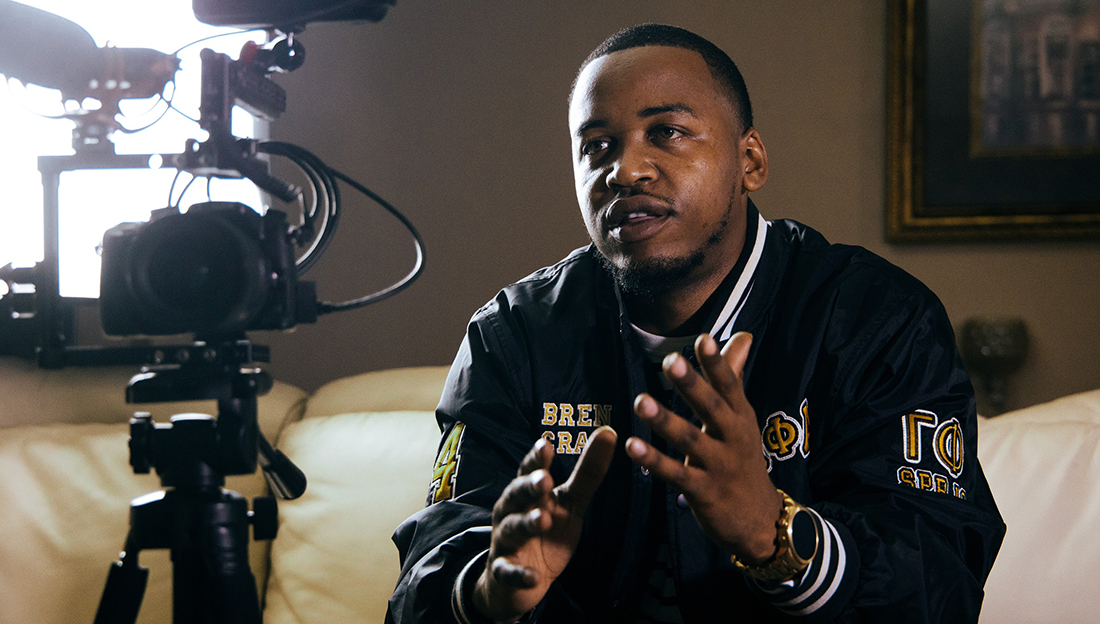 When it comes to hyperlocal media platforms changing the digital media landscape, Brent Craige is a name you need to know.

The 26-year-old, New Orleans East native has used his strategic mindset and media prowess to create Newtral Groundz, a media platform and brand focused on the rich culture of New Orleans and stories that are not getting covered anywhere else.

A Spring 2013 initiate of the Gamma Phi Chapter of Alpha Phi Alpha at Tuskegee University, Craig embodies the soul and mission of Tuskegee in that he has used his studies, grit and self-sufficiency to build a media company from the ground up and contribute to the lives of the people surrounding him staying true to his purpose.

Watch The Yard recently did an interview with Craige about his growth, his company and how Tuskegee and Alpha Phi Alpha helped mold him into the man he is today.

When did you know that you wanted to be an entrepreneur and how did you get started?

I decided that I wanted to be an entrepreneur around my senior year in high school when I was working for McDonald’s. It didn’t take long for me to realize that I had a talent that could be cultivated into a revenue stream. Growing up I played on computers a lot. I also took Talented Visual Arts courses from 3rd Grade to my senior year in high school. It wasn’t until I went to college that I merged the two passions and started my path on a career in digital media.

What made you first interested in joining Alpha Phi Alpha Fraternity, Inc.?

There were a few things that attracted me to Alpha Phi Alpha. The first thing I noticed was the legacy and past members. I felt that the aims were aligned with my personal morals and goals. I also felt drawn to the Egyptian themes portrayed in the Fraternity’s branding.

What sealed the deal for me was the brothers I met at Tuskegee. Antonio Minifield, one of my prophytes, recruited me to be a part of his SGA President campaign after I won Freshman Class President in 2011. He won and appointed me into the SGA where I gained priceless experiences. Other influences include prophytes like Malik, Osei, and Johnathan Tyler Allen. They all showed me that you could move how you want in life without compromising your livelihood. Keenen Ivory Wayans is also one of my biggest influences and he happens to be a Gamma Phi brother.

How has your experience at Tuskegee University developed your entrepreneurial path in life?

So after Tony appointed me into SGA as the Executive Secretary, he started something called the SGA Media Team that he appointed me chairman of. When I first went to Tuskegee I saw the lack of digital resources for students and recruitment purposes. This led me to pick up a camera and record SGA events, and Greek Weeks. Tuskegee also didn’t have a communications program at the time which was detrimental to its legacy and history. Tuskegee has a rich history that is drowned out because of weak media infrastructure. After the media team saw the success I changed the name to Tiger Press referencing our mascot the Golden Tiger.

Tiger Press had a media website, Instagram page, youtube page, and garnered thousands of views. This was surprising due to the fact that Tuskegee had no media market. We did a lot at Tuskegee that included covering events, throwing private movie screenings, hosting award shows with headliners like Young Thug, and producing a documentary based on historic Tuskegee keynotes speeches called “TheTrajectory”.

Our biggest accomplishment was a talk show that aired on public access in Tuskegee called “That’s Official”. The show was co-produced by me and my line brother Marlon aka DJ Skeme. It starred two Deltas, twins Monique and Dominique Fitchard as well as our line brother Frankie, and neo Denzel. The show was the talk of the town and what I credit my editing skills to. Booker T. Washington taught us to use what we have to get the job done. A lack of resources isn’t a deterrent. It breeds innovation.

What is the overall mission of Newtral Groundz and how do you see it impacting your city?

New Orleans and Tuskegee have a lot in common. The big difference is that New Orleans actually has a market and a large population. Both places are rich in history and have weak media infrastructure. The problem with New Orleans media is that our publications aren’t rooted in the culture. There was a time when local publications were actually owned and operated by people from the city. Now the media is controlled by capitalists who use fear-mongering and exploitation to maximize their output from their stories. This is good for their pockets but it harms the population. Propaganda is one of the most powerful social and political tools in history. The current state of New Orleans has a lot to do with its history of corruption in housing, education, and media.

I feel that a homegrown publication is needed in today’s climate where credibility is everything. New Orleans is also historically based. This means that the narrative needs to be controlled by people who can protect and understand our heritage. Education for the youth is important as well. Our slogan is Big News, Easy Access. We want to be accessible to people who want to learn media and use it to grow their brands and businesses. If we change the narrative of New Orleans, we can change the mindset of our people. That’s where change happens over time.

Since starting Newtral Groundz you’ve teamed up with big names in the music industry what are some of the projects you are most proud of?

Honestly one of my most memorable projects just dropped two weeks ago. We partnered with a historic brand Phat Phat N All That to put together a full-length documentary on our Youtube Channel telling the story of the Magnolia Projects. This project is important because it entertains and educates. In the documentary, I aired never before seen footage of Soulja Slim, and Juvenile. I also interviewed music legends like Slim the Founder of Cash Money Records. The documentary focused on the various elements that made the Magnolia Projects the most infamous projects in the United States. We also touch on gentrification and the impact that housing had on the culture of New Orleans. The documentary is called Enter The Magnolia and is out now.

I’m currently co-producing Season 2 of JahzeTV’s Mixed Company. Jasmine Yvette and I have worked together as press during Essence Fest for two years and this was a great chance to make something special. Our line up includes Wuzzam Supa, PJ Morton, Big Freedia, Fee Banks, Mousa, Tank, and a few more who we haven’t disclosed.

Another brief mention would be my sit down with the original Freeway Rick Ross. I caught him while in town thanks to a connection from Tru E Nation a friend of Corey “C Murder” Miller. We had a great talk that is also available on our youtube channel.

Why are independent media companies so important during this specific moment in history?

I stated earlier that we live in a time where credibility is everything. There is so much fake news floating around that you don’t know what to believe. That’s why micro media publications are important. The publication is owned by Newtral Groundz Media, LLC, our marketing agency. The goal of the marketing agency is to provide tools for brands and businesses to empower them. It’s all about empowerment. The reason why we talk so much about our history is that it empowers people to know where they came from. With all of the madness going on we need trusted platforms to decondition the masses from weaponized media.

Where do you see Newtral Groundz five years from now?

In five years I feel that we will have built upon our News, Film, and Digital Media offerings. Our business will be scaled and community programs will be in full swing. We also are in the developing stages of our first product that will be released soon so I’m excited about that.

You’ve got a wealth of knowledge on branding. What is one tip you have for a Black fraternity/sorority chapter looking to improve their branding?

Use your history to your advantage. We come to probates for one reason and one reason only, information. Whether it’s poems or revealings, we care about the information. Find creative ways to tell your chapter stories using a digital medium. Attach a product to it and raise money for your chapter. Another idea could be starting a Youtube chapter channel. There are ways that your chapter could be trained in digital marketing, while making money, and expanding awareness.

Why is it important to have a digital platform like Watch The Yard at this moment in history?

There wouldn’t be a Newtral Groundz without Watch The Yard. Watch The Yard is the perfect example of a micro media publication done right. When I first reached out in 2015 sampling my work I didn’t know that it would result in Watch The Yard’s CEO Jonathan Rabb giving me the idea to start Newtral Groundz. Being connected to your audience can ricochet into other things that help people you don’t even know.

Watch The Yard also shows independent creators that you can have a big market aesthetic on a growing brand. Your brand doesn’t have to look like you don’t have a lot of followers. Aim high when it comes to branding and the following will grow as a result. They’re thousands of Black Greeks who need a platform they can trust and benefit from. The professionalism Watch The Yard displays along with its care for our community is unmatched. Watch The Yard gave me the blueprint and that’s how you ignite change.

What is next for Brent Craige?

A documentary on the history of Gold Teeth in August, and a No Limit Documentary dropping at the end of this month.