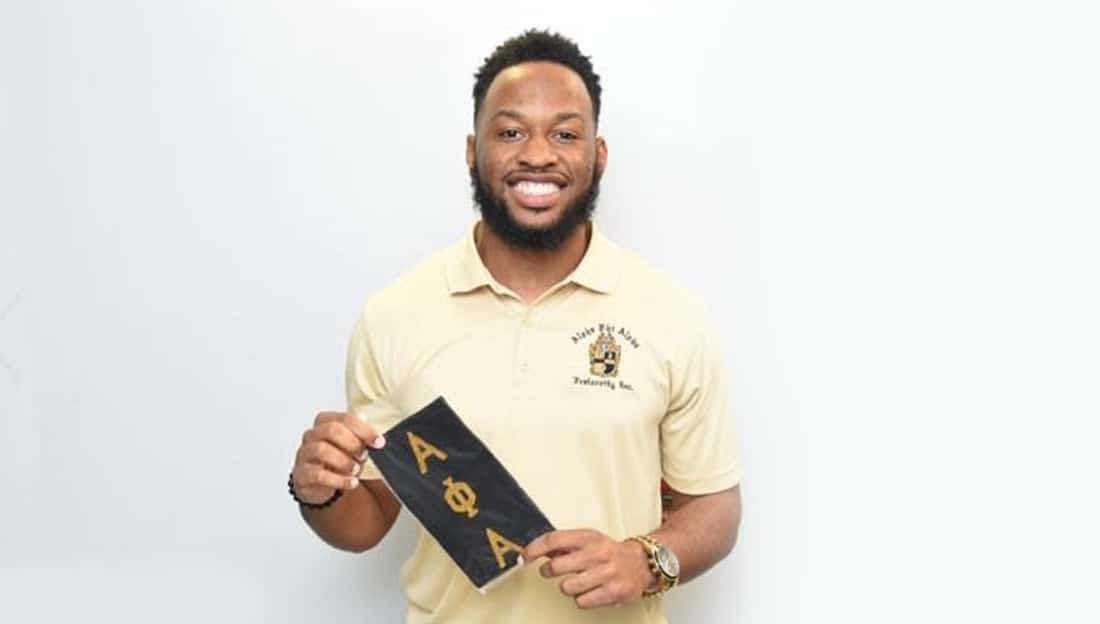 In an effort to highlight the young leaders who are leading undergraduate chapters across the nation, we at Watch The Yard reached out to the brothers of Alpha Phi Alpha Fraternity Inc.’s Nu Phi Chapter at Coastal Carolina University and did an interview with Joshua Jenkins the president of the chapter.

The position of president of an undergraduate chapter of a Black fraternity is a highly respected role and there is a special pride that one takes. 21-year-old Joshua Jenkins has used the position to gain new leadership experience, improve the lives of other students on campus and help the community around him.

We interviewed the Biology major and talked about his position, goals, future and what it means to hold a leadership position on campus in the digital age.

What does it mean to be a chapter president to you?
Chapter president means being the leader and face of your organization, essentially. When people look at the qualities of what an Alpha is or should be, they should see that truly exemplified in the chapter president. The president should also be the primary point of contact and liaison for all departments on campus. The president should not be a dictator telling everyone what to do and falling back, but should be on the ground working with everyone around them to get the task accomplished. Finally, the president should be a mediator of conflicts, being able to remove bias and control the room to resolve situations. Being level-headed and using a good balance of logic and emotion is always important to me.

What made you decide to attend Coastal Carolina University for undergrad?
Coastal Carolina University was (and still is) definitely up and coming. The school was growing, the athletic programs were on the rise, and I saw in opportunity to be apart of the growth and build something that the people could be proud of. It was not a large campus like USC or Clemson, but I wanted to set the foundation for Coastal to get there. My best friend applied (I had never heard of the school), and they ended up being the only school to give me scholarship out of the 3 I applied for. My mother made it a point to not go into debt, so I had to take it. 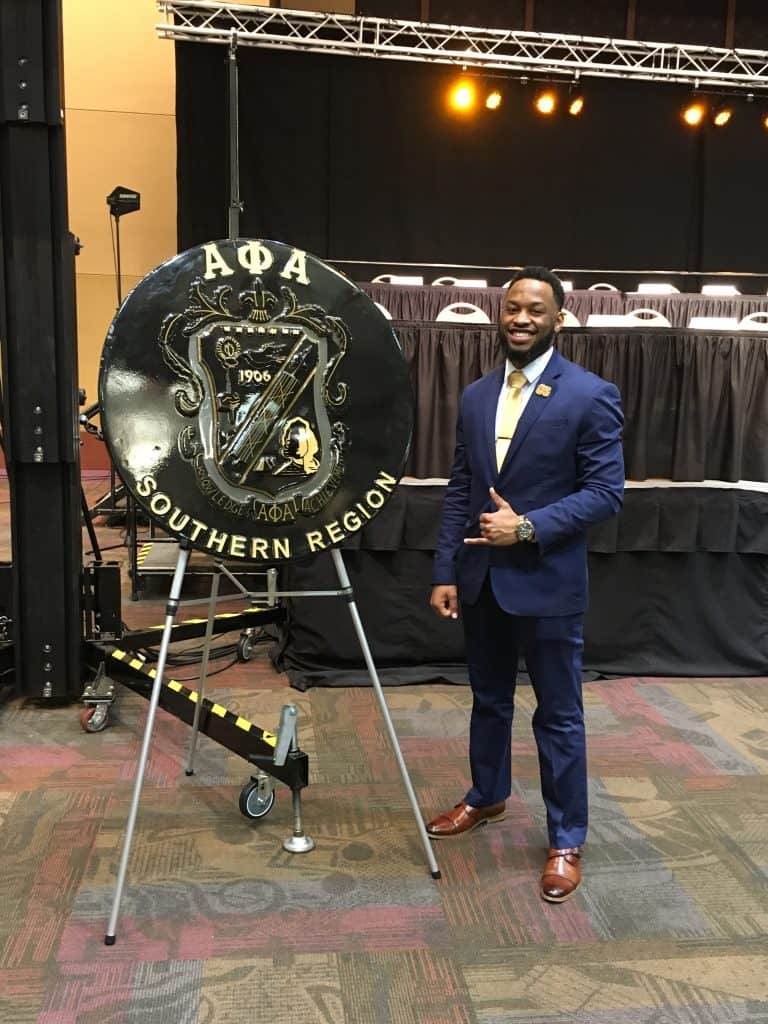 What specific initiatives is your chapter heading up this year and how do you think they will improve the campus/surrounding community?
Alpha Madness- a March Madness theme that will have a month full of events. This will include social events and educational forums that can better the campus and people in the surrounding areas that are able to come. We are also in the local high schools teaching young men the importance of not only finishing high school, but also going to college to obtain degrees for the career they desire. We are also looking into new ways of interconnecting and showcasing the local businesses and talent on our campus. So many young people with great ideas; there needs to be a way for that to be seen farther than just our campus. So many great ideas, they just need to have a solidified plan. Just be on the lookout for what we have next.

What made you want to pledge Alpha Phi Alpha?
I always told people that I was born in the wrong era, and wanted to be apart of the Civil Rights Movement, protesting and what not. While doing research, I saw that Alphas spearheaded that movement, and a lot of the people I looked up to growing up were Alphamen (Thurgood Marshall, Martin Luther King Jr, Keenen Ivory Wayans, Roland Martin, and recently Omari Hardwick). I wanted to be a part of something greater than myself; I wanted to be apart of a brotherhood with like-minded individuals. The Aims: Manly Deeds, Scholarship, and Love for All Mankind were also things that resonated with me, and were traits I felt that I exemplified. A lot of black males that I saw in the science buildings and classrooms were also Alphamen, and that resonated with me. Also, me wanting to be a medical doctor was inspired when I read a quote that over half of black male doctors are Alphamen– great networking opportunity. Essentially, the impact and image that Alphas had nationally, through history, and on campus really inspired me to join this Illustrious Fraternity. The real attention grabber though was this quote, “not all great men are Alphas, but all Alphas are great men.” Why would I not want to be a part of that greatness.

What is it about your specific chapter that makes it so unique?
We are the Too PHly Nu Phi Chapter. Every Tuesday we are dressed up in suits and ties to not only keep up the image of Alphamen, but also show that black men do not have to have a presentation or court date to be dressed up. I feel that we have an image unlike anyone else. We also have a variety of majors and are involved in many aspects of campus. We have brothers in Student Government, Housing, IT, and the Activities Board among others– you cannot go anywhere without seeing Nu Phi. We try to have our hands in everything. The faculty and other orgs love us, and they know that they can come to us when they need something done. We are also such a tight knit group. People can always see us on campus or outside and we are together. We are getting the work done inside and out. The people know that. Finally, we are the first of ALL Greek Letter Organizations on our campus. That is a big deal for a Predominantly White Institution. Also a big deal that we have been crowned the largest chapter at a PWI for our region. 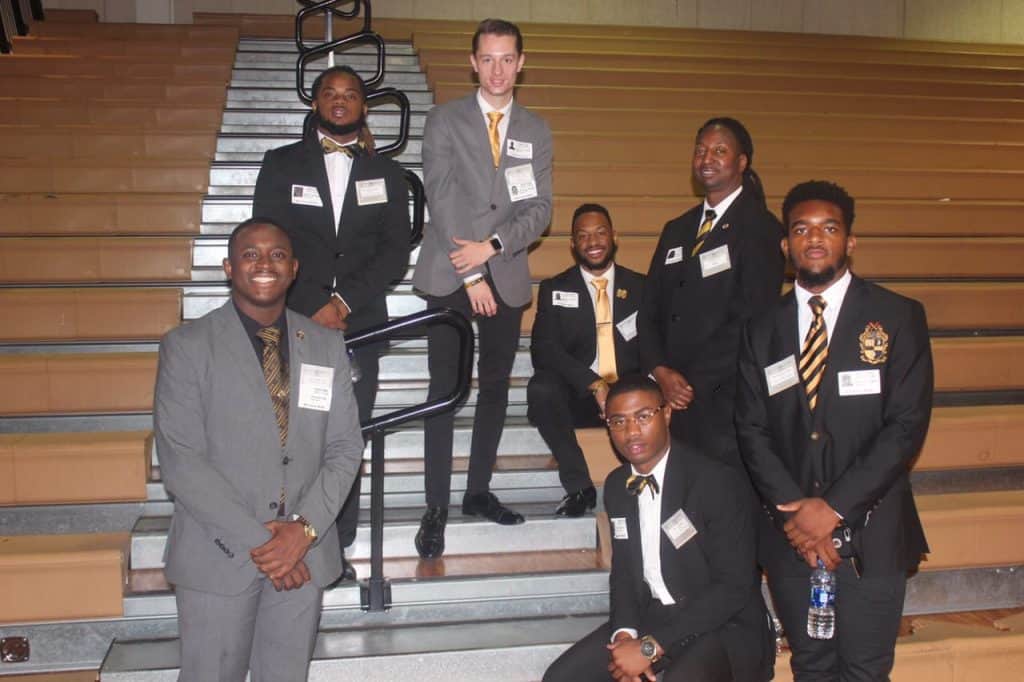 We now live in a digital world, what do you think undergraduate chapters across all orgs need to do to represent themselves online in 2018?
Utilizing more opportunities like this to showcase what we have to offer. You never know how this article could somehow inspire a Brother in Colorado or wherever. Social media image is also very important, so making sure people come correct with what they post online so that the outside world can see us in a manner that would make our Founders proud. Sad as it is, we may need proper social media etiquette training. I also think the Prophytes app is cool. If only we could make sure more people were using it to connect. I honestly wish I used it more. I love the concept though. We have the tools, we’re using our social media platforms exceptionally well, we just need to expand on them.

What does leadership mean to you?
Leadership means being on the front-lines with those around you, as opposed to standing in the back telling everyone what to do. That’s a boss in this sense. A leader should also be a positive role model to those around them, being someone that the people would want to be like. A leader should not lead the people in the wrong direction. A leader should also be able to listen and take criticism. That allows for growth into becoming an even better leader. A leadership should definitely be about growth, and ultimately better everyone around them. First to come and last to leave, making sure that everything is executed properly. It’s all about sacrifice and accountability. It’s tough, but it’s what you signed up for. What makes it more comforting though, is the fact that the people saw enough in you to vote you for that position. They believe in you. You cannot let the people down with those types of circumstances. 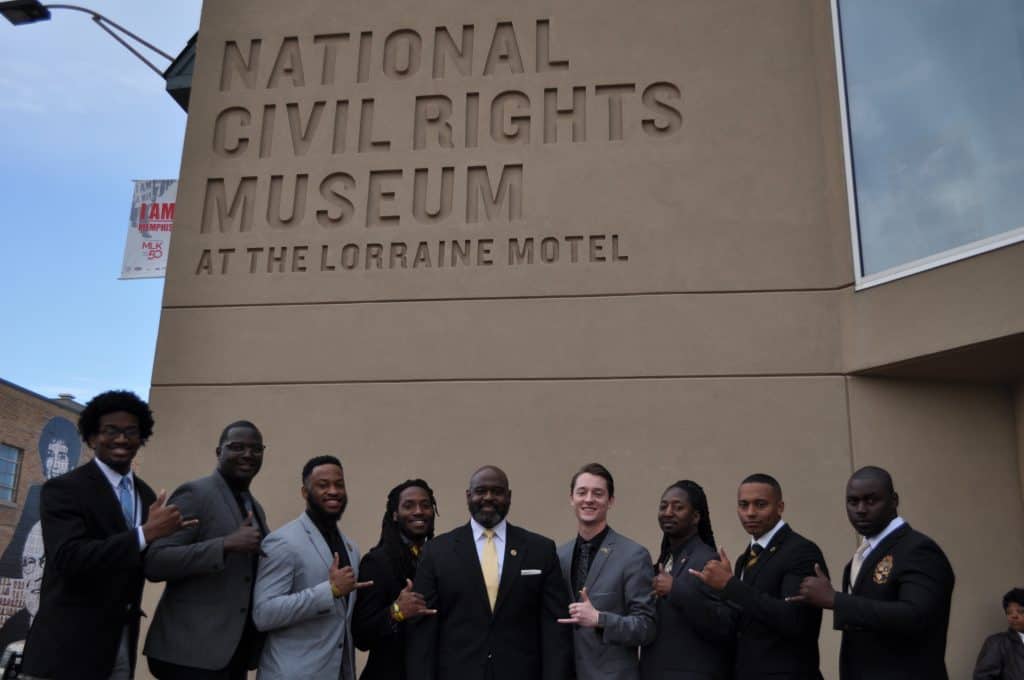 Why do you think Watch The Yard is important to Black greekdom?
I love me some GS3 and the constant entertainment they provide to me, but Watch The Yard provides the positive aspect of Black Greekdom. They showcase us in the manner that we are supposed to be seen as. It’s so inspirational, and I love seeing the other chapters and orgs doing great things. Reminds me why I joined.

What does brotherhood mean to you?
The most important aspects of Brotherhood to me are accountability and sacrifice. Ultimately having a group of people that you can rely on no matter what the circumstances, and essentially push you to be a better version of you. Sad to say, but that’s not something that I get from all of my friends. Few get the concept, and that’s why they’re still here after all of these years. If something needs to be done, the person that a Brother should look to should be another Brother. A Brother should never feel alone in this walk through life. That’s the point of joining a Brotherhood. The crazy part is getting this feeling from a person you’ve never met before, but knowing that the relationship is good based off the fact that this man is an Alpha. Even from a different chapter. It’s kind of like going to a family reunion. You see a person that you’ve never met before, or haven’t seen since you were a baby, but you have nothing but love and respect for that person because they are family. These excerpts from one of my favorite poems, “He Ain’t Heavy, He’s My Brother,” by Bro. Freeman Montague Jr. might explain it best.

“Our family trees are not the same; we both have a different mother
And yet I’d proudly tell the world that this man is my brother.
It’s like we’ve lived our lives together, though we meet for the first time.
As this powerful sense of brotherhood makes everything seem fine.
Spectators stand and look with awe as we do our secret shake.
Never realizing that this clasping of hands DOES NOT a brother make.

We are brothers in a deeper sense than they can comprehend.
For when our bond has just begun, theirs is about to end…”

“…There is nothing in this whole wide world that we wouldn’t do for one another.
I’m sure I’d even give my life to save that of my brother.
But there are still those in darkness who cannot understand
why I share the burden which belongs to another man

When asked “Why weigh yourself down with the load of another?”
I simply smile at them and say,
He ain’t heavy, He’s my Brother!!!…”

This bond is just something that we cannot explain, and you will never understand if you aren’t A-Phi. 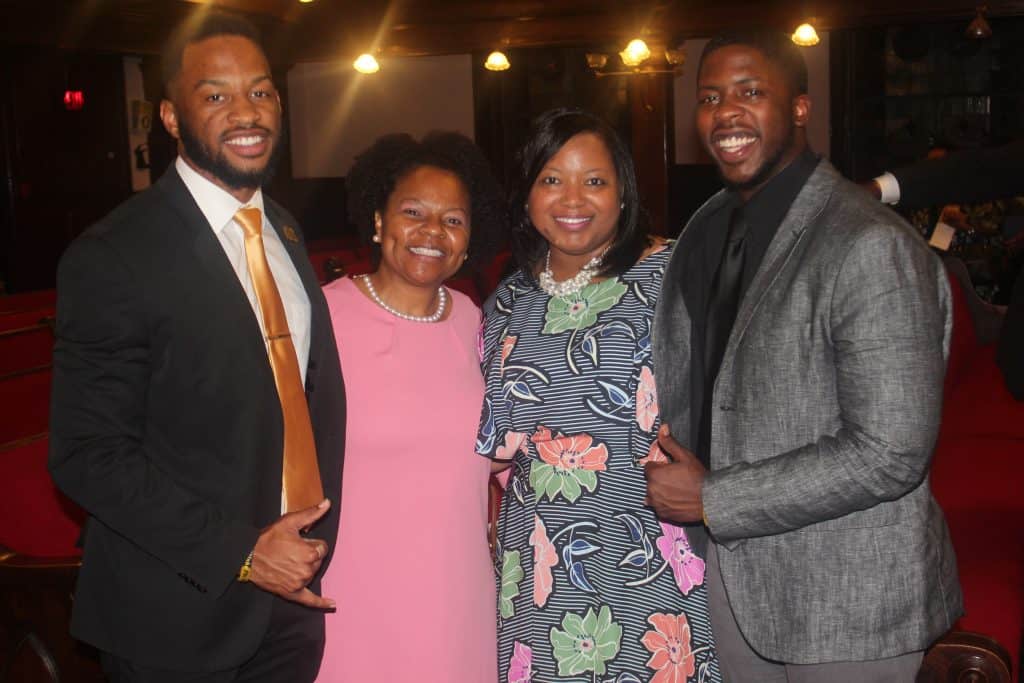 What do you plan on doing after graduation?
Actually at the time that I am writing this, I am 5 days from graduation. After that, I will continue working as Medical Scribe and studying for the MCAT to begin my journey to Medical School. I plan to work in predominantly black, underserved communities. Hopefully seeing a black doctor would invoke an improvement in health in the black community. I also hope to be a role model to the youth, and inspire them to work in the healthcare field. We need more black doctors. Seeing black doctors was my biggest inspiration growing up, I just want to pay that forward. Be on the lookout for Dr. Joshua J.M. Jenkins in the years to come. 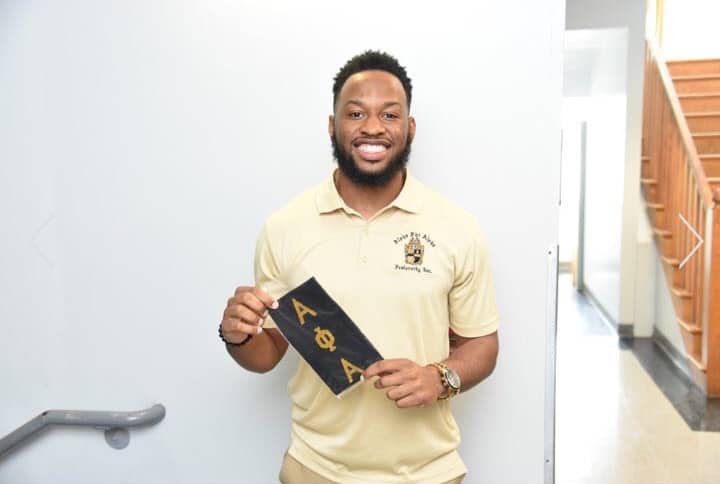 We at Watch The Yard would like to commend Joshua Jenkins for his work as the president of Nu Phi Chapter which has a long legacy that spans back to 1978.