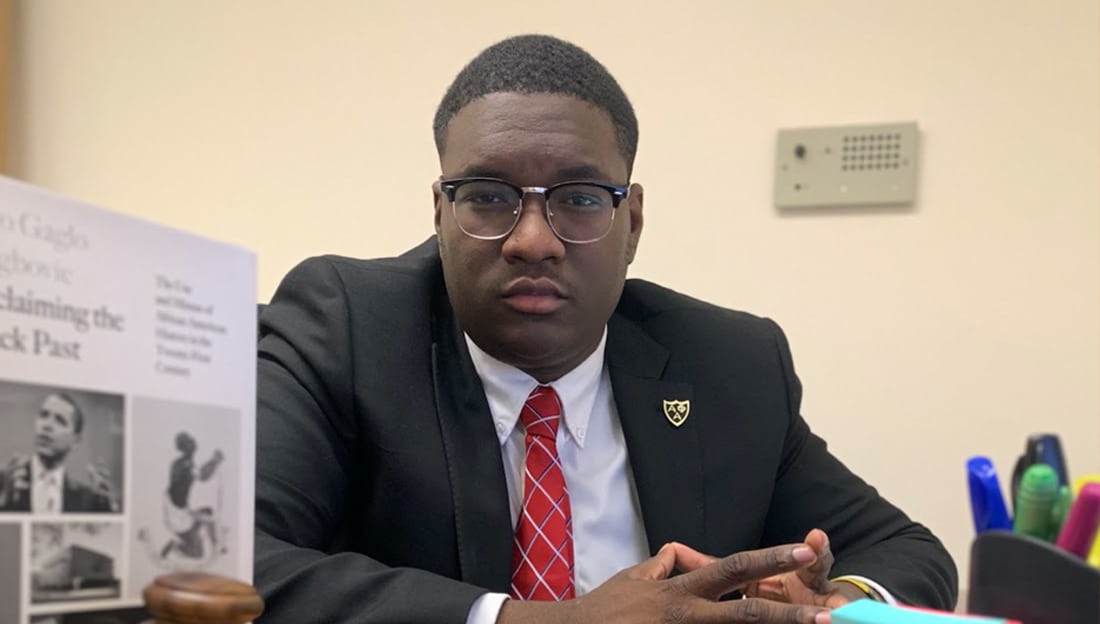 In an effort to highlight the people who are leading graduate universities  across the nation, we at Watch The Yard reached out to The City College of New York and did an interview with Frantzy Luzincourt the Student Government Association president.

The position of SGA president of a is a highly respected role and there is a special pride that one takes. Luzincourt, who is majoring in Political Science, is a current senior and a Spring 2018 initiate of Alpha Phi Alpha.

We interviewed Luzincourt, and talked to him about his position, goals, future and what it means to hold this type of leadership position in 2020.

Priorities. Understanding that as student government president, it’s not about you but what you represent and that the needs of the students come before all. The strength of my voice comes from being a representative of the collective and diverse voices of the student body. Serving as president has been a constant learning experience that has shaped not only my leadership skills but my character as well. Being dedicated to a single mission, bearing the burden of being the voice for tens of thousands of students, and working with a team of student leaders with each of their own ideas and personalities has pushed me in a way that I did not expect. Overall this is truly an experience of a lifetime, and there is no better feeling in the world than being able to help a fellow student and making their college experience more worthwhile.

What made you decide to attend The City College of New York for undergrad?

The primary reason I decided to attend The City College of New York (CCNY) was because I was fortunate enough to be admitted into the Macaulay Honors program at the City University of New York. The program provided me with a full-tuition scholarship and for the last couple years has consistently received the highest rating for a public university honors college. I knew I wanted to attend graduate school in the future and as the youngest child of the family, this was the best decision not only for my academic career but for my family’s economic situation as well. Additionally, CCNY has a robust Political Science Department with several fellowships relating to law and public service: my two main career interests. I wanted to attend an institution that had an abundance of opportunities that would embolden my experience outside of just the classroom. CCNY is also the flagship college of New York City founded as the “Free Academy” in 1847 with the goal to educate all people and “whether an institution of the highest grade, can be successfully controlled by popular will, not by the privileged few” (Dr. Horace Webster, founding President). That core value amongst the backdrop of the historically rich neighborhood of Harlem sealed the deal for me.

How has The City College of New York molded you into the person you are today?

The City College of New York is one of the most diverse institutions in the nation and that has been reflected in practically every part of my college career. Throughout the years I was able to learn so much about the world and my community because of the diversity of people surrounding me and the wealth of knowledge from their lived experiences. As a commuter school in New York City, I was exposed to people starting their collegiate career from different stages, not just the traditional student that came straight from high school. I was also fortunate enough to take advantage of the opportunities available and as my campus involvement increased, my empathy as a leader grew. The ability to talk to students and commit to addressing their needs molded me in ways that I will always cherish. Their stories fueled me as I championed for the resources they needed whether it was to the local campus administration or representatives of the state and city government.

Under my administration the goals of this year’s Undergraduate Student Government include reigniting school spirit, reclaiming student space, restoring basic dignity, and representing the student body to the best of our ability. For school spirit, we’ve organized the college’s first ever Black History Month Dynasty Gala celebrating the African Diaspora. In terms of student space, we’ve established the new Student Union space and hosted workshops on organizing in addition to partnering with local activist groups on campus. For basic dignity, we’ve fought tirelessly to end food insecurity on campus and supported the opening of the campus’s inaugural food pantry. Furthermore we’ve also worked with elected officials to pressure the administration to open the school’s long needed child care center service for our student parents. Lastly in regard to representing the student body, as a student government we’ve organized rallies and met with elected officials at each level of the government fighting for the expansion of opportunity programs, mental health resources, and increased financial aid. Before we transitioned to distance learning we were working on initiatives at the beginning of the spring semester that include expanding the languages and minors offered, implementing feminine hygiene dispensers on campus, and passing a referendum that would better distribute and utilize student funds.

Currently the City College of New York, a part of the City University of New York (CUNY), has implemented distance learning for the spring and summer semesters. They’ve also ordered over 30,000 laptops to support students who need technology in order to continue their studies. Basic services on campus are still being provided in addition to now online mental health counseling and an on campus food pantry that is opened per request for the student body. As a student government the first thing we’ve done is create a google response form for students to voice their concerns during this time and we’d provide assistance to each student. We are also rolling out an emergency COVID-19 relief fund in collaboration with the CUNY University Student Senate to provide students with economic support that can help with any needs that may come up. Additionally, we plan on providing resources to the displaced students with supplies and toiletries. As president I also worked with the other university leaders across the City University system to advocate and design an academic policy that best accommodates students during this period, Our duty as a student government and representatives of student interest is to provide students with the most updated information, provide them with or point them in the direction of those resources, and address all their needs to the best of our ability during the pandemic. Despite all the changes going on, our mission and goal remains the same.

Unfortunately we are no longer having in person elections but I worked with the Student Election Review Committee to set up an online election apparatus that will allow elections to still take place this spring semester as scheduled. We are committed to making sure the election is as accessible as possible to the entire student body even if electronically administered. It is imperative that student voice is represented and that the incoming elected student leaders can get to serve the students as soon as possible.

Simply put, leadership to me means service. A true leader acts in service of a vision, one that inspires, empowers, and uplifts those around them. People often think that being a leader is an individual task but in reality it’s about the collective. People decided to place their trust in you with the belief that you’d uphold their best interests and it’s your duty to do just that. As student government president I never take my position for granted. I am extremely humbled that the student body decided to vote for me and there isn’t a day that goes by that I forget that and aforementioned is the fuel that drives myself and my entire team. A saying that I repeat often is “pay it forward”, and this is representative of my belief that true leadership includes the ability to develop additional leaders.

I believe in 2020 schools should increase their digital student engagement in order to best represent themselves. Posting program flyers and resources should be the bare minimum and social media applications can be used to further the school’s brand and help students feel a part of their college community. For an effective institution I believe student voice is necessary and being in such a digital world, this only allows for more ways to include that. As the world continues to further develop innovative technology, schools should tap in wherever possible to improve the educational experience of their students.

Watch The Yard is important because it provides a hub for the black collegiate community and connects people across the country despite their connection to the black college experience. After joining Alpha Phi Alpha Fraternity, Inc., Watch the Yard only enhanced my Greek experience, because it offered a digital home that serves as entertainment, shares resources, and highlights people who are really making an impact in their communities. I am a huge proponent for preserving and promoting HBCU culture because it is really important and serves as an inspiration to the entire Black community. Watch the Yard has made me admire and respect HBCU institutions and what they do more than ever before.

After graduation I plan on working for a law firm as a litigation paralegal. Then afterwards the goal is to pursue a joint Masters in Public Policy and law degree. As of now my career goal is to become a progressive prosecutor using the tools of that office to reduce mass incarceration and increase fairness in the criminal justice system, ultimately repairing the trust that has been broken over years in lower income and black and brown communities.

We at Watch The Yard would like to commend Frantzy Luzincourt for his work as the SGA president of The City College of New York.

Share this on Facebook and help us highlight Frantzy Luzincourt and The City College of New York.