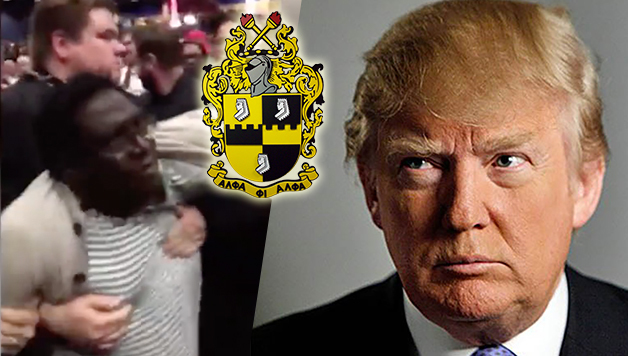 This was originally posted on December 15th, 2015

A brother of Alpha Phi Alpha has made national news after he was seen being forced by security out of a Donald Trump rally yesterday.

In a video which has received national attention from CNN and Yahoo News, Bro. Ender Hope Austin III, speaks out against Trump during the rally and is dragged out of the building through a crowd of Trump supporters who scream at him. At one point someone in the crowd even yells “Light the mother f*cker on fire” at him.

According to Yahoo news, “The commotion began shortly after Trump, who is currently a frontrunner in the GOP primary, took the stage. Trump invited a supporter named Jamiel Shaw to join him. Shaw’s son was shot and killed by an undocumented immigrant gang member in 2008.”

“I always ask people, what would you do? What would you do if an illegal alien in an 18th Street gang was released from the county jail you know and into our neighborhoods?” Shaw asked the crowd. “We don’t know what’s going on. That’s why we need Donald Trump.”

When Shaw started speaking, Austin, who happens to be a member of Alpha Phi Alpha, began shouting, “That’s why we need gun control!” and “If there were no guns he wouldn’t have got killed.”

Austin, who is a Pentecostal minister, was attending the event with a group called “Unity Vegas” was quickly grabbed by casino security and the altercation was videotaped by a BuzzFeed journalist who was on the scene.

Austin told Yahoo News that, “he had planned on staying at the rally, but felt he needed to interject when he did because he believed Trump was unfairly using the death of Shaw’s son to justify anti-immigrant policies.”

“The majority of issues with gun violence are not with undocumented persons,” Austin said to Yahoo News. “And to parade that as though this is the reason why we should deport millions of people and destroy millions of lives was disturbing to me.”

Austin added that his “heart is with” Shaw’s family for the “loss that they’ve endured.”

Watch the video below.

While having security staff remove protesters or hecklers from campaign events is commonplace for just about all candidates on the 2016 trail, Donald J. Trump's security staffers are aggressive about removing demonstrators, who have become a frequent presence at Trump events. cnn.it/1OtVyQ1