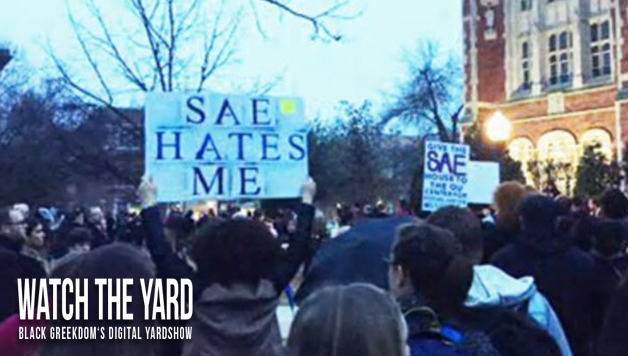 At approximately 10:02pm on March 8, 2015 (the 50 year mark of Bloody Sunday) I was alerted via Instagram that a video had leaked showing alleged members University of Oklahoma chapter of Sigma Alpha Epsilon Fraternity performing a sickening racist chant. I had just finished watching the famous ESPN 30 for 30 “The Fab Five.” If you’ve seen this specific 30 for 30 then you know that in the early 1990s five African American men showed up on the University of Michigan campus and quickly became internationally famed basketball stars. Unfortunately, with that fame also came a tremendous amount of hate and bigotry because of their non-conforming approach to the sport and society at-large. As I watched this documentary, for the second time, I channeled my inner 6-7 year old self and was almost brought to tears of sadness knowing that early in my life the world remained so full of hate and filled with a lack of understanding. Today, on the brink of turning 30, I unfortunately, was not surprised by the video portraying young men and women use hateful and hurtful language with such conviction and joy.

As the seventh Black Regent at the University of Minnesota, a soon-to-be three-time alum, and proud member of Alpha Phi Alpha Fraternity, I urge people to use this as an opportunity for growth. No doubt, there is justified emotion in the form of anger and sadness. However, this should not be a debate about Predominantly White Institutions versus Historically Black Colleges and Universities or African American and Multi-Cultural fraternities versus White fraternities. This is an issue for all of US. The harsh reality is that this not an isolated incident. This is not an “OU problem” or an “SAE problem”. This happens all around our country and these are thoughts that people carry with them; either locked away deep inside or expressed overtly, as in the video we have seen.

I will admit that I am torn. While I am appreciative of the swift response by the OU president, I do not think these individuals should be expelled from their university as many online have suggested. I do, however, believe they should be expelled from their fraternity, if, in fact, SAE is going to live out its values that contradict those expressed in this video. At a public institution, they have the right to their beliefs and their thoughts. If we cannot express ourselves at a public institute of higher education then where can we?

As I return to working on my own research I recognize that this op-ed only begins to capture the nuances and complexities of this issue. However, I felt obligated to make an attempt at beginning a conversation with humanity at the forefront. Let us have a conversation of productivity rather than cyclical discussions that lead to no end.